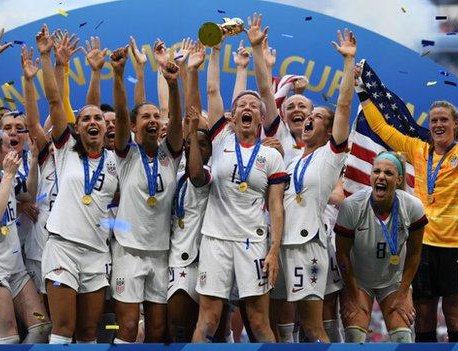 The United States won the Women's World Cup for a record fourth time as they eventually overpowered the Netherlands in Lyon.

Megan Rapinoe's penalty and Rose Lavelle's fine run and finish gave the defending champions victory in the second half, after resilient first-half defending from the Dutch.

Veteran winger Rapinoe's calmly-slotted opener came from a spot-kick awarded after a video assistant referee (VAR) review, at the end of a tournament in which the system has been a major talking point.

Barcelona defender Stefanie van der Gragt's high boot caught USA striker Alex Morgan and French referee Stephanie Frappart pointed to the spot after assessing replays, and the holders did not look back after taking the lead.

The European champions, reaching the final in only their second World Cup, kept the favourites at bay in the first half as former Arsenal goalkeeper Sari van Veenendaal produced four excellent saves.

But the USA, playing in their third consecutive final, continued their reign as the world's finest side as they added to their titles of 1991, 1999 and 2015.

Rapinoe's goal also meant she won the Golden Boot after finishing with six goals and three assists, while she also took the Golden Ball award for the tournament's best player.

Victory for the USA saw their English-born boss Jill Ellis, from Hampshire, become the first coach to lift the trophy twice.

Her side's second consecutive world title was a hard-fought one, but they have been the best side in a 24-team tournament that was fiercely contested, despite facing more serious trophy contenders than four years ago.

They laid down a daunting marker in their first match of the competition as they cruised to a 13-0 win over Thailand - the biggest-ever victory at the finals.

Comfortable successes over Chile and Sweden followed, before they faced three much more detailed tests of their title credentials in the knockout rounds but battled to a trio of 2-1 wins over Spain, hosts France and England.

In 2015's final in Canada, the USA took a 4-0 lead over Japan inside 16 minutes, as a Carli Lloyd hat-trick helped them win 5-2, but the Dutch posed a far stiffer test.

Sarina Wiegman's side, who beat Sweden in the last four on Wednesday, did well to absorb pressure from the USA in the first half and counter attack with pace when they could.

However, the Oranje created very few clear chances over the 90 minutes and winger Tobin Heath spurned multiple opportunities to extend the USA's lead late on.

The Stars and Stripes became only the second nation to successfully defend a Women's World Cup title, after Germany did so in 2007.

But their outstanding squad of players have generated headlines off the field as well as on it during an absorbing 52-match tournament in France.

Rapinoe, who scored twice in their last-16 tie and did so again in the quarter-final, made front-page news during the tournament by saying she would reject a hypothetical invitation to the White House, for which she was criticised by US President Donald Trump.

Ellis's team were sometimes accused of being arrogant - and even branded disrespectful when striker Morgan celebrated her semi-final goal against England by pretending to sip a cup of tea - but their confidence has ultimately been fully justified by their impressive defence of their title.

Their 2-0 win in front of a capacity crowd of 57,900 at the Stade de Lyon saw them lift the title in Europe for the first time, after triumphs in China, on home soil and in Canada.

Scoring 26 goals over their seven matches in France, they set a new record for a single World Cup campaign, while 34-year-old Rapinoe became the oldest player to score in a final.

Her penalty took her narrowly above team-mate Morgan and England's Ellen White to win the Golden Boot award.

That came after Van Veenendaal had kept the USA at bay in a frenetic spell towards the end of the first half, first saving from Julie Ertz's powerful strike - the final's first shot on target after 28 minutes - before denying Samantha Mewis and keeping out two Morgan efforts, the first of which hit the post. 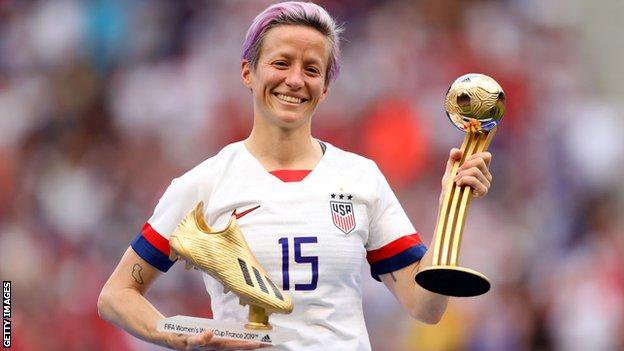 Repinoe was calmness personified taking the crucial penalty to send USA on their way to victory. She also won the Golden Ball, awarded to the best player of the tournament

"They put their hearts and souls into this journey, I cannot thank them enough. I could barely speak immediately after the game but I told them they had made history and to enjoy it."

USA co-captain Megan Rapinoe: "It's unbelievable just to know all of the people in our group have put in so much work. We have all our friends and family here, it is surreal."

The USA scored 26 goals at the 2019 Women's World Cup, the most by a team at a single tournament in the competition's history.

Rapinoe became the first player to score a penalty in a Women's World Cup final, as well as being the oldest scorer in a final (34 years and two days).

This was a 12th consecutive victory at the Women's World Cup for the USA - the longest run in World Cup history (men's and women's).

Netherlands goalkeeper Sari van Veenendaal made eight saves in this match - the most by a goalkeeper in a knockout stage match at the 2019 Women's World Cup.

Since failing against Australia in July 2017, the USA have scored in 45 consecutive matches in all competitions, netting 148 goals and scoring at least twice in each of their past 12 games.

Ronaldo Tests Positive For Coronavirus By Agencies 5 days, 20 hours ago 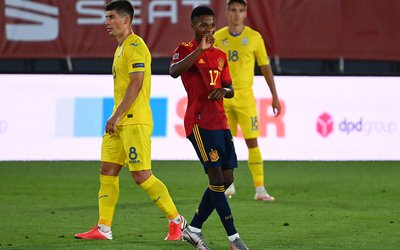