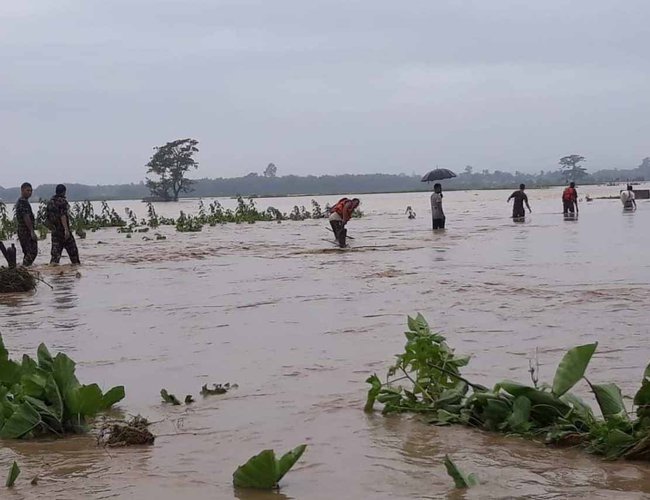 There will be generally to mostly cloudy throughout the country. Rain to occur at many places in the country, chances of heavy rainfall at a few places of the eastern and central regions and at one or two places of the western region. Monsoon rains have been lashing central and eastern parts of Nepal since the last two to three days. These rains have triggered some intense flooding in many districts. Many parts of Nepal have been reeling under flooding rains for the last many days now. Also, these have resulted in swelling of many rivers.

Places right from Jhapa, Birtangar, Saptari, Udayapur, Siraha, Janakpur, Rautahat, Sarlahi, Parsa, Banke and Bardia are experiencing flooding rains at present. According to Metrological Forecasting Division, no relief is expected from such conditions for at least next two to three days. In fact, flooding may worsen in some areas due to continuous heavy downpour.

According to the division, for the next 48 hours, Axis of Monsoon Trough is over Terai region of Nepal, it expects moderate to heavy with a few very heavy spells of rain and thundershower activities in many parts of Nepal. From Wednesday, rains will reduce in eastern and central terai district of Nepal, thus leading to a marginal relief from the flood-like situation.

Weather Forecast For April 2: Partly Cloudy In Hills And Fair In The Rest By NEW SPOTLIGHT ONLINE 1 day, 2 hours ago

Weather Forecast For April 1 Across Nepal By NEW SPOTLIGHT ONLINE 2 days, 3 hours ago