Narayani River Will Have Cruise Service By September

Narayani River Will Have Cruise Service By September 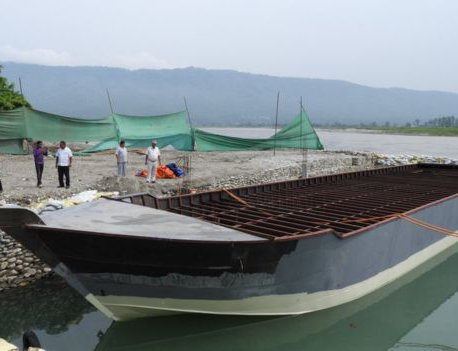 At a time when the debate is growing over commercial navigation in Nepalese rivers, a group of youth has started to construct a cruise ship to operate in Narayani River. Rhino Water Entertainment Private Ltd Chitwan has been constructing a ship at Kavreghat aiming to operate by September.

Rhino Water Entertainment Pvt Ltd informed that the boat capable of ferrying 200 tourists will start operation before Dashain. The operator said that the preparation for the cruise was on its last stage.

MD Kandel said that a port, and a boat measuring 100 feet in length and 25 feet is now under construction on the bank of Narayani in Kavreghat inside Gyaneshwor Community Forest of Bharatpur Metropolitan City-16.

According to Kandel, his company has an agreement with the community forest for a period of 20 years to operate the boat and port.

“The cruise will operate from Kavreghat to Golaghat in the west direction and Devghat to the north to let the tourists observe the religious areas of Devghat and rare animals in Golaghat,” says a report in BBC Nepali Service.