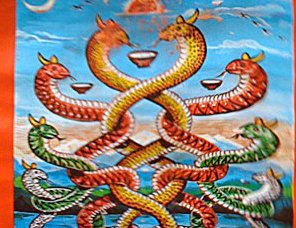 Hindu observed Nag Panchami across the Nepal by worshipping the snake deity today. They thronged holy sites, including the temples of snake deity, chanting mantras to mark the festival.

Nag Panchami is celebrated on the fifth day of the moonlit-fortnight in the month of Shrawan.

Nepali people worship snake gods, also called the Nagas during Nag Panchami. In the ancient time Nagas halted rain from pouring over Nepal. The king of that time also happened to be a Tantric and so he used his power to make Nagas let go of rain. The king succeeded in doing so but he also honored the majestic power of Nagas by turning the day of victory into a festive occasion of Nag Panchami.

On Nag Panchami, devotees put a picture of Naga high above their doorway and perform puja with necessary puja items. Offerings in the form of food are left in the yards and paddies for snakes. Naga temples in the valley at Nagpokhari, Taudaha and Nagdaha are thronged with devotees on this day.

As Hindus celebrate the forces of nature, Nagpanchami is also one of the most auspicious ceremonies that are celebrated annually. The significance of Nagpanchami is to pacify the active snakes and discourage them from being a threat to humans during the rainy seasons when the snakes venture out of their hiding places because of the rain and floods. On this day, cobras and other snakes are fed with milk and are worshipped by lighting up lamps, decorating temples byflowers and offering sacrifices and sweets.

Another legend behind Nagpanchami is that Lord Krishna had defeated the evil snake Kaliya who had attacked a child Krishna who was merely fetching his ball from the river waters.

After a few moments, Kaliya understood that the child was not ordinary and had begged for mercy and forgiveness. Lord Krishna had saved the villagers from the harassments and torments of the evil snake, Kaliya.

Holi Festival 2020 Under A Shadow Of Coronavirus By NEW SPOTLIGHT ONLINE 3 weeks, 2 days ago