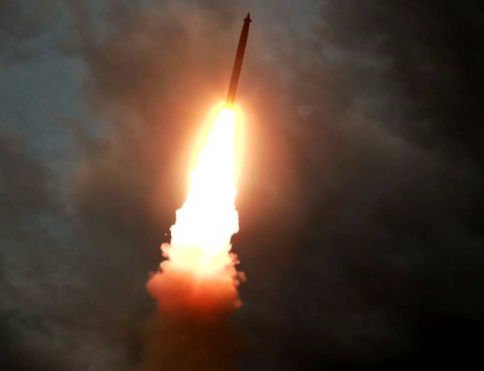 They were fired from South Hwanghae province across the peninsula into the sea to the east, a statement said.

The US said it was monitoring the situation and consulting with South Korea and Japan.

North Korea is widely believed to have missiles capable of striking long range targets, including potentially the US mainland.

It also claims to have developed a hydrogen bomb and to be able to mount it on a missile.

Despite the thaw with South Korea and the talks with the with the US, there is no indication Pyongyang has scaled down its military power.

Here's what you need to know about the North's missile and nuclear weapons programme and its military forces.

The Hwasong-12 was thought to be able to reach as far as 4,500km (2,800 miles), putting US military bases on the Pacific island of Guam well within striking distance.

Later, the Hwasong-14 demonstrated even greater potential with some studies suggesting it could travel as far as 10,000km if fired on a maximum trajectory.

This would have given Pyongyang its first truly intercontinental ballistic missile (ICBM), capable of reaching New York.

Eventually, the Hwasong-15 was tested, peaking at an estimated altitude of 4,500km - 10 times higher than the International Space Station.

If fired on a more conventional "flatter" trajectory, the missile could have a maximum range of some 13,000km, putting all of the continental US in range.

However, doubts remain as to whether these missiles could successfully carry and deliver a warhead for such a distance, and whether North Korea has the expertise to accurately hit a target.

The apparent successes of all these tests have raised questions as to how North Korea's missile program has improved so rapidly.

Observers believe Pyongyang may have acquired high-performance liquid-propellant engines from illicit networks in Russia and Ukraine.