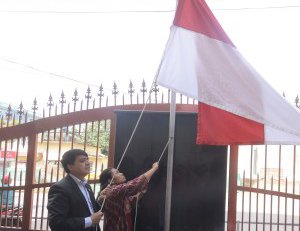 Honorary Consul of the Republic of Indonesia to Nepal and Chairman of IME Group Chandra Prasad Dhakal hoisted the national flag of Indonesia. The ceremony was attended by Indonesian nationals currently residing in Nepal along with the staff members of Consul’s Office and IME.

Indonesia is growing as a large market for the world and it is also the largest economy in ASEAN. Trade volume between Indonesia and Nepal is also very high as the latter is one of the largest trade partners of Nepal. Because both the countries are endowed with natural and cultural heritages, tourism in both the countries is considered a great business potential.

Nepal And Israel Inked Agreement To Provide Temporary Employments For Nepali Youths In Israel By Agencies 1 day, 16 hours ago