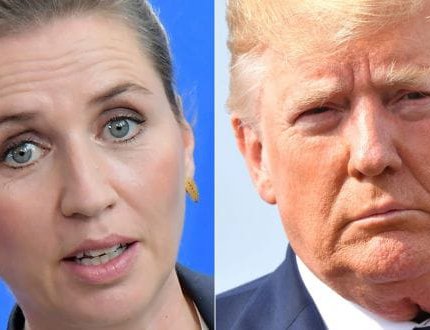 US President Donald Trump has called the Danish leader "nasty" after she rebuffed his idea of buying Greenland.

He lashed out hours after Prime Minister Mette Frederiksen said she was "sorry" that Mr Trump had abruptly called off a state visit to Denmark.

She has dismissed the suggestion of such a land deal as "absurd".

Queen Margrethe II invited Mr Trump to visit Denmark on 2 September, and the manner of his cancellation has stunned the Scandinavian nation.

What did the US president say?

"I thought that the prime minister's statement that it was absurd, that it was an absurd idea was nasty," he said.

"I thought it was an inappropriate statement. All she had to do is say no, we wouldn't be interested."

Mr Trump pointed out that US President Harry Truman once considered making an offer for Greenland, which is an autonomous Danish territory.

What did the Danish PM say?

Earlier on Wednesday, Ms Frederiksen reiterated that Greenland could not be bought.She told reporters the idea of selling the resource-rich Arctic island had "clearly been rejected" by its leader, Kim Kielsen, "a position I share of course".

Ms Frederiksen also said the American president's visit would have been an "opportunity to celebrate Denmark's close relationship to the US".

"This does not change the character of our good relations and we will continue our dialogue on how we can deal with challenges we are facing," she said, adding that the invitation to Mr Trump "remains open".

She has said Mr Trump's no-show was a matter of regret because "our preparations were well under way".

While praising Denmark as a "very special country", Mr Trump said in a tweet on Tuesday that his planned visit would no longer go ahead because Ms Frederiksen had "no interest in discussing the purchase of Greenland".

Mr Trump had earlier confirmed reports that he was interested in buying Greenland. When asked on Sunday if he would consider trading a US territory for the island, he replied: "Well, a lot of things could be done."

"Essentially it's a large real estate deal," he said.

On Monday, the US president tweeted a jokey image showing a tall golden skyscraper among the homes of a small village on the island.

The cancellation was described as a "farce" by the leader of the populist Danish People's Party, Kristian Thulesen Dahl.

"What is this man thinking of though? And with grounds that are worthy of an April Fools' joke," he tweeted.

As a Dane (and a conservative) it is very hard to believe. For no reason Trump assumes that (an autonomous) part of our country is for sale. Then insultingly cancels visit that everybody was preparing for.

A spokeswoman for the leftist Red-Green Alliance, Pernille Skipper, said: "Trump lives on another planet."

Pia Kjaersgaard, the populist former speaker of the Danish parliament, said it showed "rude behaviour to the Danish people and the Queen, who invited him."

Mr Trump has reportedly taken an interest in Greenland, in part, because of its resources, such as coal, zinc, copper and iron ore.

But while Greenland may be rich in minerals, it relies on Denmark for two-thirds of its budget revenue. It has high rates of suicide, alcoholism and unemployment.

The US has long seen the island, which sits along a direct route from Europe to North America, as being strategically important. It established the Thule air force and radar base there at the start of the Cold War, which now covers space surveillance and forms the northernmost part of the US ballistic missile early warning system.

Meanwhile, new Arctic sea routes are opening up as climate change is blamed for the accelerating thaw of ice in the region.