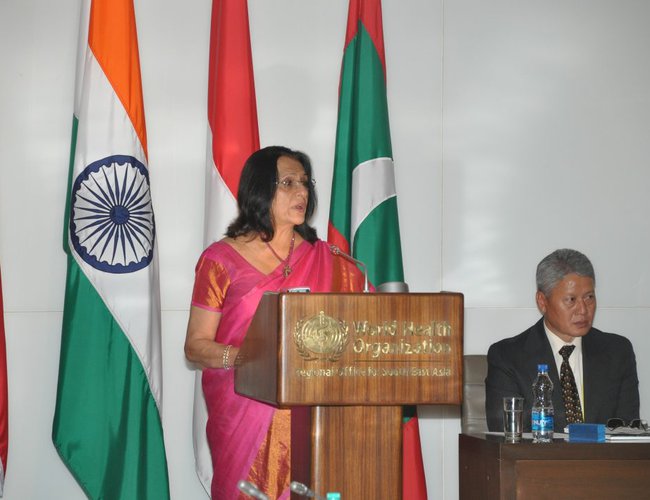 Health Ministers of member countries of WHO South-East Asia Region are meeting here next week to discuss ways of addressing health impact of climate change, the high burden of tuberculosis and strengthening capacities for emergency risk management.

Elimination of measles, a childhood killer disease; cervical cancer and other non-communicable diseases; and strengthening health services and workforce for universal health coverage are other key issues that will be taken up at the Seventy-Second Regional Committee Session of WHO South-East Asia from 2 September to 6 September 2019.

India’s Minister for Health and Family Welfare Dr Harsh Vardhan, Nepal’s Deputy Prime Minister and Health Minister, Upendra Yadav, and Regional Director, WHO South-East Asia, Dr Poonam Khetrapal Singh, will be addressing the inaugural session of the Regional Committee, the governing body of WHO in the Region. Health ministers and senior officials from all 11 Member countries and senior WHO officials will be attending the week-long deliberations.

This is the first Regional Committee Session after unanimous re-election of Dr Khetrapal Singh as Regional Director for a second five-year term.

Dr Khetrapal Singh, whose first term was marked by unprecedented public health achievements and progress in the Region, would be further firming up regional goals and targets along with Member countries for the next five years.

The Regional Director’s vision for the next five years is to sustain progress, accelerate efforts and innovate to achieve the targets of priority health programs.

Home to over one-fourth of the global population, WHO South-East Asia Region has made remarkable progress in several priority programs in the last five years. In 2014 the Region was certified polio-free. In 2015 Maldives and was certified malaria-free. Sri Lanka soon achieved the same. In 2016 the Region became the second WHO region to eliminate maternal and neonatal tetanus. In the same year Thailand became the first country in Asia – and the first globally with a large HIV epidemic – to eliminate mother-to-child transmission of HIV and syphilis. Maldives achieved the same in 2019.

All countries in the Region have multi-sectoral plans to address non-communicable diseases and are addressing antimicrobial resistance with ‘One Health’ approach.

In the Region’s pursuit of universal health coverage, access to safe, good-quality medicine is being enhanced through the South-East Asia Regulatory Network, which was launched in November 2016. Investments in strengthening capacities for emergency risk management have resulted in better management of major health emergencies such as Nepal earthquake, the recurring events of cyclone, floods etc.