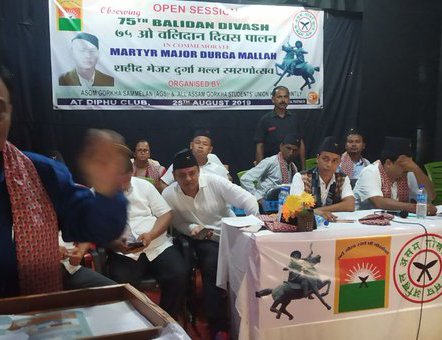 The Bharatiya Gorkha Parisangha (BGP) has claimed that more than 1 lakh people belonging to the community have been excluded from Assam’s final NRC. The list otherwise is believed to comprise mostly Bengali-speaking Hindus and Muslims.

State BGP president Nityananda Upadhyay said the figure was arrived at by speaking to members of local units of the organisation across the State.

The BGP is one of the stakeholders in the cases related to NRC in the Supreme Court.

“We are waiting for the data to reach us in two-three days. The number of rejected Gorkha people who are bona fide Indian citizens is expected to be more than 1 lakh as on date,” he said.

“The NRC has been based on the historic Assam Accord. It is time to realise that we have been identifying genuine Indian citizens based on documents, so inclusions have been done legally after multi-layered verification, but the numbers of foreigners traced after cases in the Foreigners’ Tribunals will not meet the expected lines that the government narrated. As a whole the NRC is not on expected lines,” Mr. Upadhyay said.

“The number of exclusions has come down from the draft NRC. Of the 1 lakh Gorkhas in the reject list, about 20,000 are facing D [doubtful] voters cases, while others have been hit by surname mismatch. The BGP will engage legal and para-legal community members trained to fight Foreigners’ Tribunal cases to help those excluded,” he added.

The BGP’s intervention had helped people with minor mismatch in names get included in the final NRC. But while Sahitya Akademi award winner and Assam Nepali Sahitya Sabha president Durga Khatiwada and his children have been included, founding member of the Assam Pradesh Congress Committee Chhabilal Upadhyay’s granddaughter Manju Devi has been left out along with her two children.

Former Tezpur MP, RP Sharma said Gorkhas living in Assam are indigenous people and no one from the community should be left out in the final NRC list.

The former MP claimed that claimed the Gorkhas have been living in Assam for ages.

Sharma said, “To see if anyone is left out during the NRC update process, a committee has been constituted by Asom Gorkha Sanmilan (AGS) and All Assam Gorkha Students’ Union (AAGSU).”

Source: The Hindu and other Indian newspapers