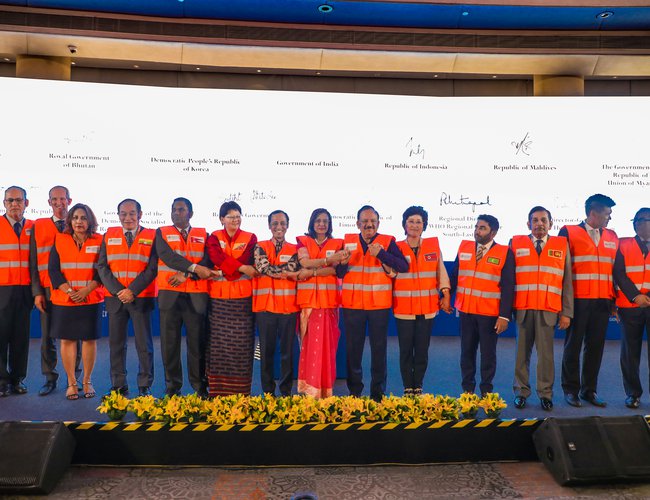 The WHO Director General, Dr Tedros Adhanom Ghebreyesus, who connected from Geneva to the Seventy-Second Session of WHO South-East Asia Regional Committee, said, “preparedness will save lives, and save money. The Delhi declaration on emergency preparedness is a vital step forward towards making the Region safer for all its people.”

Lastly, it emphasizes on interlinking sectors and networks – such as the ‘One Health’ approach to bridge the gap between diverse sectors including human, animal, environment – for prevention and control of emerging and remerging diseases.

Participating in the roundtable, Ministers of Health and heads of delegations of the 11 Member countries, that account for one-fourth of the global population, shared experiences from the numerous health emergencies that have hit the Region in the last over a decade. “We have a lot to share and learn from each other,” the Regional Director said.

The turning point was the Indian Ocean tsunami, that killed over 200,000 people, and caused massive destruction in six countries of the Region. The Region then set benchmarks for disaster preparedness and response and created the regional health emergency fund SEARHEF that has funded 39 emergencies in 9 countries, disbursing 6.07 million USD.

Despite improved capacities and responses to health emergencies, WHO South-East Asia continues to be one of the most vulnerable Regions at risk of emerging and re-emerging diseases, diseases associated with climate change and rapid and unplanned urbanization, and natural disasters such as floods, cyclones, earthquakes and volcano eruptions.

Since 2014, the start of the first term of the Regional Director, scaling up emergency risk capacities has been a Regional flagship priority. In her second term that began in 2019 February, the Regional Director has asked for sustain efforts to strengthen emergency preparedness and response; accelerate investments to address critical gaps at national and sub-national levels; and innovate to continuously improve preparedness and response system.

Nepal To Administer Second Dose Of Vaccine After 8 Weeks By Agencies 22 hours, 19 minutes ago