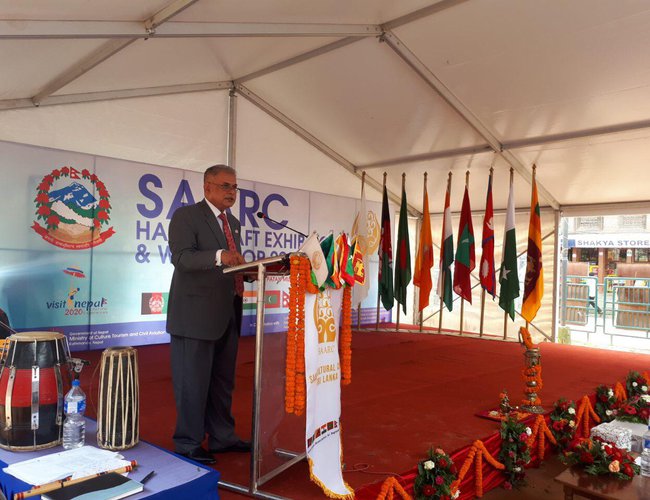 “Traditional and modern handicrafts are still alive in the SAARC region, which continues to remind us that we are the proud owners of a rich culture,” H. E. Mr. Amjad Hussain B. Sial, Secretary General of the South Asian Association for Regional Cooperation (SAARC) said.

He made these remarks, while addressing the Inaugural Ceremony of the SAARC Handicraft Exhibition & Workshop in Patan, Lalitpur, Nepal, this morning.

In his Address, the Secretary General said that South Asia, while reflecting a rich and plurality of cultural values and traditions, had shared civilization, constituting a historical basis for sustaining harmonious relations among the peoples of the region. He said, “The emergence of SAARC, therefore, contributes to further strengthening of cordial and fraternal ties among the Member States.”

He said that in recognition of the fact that the SAARC process could draw more deeply from the vitality and strength of South Asia's cultural heritage, the leaders had identified the promotion of cultural cooperation and development in the region as one of the Charter objectives of SAARC. He said, “In pursuance of this objective, during their Fourteenth SAARC Summit in New Delhi in April 2007, our leaders adopted the SAARC Agenda for Culture, which identifies several facets for collaboration in preserving and promoting the rich cultural heritage of our region.”

In this context, he acknowledged the role being played by the SAARC Cultural Centre as a Centre of Excellence in efficiently and successfully implementing the SAARC Agenda for Culture.

The SAARC Handicraft Exhibition and Workshop was organized jointly by the Ministry of Culture, Tourism and Civil Aviation of Nepal and the SAARC Cultural Centre based in Colombo. It brought together artisans from across the region to showcase their handicrafts under one roof, and to share their knowledge and skills among themselves as well as visitors.

The Exhibition was inaugurated by Minister of Culture, Tourism & Civil Aviation of Nepal in the historic city of Patan in Lalitpur. It will conclude on 12 September 2019.