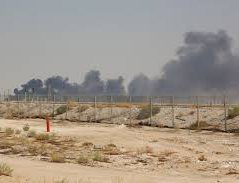 Oil prices surged more than 15 per cent at the open on Sunday on worries over global supply and soaring tensions in the Middle East. State oil giant Saudi Aramco said a drone attack on Saturday had cut output by 5.7 million barrels per day.

Aramco gave no timeline for output resumption. A source close to the matter told Reuters the return to full oil capacity could take "weeks, not days."

U.S. President Donald Trump said on Sunday that the United States was "locked and loaded" for a potential response to the attack on Saudi Arabia's oil facilities, after a senior official in his administration said Iran was to blame.

He said he had also authorized the use of the U.S. emergency oil stockpile to ensure stable supplies after the attack, which shut down 5 per cent of world production.

Late Saturday, U.S. Secretary of State Mike Pompeo took to Twitter to directly blame Iran for the attack, without offering evidence to support his claim.

"Amid all the calls for de-escalation, Iran has now launched an unprecedented attack on the world's energy supply," Pompeo wrote. "There is no evidence the attacks came from Yemen."

Traders and analysts said crude may spike to as high as $100 (all prices in US dollars) a barrel if Riyadh fails to quickly bring back supply.

Another source briefed on the developments said Saudi oil exports would continue to run as normal this week thanks to large storage in the kingdom, the world's top oil exporter. It ships more than 7 million barrels daily to global destinations.

It was last at $60.89 a barrel while Brent crude was up 13 per cent at $68.06 after earlier rising to $71.95. In addition to massive supply disruptions, the attacks also heightened investor worries about the geopolitical situation in the region and worsening relations between Iran and the United States. Those concerns powered safe-haven assets with prices for gold climbing 1 per cent in early Asian trade to $1,503.09.

Riyadh said it would compensate for the damage at its facilities by drawing on its stocks, which stood at 188 million barrels in June, according to official data.

The Saudi bourse closed down 1.1 per cent on Sunday, with banking and petrochemical shares taking the biggest hit. Saudi petrochemical firms announced a significant reduction in feedstock supplies.

"Abqaiq is the nerve centre of the Saudi energy system. Even if exports resume in the next 24 to 48 hours, the image of invulnerability has been altered," Helima Croft, global head of commodity strategy at RBC Capital Markets, told Reuters.

Kuwait, which borders Iraq, said it was investigating the sighting of a drone over its territory and co-ordinating with Saudi Arabia and other countries. The Cabinet said the prime minister ordered tighter security at vital installations.

Regional tensions have escalated since Washington quit an international nuclear deal and extended sanctions on Iran.

UN Secretary-General Antonio Guterres condemned Saturday's attacks and called on all parties to exercise restraint and prevent any escalation.

The European Union warned that the strikes posed a real threat to regional security, Britain called them a "reckless attempt" to disrupt global oil supplies and France said such actions could only worsen the "risk of conflict." Iran's ally Turkey called for the avoidance of "provocative steps."