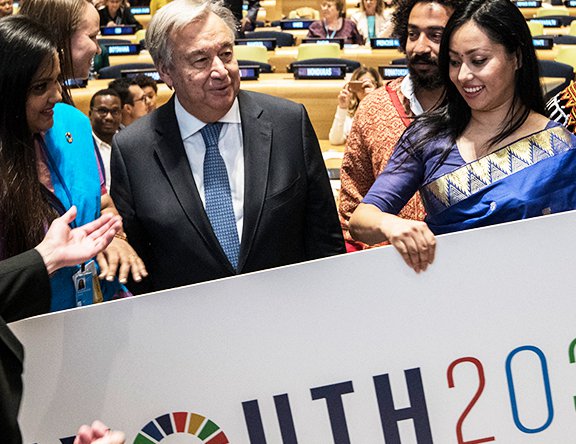 New York, 21 September—A day after thousands of young people marched and rallied for urgent climate action, young leaders brought their message to the United Nations for the Youth Climate Summit, the opening salvo of the three day long United Nations Climate Action Summit, which will culminate on Monday, 23 September.

The Youth Climate Summit—the first time the UN has convened a summit for young people completely devoted to climate action — aimed to give voice to the demands of young people to take far swifter action to reduce the emissions that, without action, are on track to reverse the development gains of the recent decades that have improved the lives of millions of people.

The Summit opened a dialogue between youth and decision makers, putting young people in the driving seat with voice and agency to realize their potential and the change they are persisting towards climate action.

Hosted by United Nations Secretary-General António Guterres, the Youth Climate Action Summit brought youth climate champions together from more than 140 countries and territories to a platform to share their solutions on the global stage, and deliver a clear message to world leaders: we need to act now to address climate change. The outcomes of the Youth Climate Summit will feed into the Climate Action Summit, which will be attended by heads of state and government as well as business CEOs and civil society leaders.

Mr. Guterres, calling this generation of young people “essential” in combating the climate crisis, said today’s gathering was a critical milestone ahead of Monday’s Climate Action Summit, where he has asked world leaders to come with bold, concrete plans. He credited youth for shaking up leaders’ “laissez-faire” approach to climate change.

“We are not yet there,” Guterres said, adding that we are “still losing the race” against climate change. “But there is a change in momentum. Largely this change in momentum was due to your [Greta Thunberg’s] initiative, and to the courage with which you have started this movement.”

“I have granddaughters. I want them to live in a livable planet. My generation has a huge responsibility. It is your generation that must hold us accountable to make sure we don’t betray the future of humankind.”

The Youth Climate Summit featured a full-day of programs that brought together young activists, innovators, entrepreneurs, and change makers committed to combating climate change at the pace and scale needed to meet the climate challenge.

The program culminated in unveiling the State of Youth Platform and the ActNow platform that encourages people to take action on climate action. To close the Summit, the United Nations Deputy Secretary-General Amina Mohammed took part in a Town Hall with the participants and high-level representatives from Governments and civil society. 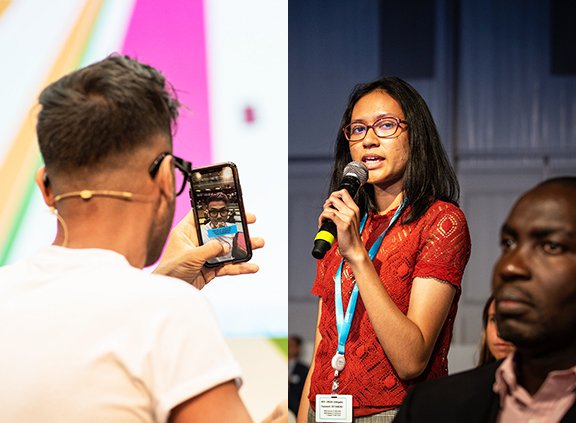 Jayathma Wickramanayake, the United Nations Secretary-General’s Envoy on Youth, said “Climate change is the defining issue of our time. Millions of young people all over the world are already being affected by it. If we don’t act now, the impact will be severe.”

Global emissions are increasing, temperatures are rising and the impacts of climate change are growing. Climate change is already affecting the lives of all people, but for the 1.8 billion young people between the ages of 10 and 24 years, the issue is felt with far more urgency as it will shape their lives in ways never witnessed before. For the younger generation, the need for urgent climate action has never been clearer.

According to the World Meteorological Organization, the world is now experiencing the warmest five-year period on record. The average global temperature for 2015–2019 is on track to be the warmest of any equivalent period on record and is currently estimated to be 1.1°Celsius above pre-industrial times. Widespread and long-lasting heatwaves, record-breaking fires and other devastating events such as tropical cyclones, floods and drought have had major impacts on socio-economic development and the environment.

Sea ice and ice mass continue to decrease, sea-level rise is accelerating, and sea water is becoming more acid. Food insecurity and health impacts are growing. But the world is continuing to invest in fossil fuels.

Jayathma Wickramanayake emphasized that climate action must be fair and just. “We have to ensure that no one, especially young people, is left behind.” The 2030 Agenda and the Sustainable Development Goals (SDGs), she said, are a blueprint for the world to achieve sustainable development by 2030. Climate action (SDG 13) is crucial to achieve this.