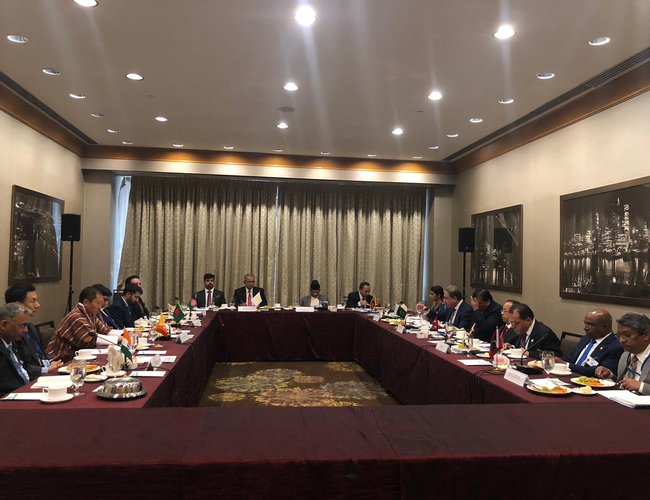 Foreign Minister Pradeep Kumar Gyawali hosted and also chaired the Informal Meeting of the SAARC Council of Ministers which was attended by Foreign/External Affairs Ministers as well as other delegates of the SAARC Member States.

While highlighting the potentials and prospects of the South Asian region, the Minister expressed the view that effective cooperation at the regional level will help utilize the strengths of the region for changing the socio-economic landscape.

He also said that robust cooperation is required for addressing various challenges facing the region, such as poverty, inequality, underdevelopment, climate change, natural disasters, etc. During the meeting, the Foreign/External Affairs Ministers reviewed the progress made by SAARC in the past one year and stressed the importance of regional cooperation for enhanced trade, investment, connectivity, tourism and culture as well as security, peace and stability.

Nepali delegation to the 74th session of the United Nations General Assembly engaged in a number of important events and bilateral meetings in New York. The Debate will continue through 30 September 2019 and the Hon. Foreign Minister of Nepal will make an address in the evening tomorrow.

Nepali delegation also participated in the first High-level Meeting of the General Assembly on Financing for Development convened here to review the implementation of the Addis Ababa Action Agenda. Many Heads of State/Government as well as business leaders shared their perspectives on aligning and mobilizing resources for financing SDGs. Many speakers also said that meeting the financing gap was daunting task and more partnerships were critical.

Pradeep Gyawali attended the Ministerial Meeting of the Non-Aligned Movement. In his statement, the Minister reaffirmed Nepal’s commitments to the purposes and principles of NAM. He underscored that cooperation and coexistence are critical for a constructive world order which can only be achieved if the principles of sovereignty and political independence are upheld in good faith by all. 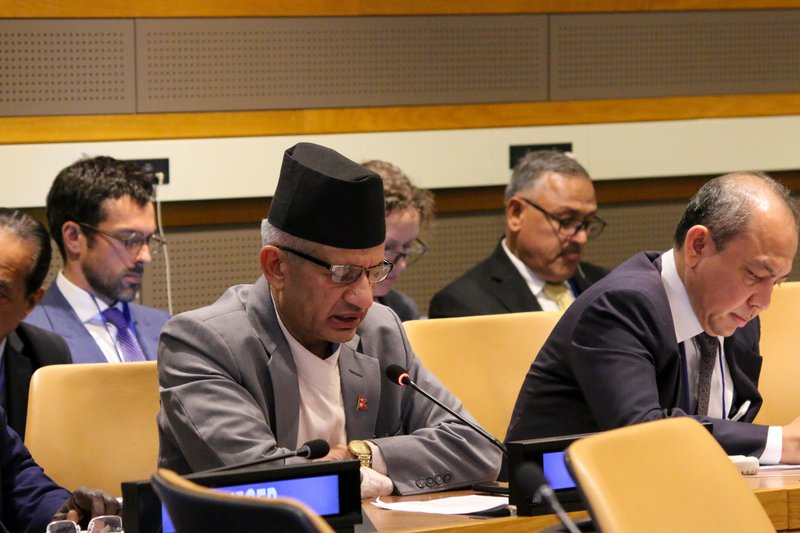 The Minister also attended the annual Ministerial Meeting of the United Nations Group of Friends of Mediation under the theme‘New Technologies for Peace and Mediation as Tools for Inclusion: Celebrating the 10th Ministerial Meeting and Looking Ahead’ and shared Nepal’s perspectiveon the role of new technologies in mediation. The Hon. Minister elaborated that mediators should be equipped with the best tools available for averting violent conflicts. He also added that the ever-evolving technology can certainly provide them with innovative solutions.

Gyawali addressed the High-level Meeting on the International Day for the Total Elimination of Nuclear Weapons convened by the President of General Assembly in New York. The Minister underlined the belief that total elimination of the existing nuclear weapons and the assurance that they will never be produced again are the only absolute guarantee against their catastrophic consequences.

The Foreign Minister addressed the annual Ministerial Meeting of the Least Developed Countries (LDCs) and focused on various structural and other barriers facing the development path of these countries. He added that the international community should come forward to assist LDCs through ensuring market access, removing tariffs and non-tariff barriers, lifting quantitative restrictions and helping capacity building and technology transfer.

Minister had a bilateral meeting with Helen McEntee, Irish Minister of State for European Affairs. The two sides discussed various matters of bilateral and multilateral cooperation.

Shakti Bahadur Basnet, Minister for Forests and Environment, attended a high-level side-event organized by the newly established Group of Friends of Mountainous Countries of which Nepal is an active member. Hon. Basnet underlined the urgency of taking collective actions for achieving sustainable mountain development and protecting mountain ecosystems for the good of mountain people as well those billions living downstream. The Group, which has currently 20 members, is established to promote interests of mountain countries in various UN processes.

Election Commission Rules Not To Recognize NCP Split By Agencies 1 hour, 30 minutes ago