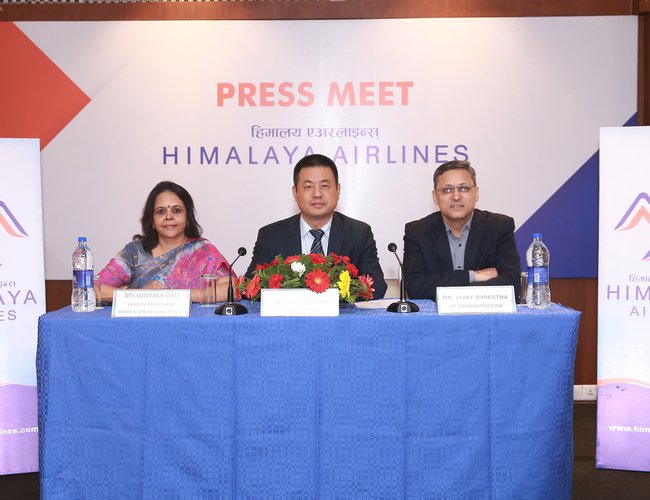 Talking to media persons after a press conference organized to launched its new brand identity, s Vice President (Administration) Vijaya Shrestha told the journalists about their preparations for both the proposed flights.

Himalaya Airlines remakes its brand identity with a new logo sporting a soaring eagle amidst the Himalayan peaks. This remaking is founded on Himalaya’s key guiding principles of Safety, Performance, Customer Service, Winning Spirit, and Proper Practice as well as its ongoing efforts to expand its network in the Asian region. During a press meet held at Hotel Royal Singi on September 29, 2019, the airlines, an international air carrier of Nepal, launched its new Corporate Logo.

The new corporate logo comes after a well-thought out strategic planning. Since its establishment in 2014, Himalaya Airlines has been thriving to excel in all aspects of the business. Having started with one aircraft and one destination, the airlines has progressively moved its way to three A320 and five destinations in a span of three years.

The Airlines has strong presence in the Middle East connecting to Abu Dhabi, Dammam and Doha. It launched Kathmandu-Dhaka flights just two months ago, on 22 July 2019 and is intent to consolidate its operation on this route. As a part of the evolution process, it is now changing its corporate logo to a brand new design symbolizing its strength, harmony and peace. The new logo was unveiled by Himalaya Airlines’ President, Zhou Enyong and Vice President - Administration, Mr. Vijay Shrestha in the press meet. The airlines revealed its new logo for which interpretation along with a brief on the airlines’ journey was presented by Mrs. Ujjwala Dali – Head of Brand and Service Department.

Vijay Shrestha, Vice President - Administration, in his welcome speech, shared “Over the past five years, we’ve built a reputation for safety and reliability. The idea of the brand refresh emerged through some significant changes within the company, leading to evolve our existing logo giving us a new face. After careful consideration, we have decided to adopt the new logo as an appropriate strategic move for us. While we wanted to accurately reflect our core fundamentals in the new logo, we also wanted to express our strong determination to continuously move forward.”

Zhou Enyong, the President of Himalaya Airlines while unveiling the new logo, remarked “We have worked tirelessly to bring new changes and meaningful improvements in the organization to provide the best services to our passengers. We have been continuously giving our best efforts to establish Himalaya Airlines as a leading airline not only in Nepal but also in Asia. As a result of our relentless efforts, we shall soon be adding Lhasa, Beijing and other prominent cities of China to our ever evolving network. We would continue to move forward with the winning spirit to take Himalaya Airlines to greater heights”

Himalaya Airlines with its new face is all set to follow a new strategic path to expand further and achieve new heights. With the plans to add two A319 in its fleet in the near future, Himalaya Airlines is ready to serve more and diverse passengers in the coming days.

Himalaya Airlines' new logo depicts the soaring eagle, through the composition of three ‘A’s in “Himalaya”. This bird that inhabits in the Himalaya ranges is regarded as a symbol of perseverance and courage and indicates flying higher to reach the skies. The logo outlines the Himalayan peaks, signifying the name and position of Himalaya Airlines. The combination of blue, white and orange colors represents the “harmonious unity”. The blue color represents the sky, which means noble, elegant and trustworthy; white represents snowy mountains, meaning holy peace, fairness and integrity; orange represents the people and productivity which means auspicious, active and progressive; the combination thus truly reflecting the corporate values of Himalaya Airlines.

Himalaya Airlines, an international air carrier is a Nepal – China joint Venture established in August 2014. As the name ‘Himalaya’ symbolizes high mountains of Nepal, dedicated in service to uplift the name of the nation, Himalaya Airlines aspires to rise up in its name to international standards. With the aim to excel in safety, on time performance (OTP) and most primarily, in service to its customers, H9 has already established itself in Nepal with high recognition.

Starting with one aircraft and one destination the airlines quickly moved its way to three aircraft and 5 destinations in a short span. The airlines took off to its first destination: Doha - Qatar on May 31, 2016 and further expanded its network to other countries of Asia, the latest destinations being Abu Dhabi-UAE and Dhaka–Bangladesh in the year 2019.H9 network currently includes: Abu Dhabi, Dammam, Doha, Dhaka & Kuala Lumpur. Himalaya Airlines is the first and the only airline connecting Nepal to the Kingdom of Saudi Arabia with its historical connectivity to Dammam.

Presently, Himalaya Airlines proudly owns the young fleet of three A320-214 series of narrow-body aircraft with the configuration of 8 Premium Economy class & 150 Economy class seats and has plans to add two A319 in its fleet in the near future to fly Trans-Himalayan ranges and launch flights to Lhasa. The airlines is now focusing to build its connectivity with China; initiating its first flight to Beijing, the airlines will be spreading its wings to Changsha, Nanchang, Guiyang, Chongqing, Ali & Shenzhen.

In its first year of commercial operations, H9 received the international award for “Leading New International Airlines in South Asia”at South Asian Travel Awards (SATA) 2017. This award honors the efforts undertaken towards developing high standard of services and expanding network and has given a tremendous boost to H9 family to excel further and rise higher in the aviation sector. Our team of professionals comes from a multicultural and diverse background and is dedicated to deliver highest quality of customer service with a sense of genuine Nepalese hospitality to its esteemed passengers, following the age-old tradition of “Atithi Devo Bhava” – Guest is God.

On this festive occasion of celebrating Dashain festival and the 70th anniversary of the founding of new China, we are holding this press meeting for unveiling the new logo of Himalaya Airlines, to present our wishes and blessings to both festivals!

I would like to thank all of you for your long support to the publicity and promotion for Himalaya Airlines. On behalf of H9, I would like to extend my warm welcome to all of you and express my heartfelt gratitude to all sectors of the community who have given great support to H9’s development.

Himalaya Airlines is an emerging international airlines in the aviation market. Established in 2014, it is now transitioning to the new stage of the business with Tibet Civil Aviation Development & Investment Co. Ltd. and Yeti World Investment Pvt. Ltd. going to be its new shareholders. Under the new structure, H9 is going to play better and more important role in connecting Nepal to China and other Asian countries and beyond. We shall be more committed to the enhancement of the connectivity efficiency between Nepal and other countries to facilitate people exchanges, trade flows and business corporations, etc.

There are in total 320 staffs in the company, including 283 Nepalese, 20 Chinese and 17 other nationalities. Since the launching of our flight operation in May 2016, we have operated 2,513 flights, transporting around 657,000 passengers in grand total. We are generating more than $3million tax revenues for the government every year in average, and more than $4million ticket tax revenue, accumulating to around $20million taxes incomes over the past three years of operation. 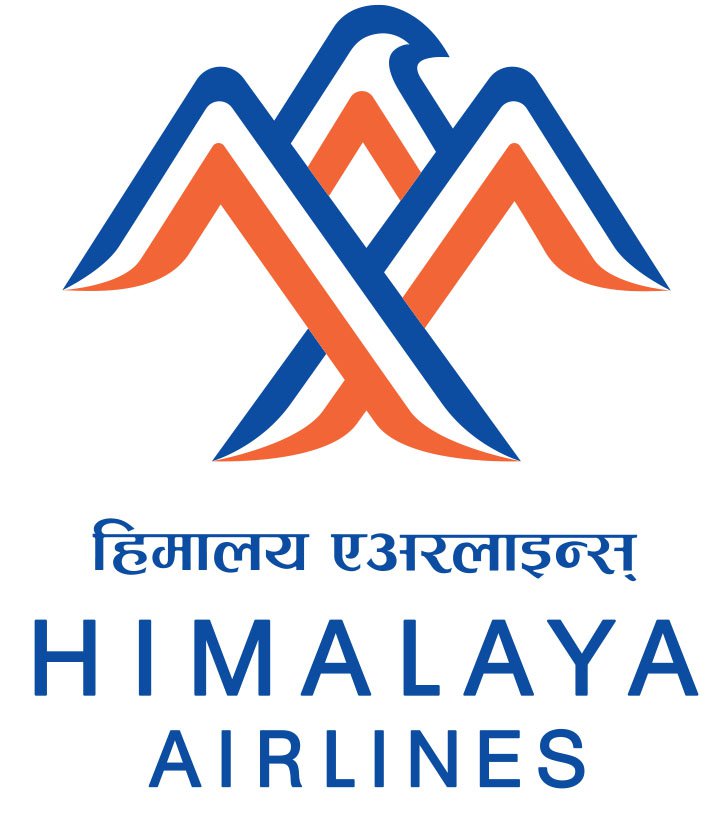 During the past long period of time, we have worked tirelessly to bring new changes and meaningful improvements in the organization through the adjustments of our business model and strategies. Under the guidance of the blueprint, it is required to endow the corporate culture new contents and the brand identity a new face. Therefore, the new brand logo has been evolved as the starting point of our transformation. As the courageous and persistent spirits being possessed by the soaring eagle, the company’s shared value of winning spirit is exactly reflected in the logo.

It is as a result of this winning spirit, that we shall soon be adding Beijing, Lhasa, Nanchang, Guiyang, Changsha and other cities of China to our ever evolving network. The Beijing direct flight from Kathmandu especially, will mark the first ever capital-to-capital direct flight between Nepal and China, giving great significances to the bilateral exchanges and corporation of the two countries. With our visions of the new Chinese sectors being open soon, I believe Himalaya Airlines could make greater contributions to the Visit Year 2020 initiative by bringing more load of tourists to Nepal and inject new energy and vitality to all sectors of the economy.

In the future, we would continue to move forward with relentless efforts to take Himalaya Airlines to greater heights and further distances, and be committed to provide unique customer service with a sense of genuine Nepalese hospitality to our esteemed passengers.

Zhou Enyong is the president of Himalaya Airlines