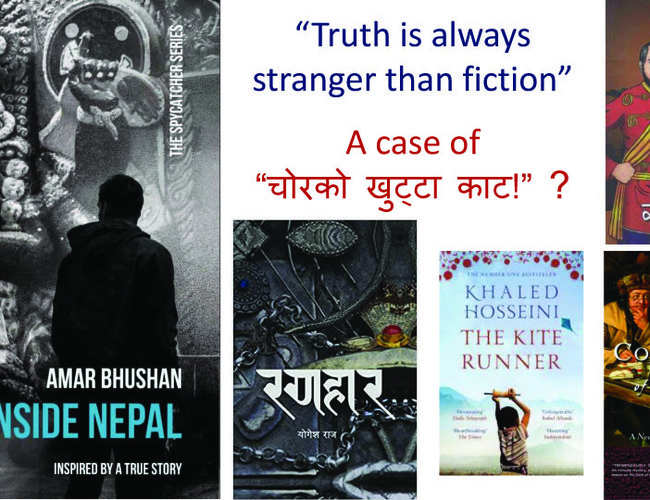 Not since Diamond Sumshere's Seto Bagh (1973) has Kathmandu's political cognoscenti world been as roiled as by the recent book Inside Nepal written by Mughlani spook boss turned novelist Amar Bhushan. That a novel should shake the political world's foundations is itself strange and points to the latter's inherent structural weaknesses: maybe the fortress is a house of cards, and perhaps the strutting emperors have no clothes!? Given that the current "communist" regime has started taxing books and bringing normal imports of reading material to Nepal to a standstill, the book is being couriered and sold at high price. Why this interest, and what raw nerves has it hit?

There is a Nepali saying that is perhaps apt and captures the overall mood: chor ko khutta kaat! This comes from a story of a king who knew one of his servants was stealing something but unable to pinpoint who. He had them all lined up and putting their right foot forward. Then he had the axmen brought out with axes raised, ready to strike and thundered: "Cut off the feet of the thief!" While the axmen and most of the servants were simply mystified, the real thief instinctively withdrew his leg and was easily apprehended. What Amar Bhushan's book has done is punctured the comfortable but fake narrative that the 2005/06 so-called "peoples' movement" was a wholly home-grown Nepali national movement. And the ruling Loktantrick political elite that peddled that narrative know it was not so, but were comfortable in the illusion that they had managed to fool all the people all this while. The book came as a rude shock and hence the instinctive reaction.

The apologists for this kleptocracy try to dismiss the book by saying it is clearly a work of fiction and what it says must be ignored. What they forget is the previously exposed factual background it is based on, the person who has written it, and why something so sensitive (one might even say libelous) has been brought out at this stage, obviously following some serious vetting by official spookdom. The issue is Mughlani role in Nepal's regime change and how Nepal's new political masters come out as mere pawns in this Great Game. Amar Bhushan's novel is certainly not a historical documentation but one that recalls for a reader a flood of such past documentations; and this is its merit as a work of art.

British philosopher turned novelist Iris Murdoch, speaking to Bryan Magee in a popular BBC series Men of Ideas, recalls the difference between philosophy and literature: philosophy (like pedantic history writing) aims to clarify a problem while literature (like all good art reaching beneath the surface) moves beyond analysis to a broader synthesis that mystifies with awe. Some truly great novels have been written in the past that manage this art form with distinction. Recall Khaled Hosseini's Kite Runner based on Taliban's takeover of Afghanistan or David Liss's Conspiracy of Paper. Liss was a PhD student studying the early history of capitalism when, frustrated with the mass of detail he was swamped with, decided to write a novel that captures the picture of a world before paper currency and before the advent of a civilian police force to enforce the law of contracts that we are so used to today.

Fiction? Yes, but based on the background of solid facts. And the need for experts in narrow disciplines to come out and express their qualms and frustrations in an art form of a novel has been attempted by other Nepali experts as well, notably heart surgeon Raamesh Koirala with his Kopila Ashram that captures the racket of child adoption and trafficking in Nepal, and also historian Yogesh Raj with his Ranahar, based around the doings in the court of the genteel but ineffective last Malla king of Bhaktapur. As Raj expressed it in his laureate lecture when receiving the prestigious Madan Puraskar, a historian writing a novel is making an attempt to give form and shape to places today empty of archaeological details but very much brimming with life in ages past.

But let us first look at the well-exposed facts on which the novel is based. Mughlanis have disliked Nepal's independence and have always struggled to bring it to the level of Bhutan, Sikkim or even Kashmir. Sunanda K. Dutta-Ray's Smash and Grab: Annexation of Sikkim (1984) and an extension of that policy to Nepal recounted by another spook R.K. Yadav in his book Mission R&AW (2014) is a policy thread running from Vallabhai Patel to Indira and Rajiv Gandhi all the way to Man Mohan Singh and Narendra Modi. Jawaharlal Nehru University academic and diplomat S.D Muni recounts in footnoted detail the central Mughlani role in the 2005/06 regime change fore-fronting the Maoists and sidelining the King in his chapter in the book Nepal in Transition (see: https://archive.nepalitimes.com/news.php?id=19722#.XYq5e0YzbIU ). The blockades of Nepal in 1989 (around which Amar Bhushan's book is based, albeit with admixtures of 2005) and in 2015 are brutal reminders of this geo-political reality, syrupy political statements notwithstanding.

Amar Bhushan himself was the boss of the Mughlani spook agency RAW (special secretary) where he worked for a quarter of a century until retirement in 2005 and under whose watch RAW suffered ignominy with the flight of its agent Rabinder Singh in 2004 to US (suspected via Nepal) before he could be nabbed as a double agent. As recounted by him in an interview to Outlook India in 2012, he wrote his first spy novel Escape to Nowhere to help in his and RAW's reputational rehab ("to set the record straight") following that intelligence debacle. It took eighteen months for that novel to be dry-cleaned and vetted officially by RAW so as not to compromise their sources and violate the official secrets act. One must assume a similar process must have preceded the publication of Inside Nepal. This is especially important given that Bhushan must have been a key figure handling Nepal from the 1989 blockade (which is the subject of his novel) right through to getting Prachanda and Baburam to write that notorious surrender letter to the Vajpayee government pledging to uphold Indian interests which also led to the 12-point Delhi deal. 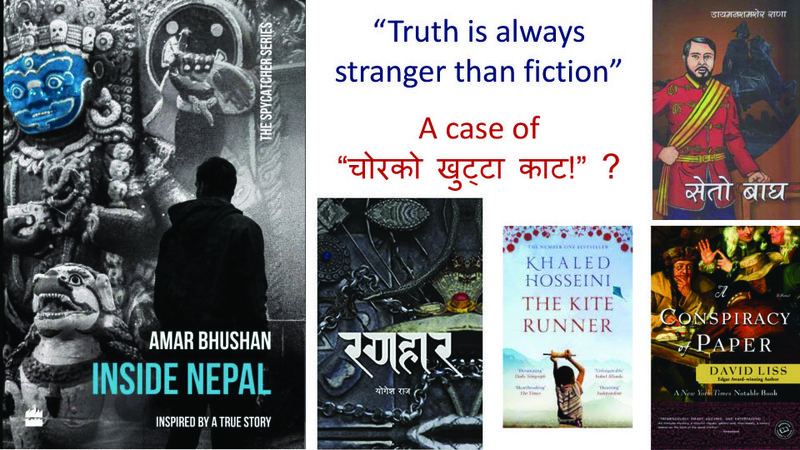 On the whole, the book is not as riveting as John le Carre or Ian Fleming given that a significant portion of it is about the inefficiencies within RAW bureaucracy and how "cowboy" operatives were still able to do a James Bond. It mixes up events as novels are free to do, for instance talking Maoists into inciting violence against the king: in 1989/90 there was no Maoist uprising and if indeed they were thus incited, it must have been the shabbily underground "Gorakhpuri" communists that were the mother-bed from which Prachanda-Baburam split in the mid-1990s to start the Maoist insurgency. Moreover, India was not mad at the king for importing Chinese arms and "not extending the 1950 Indo-Nepal Peace and Friendship Treaty", which does not need extending. India was mad because of Chinese arms import as well as King Birendra's Zone of Peace proposal supported by 115 countries but not India, which therefore let lapse the trade and transit treaty to impose the blockade.

The value of the book for Nepalis lies in the thinly disguised characters one can map onto real people and events as one reads it. For instance, the Nepali Kangress leader Govinda and his cousin contacted in Jogbani and fed RAW funds could only be Girija Koirala and either his Sancho Panza Sushil Koirala or Chakra Bastola. The RAW funded Nepali newspaper can fit any number of candidates from 1989 to 2006, the sahujis who owned major weeklies and broadsheets. The powerful UP smuggler who ended up collaborating with RAW during the blockade and later ended up becoming a minister can fit a range of UP and Bihar politicians together with their Nepali political as well as security contacts.

What is worrying about this book is not only the artistic portrait of Nepali Quislings but the indication that Mughlani Deep State is set on flexing its muscular diplomacy, the first step being the glorification of its spooks. As Bollywood often mimics Hollywood with movies like Salt and Bourne series, this book, with a movie in making, comes across as Mughlan giving up on moral and developmental persuasion and opting for covert coercion. It does not bode well, either for democracy in Nepal and India or for a peaceful neighbourhood, more so given that Nepal's ruling communists have decided to overtly tie their ideology with China's Xi. May Pashupati Nath protect us all.

Nepal And The EU Share 20 Years History Of Partnership On Education By Jutta Urpilainen 10 hours, 4 minutes ago

Be Works By Hemang Dixit 11 hours, 5 minutes ago