DASHAIN FESTIVAL Festival Of All

As Nepal's festival season is at its last phase of the year, Nepalese are waiting to celebrate Navratri Festival, which is known as Dashain festival. At a time when traditional practices are waning all over, Kathmandu Valley still retains the ancient version of Hindu Practices 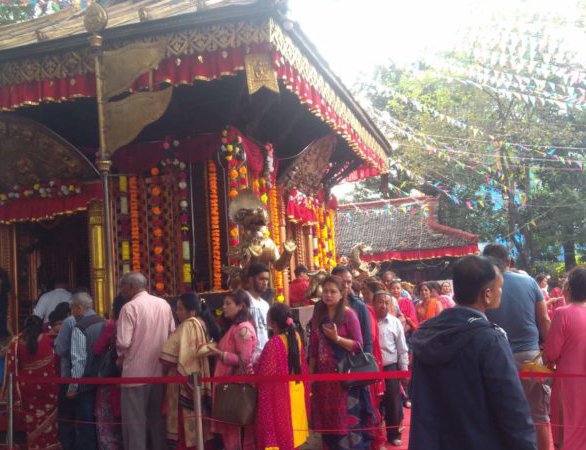 Although different places have different ways to celebrate Dashain or Navaratri, Nepal has its own way. Kathmandu Valley and Newar settlements around the country still keep the traditional practices of thousand years ago going. This is unique in the sense that they still practice the tradition of worshiping the Shaktipith following the rituals.

Unlike the rest of Nepal, Kathmandu Valley's Dashain festival has unique characters, which does not exist in many parts of this region. Dashain is a period of climax to worship Shaktipith.

However, Dashain is gradually getting national characters. All the communities celebrate the festival as a symbol of harmony. This is taken as a time for family reunion in other parts.

Many traits of Dashain festival are also practiced in Nepal's southern plains or Madhesh, where many important Shaktipiths still exist. The celebrations there for the Dashain happen in a different way.

Dashain starts from the start of Navaratri. The first day of Navaratri begins with worshiping and planting Jamara at people's houses.

The first day of Dashain is called Ghatasthapana, which literally means installing a pot. On this day the kalash, a holy water vessel, symbolizing goddess Durga, often with her image embossed on the side, is placed in the prayer room. The kalash is filled with holy water and covered with cow dung on to which seeds are sown. A small rectangular sand block is made and the kalash is put in the centre. The surrounding bed of sand is also seeded with grains. The ghatasthapana ritual is performed at a certain auspicious moment determined by the astrologers. At that particular moment the priest intones a welcome, requesting goddess Durga to bless the vessel with her presence.

By the tenth day, the seed will have grown to five or six inches long yellow grass. The sacred yellow grass is called 'Jamara'. It is bestowed by the elders atop the heads of those younger to them during the last five days when tika is put on. The jamara is taken as a token of Goddess Durga as well as the elders blessing.

The ninth day is called Nawami: Temples of mother goddess are filled with people from dawn till dusk. Animals mostly black buffaloes are slaughtered to honor Durga, the goddess of victory and might, and to seek her blessing. Military bands play war tunes, guns boom and officers with beautifully decorated medals in full uniform stand there.

When the function ends the courtyard is filled ankle deep with blood. On this very day the god Vishwa Karma, the God of creativity is also worshiped. All factories, vehicles, any machinery instrument and anything from which we make a living are worshipped. 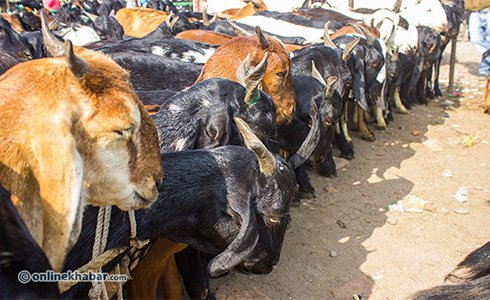 People also give sacrifices to all moving machinery like cars, aero planes, trucks etc. to get the blessing from goddess Durga for protection for vehicles and their occupants against accidents during the year. The entire day is colorful.

From Ghatasthapana to Dashami (10 days), people worship all nine forms of Durga with the faith that the goddess is present to give people her blessings. On the first day of Navaratri — Ghatasthapana, devotees sow jamara (barely seeds). It is believed that jamara is the favorite plant of Goddess Durga, so devotees offer jamara to make her happy and get her blessings.

In some parts of India, Dussehra is considered a focal point of the festival, making it effectively span 10 days instead of 9. Additionally, as Navratri depends on the lunar calendar, in some years it may be celebrated for 8 days, with Dussehra on the 9th.

And nine forms of Goddess Durga — Shailaputri, Brahmacharini, Chandraghanta, Kushmanda, Skandamata, Katyayini, Kaalratri, Mahagauri and Siddhidaatri — are worshipped for the nine days during this festival. The nine days of Durga Puja is called Navaratri.

Rarely anyone dares venture near Maitidevi temple during the day and everyone, except tantric (shamans), invariably stay away from the place at night. Tirtha Man Bajracharya, the head priest at the temple, says, “the oldest edifice was built in 628 AD by Amshu Verma, a warrior under Lichhavi King Shiva Dev”—fully 13 centuries before Chandra Shamsher.

Sankata’s temple is ensconced inside a crammed but quiet Tebahal colony adjacent to the crowded and noisy New Road market. You can pass through any of the alleyways that connect the market and Tebahal colony to enter the temple area.

Devi is the great goddess of the Hindus, the consort of Shiva,and she is worshiped in various forms corresponding to her two aspects: benevolence and fierceness. She is Uma, ‘light’; Gauri, ‘yellow or brilliant’; Parvati, ‘the mountaineer’; and Jagatmata, ‘the-mother-of-the-world’ in her milder guise. Her terrible emanations are Durga, ‘the inaccessible’; Kali, ‘the black’; Chandi, ‘the fierce’; and Bhairavi, ‘the terrible.’

Since 1900 on the Nepali calendar (1957 AD), the Maha Shakti incarnate and the descendants of Shiv Kali’s priests (pujaris) started from Harka Bahadur Shrestha (a Newar) who came from Thimi, near Bhaktapur. His only child, a girl named Krishna Kumari Shrestha, married a boy named Man Bahadur Khadka, a non-Newar. Presently, their descendents are the main priests of the temple.

According to ancient writings in the Vayu Purana and Mahabharata, Bhadrakali came into being by Devi’s wrath, when Daksha insulted Shiva during the great Ashvamedha Yagna (Horse Sacrifice). According to Tantra Rahasya, she arose from the north (Uttaramnaya) face (Amnayas) of Shiva, which is blue in color and with three eyes.

It is believed that Bhadrakali was a local deity that was assimilated into mainstream Hinduism, particularly into Shaiva mythology. Sometimes she assumes a terrible aspect, and is represented with three eyes and four, 12 or 18 hands. She carries a number of weapons, with flames flowing from her head and a small tusk protruding from her mouth.

Located at the center of the Naxal township in the vicinity of Pashupatinath, Dillibazar and the Narayanhiti museum, sits the temple of Naxal Bhagwati. Sited at an intersection, the temple stands erect and distinct despite the encroachment of nearby shops, concrete buildings and busy traffic. It never fails to draw devotees who keep moving in and out of the temple all day. The features of Naxal Bhagwati are remarkably the same as other ‘Devi’ (goddess) temples—its’ three tiered roof, two of which are copper plated, and carvings of other deities surrounding the temple.

Despite a lineup of other temples in the locality, Nardevi is easily distinguishable. The three tired structure with one of the roofs plated in gold and its crafted pillars identify the Nardevi Mandir. According to historical data, the temple is believed to have been established in the 9th century AD by Gunakamadev, the founder of Kathmandu.

Dakshinkali is 18 km south of Ratnapark, Kathmandu. The ancient Kalika temple is to the south of the capital which some believe is why it was named Dakshinkali (dakshin means ‘south’ in Nepali). The Dakshinkali temple dedicated to Kali, the fearful form of Lord Siva’s consort, Parvati.

The myth is that in the 17th century an oracle spoke to King Pratap Malla in the form of a dream, to establish a temple for the goddess. It was said that this would bring him prosperity and that no epidemic would befall his subjects. The king deciphered the omen and the temple was erected.

For Hindus, 32 lachin is a trait that holds great significance. It is believed that there are 32 attributes to perfection, emphasized mostly on women, leading to prosperity and luck. The name ‘Shobha’, in the same regards, means ‘brilliance’ (derived from Sanskrit) or someone bestowed with ‘32 lachin.’ As the name suggests, Shobha Bhagwati, is believed to be a goddess of perfection and brilliance.

Dashain Festival is one of the most important Hindu festivals which is celebrated all over Nepal delightfully. This festival usually falls in the month of September or October and is actually celebrated for 15 days.

It starts from bright lunar fortnight (Shukla Paksha) and ends on the day of full moon (Poornima) according to Nepalese annual calendar. Hindus greatest festival, Dashain honors a great conquest of the gods over the evil demons. The symbol of power, Goddess Durga is worshiped during this festival.

This festival is in fact the ceremony of reunion and fun. People living far away from home or homeland, revisit their home and get together with their families. Similarly, parents buy new clothes to their children. People enjoy eating mouth-watering foods and playing a lot of games including cards. People invite guests, organize feast, visit their relatives’ houses, fly kites, build bamboo swings and get involved in various entertaining activities.

Throughout Nepal, the goddess Durga in all her manifestations is worshipped with innumerable pujas, abundant offerings and thousands of animal sacrifices for the ritual holy bathing, thus drenching the goddess for days in blood.

This year, the first day of Dashain Festival – Ghatasthapana falls on 29 the September. The seventh day Pulpati will be celebrated on 5th October, followed by Asthami on 6th October and Nawami and Dashami on 7th and Dashami 8th October respectively. Additionally, for 5 more days till 13th October which is named as Kojagrat Purnima, the festival continues.

In preparation for Dashain every home is cleansed and beautifully decorated, painted as an invitation to the mother goddess, so that she may visit and bless the house with good fortune. During this time the reunion of distant and nearby relatives occur in every household. The market is filled with shoppers seeking new clothing, gifts, luxuries and enormous supplies of temple offering for the gods, as well as foodstuffs for the family feasting.

Thousands of sheep, goats, ducks, chicken and water buffalo are prepared for the great slaughter. All types of organizations are closed for ten to fifteen days. Laborers are almost impossible to find; from the poor to the rich, all enjoy the festive mood. Anywhere you go, the aroma of 'Vijaya Dashami' is found.

Nepalese people indulge in the biggest festival of the year, Dashain. Dashain is the longest and the most auspicious festival in the Nepalese annual calendar, celebrated by Nepalese of all caste and creed throughout the country. The fifteen days of celebration occurs during the bright lunar fortnight ending on the day of the full moon.

Bijaya Dashami Celebrated All Over Nepal By NEW SPOTLIGHT ONLINE 4 days, 15 hours ago

Taleju Bhavani And Significant To Visit On Mahanavami By NEW SPOTLIGHT ONLINE 5 days, 14 hours ago