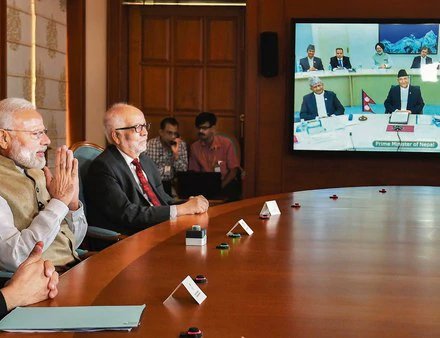 After the inauguration of the 69-kilometre long pipeline between Nepal and India, prime minister K.P. Sharma Oli and Prime Minister of India Narendra Modi greeted each other, terming the event historic.

PM Modi thanked his counterpart PM Oli in his tweet immediately after the inauguration. Reciprocating with PM Modi, Prime Minister Oli also sent a tweet thanking PM Modi and Government of India for supporting the project to complete ahead of the schedule. In his tweet PM Oli said, "We have similar visions of development, prosperity and happiness of our peoples, backed up by solid political commitment and strong determination to realize them."

The 69-kilometre long pipeline, which is 32.7 kilometres on the Indian side and 37.2 kilometres in Nepal has a capacity of uninterrupted supply of two million tonnes of clean petroleum products to the people of Nepal annually.

Inaugurating the project from New Delhi, Modi expressed confidence that bilateral relations between the two countries will continue to further deepen and expand across diverse sectors and reiterated India’s commitment to help the Himalayan nation in its development effort.

In his address on the occasion in Kathmandu, Nepal’s Prime Minister K.P. Sharma Oli described the pipeline project as one of the best examples of connectivity in terms of trade, transit and infrastructure.

Nepal has been importing its entire requirement of oil products from India since 1973 and traditionally oil tankers are being used to transport oil products. The Public Sector, Indian Oil Corporation, the nodal agency for the supplies from its Barauni refinery and Raxaul Depot in Bihar had renewed the agreement with Nepal Oil Corporation in 2017 to continue oil supplies for another five years till 2022.

Proposed for the first time in 1996, the Motihari-Amlekhgunj pipeline project remained in cold storage for a number of years. It gained momentum after Prime Minister Modi’s visit to Nepal in 2014.

While briefing the media on the eve of the unveiling event, Nepal Oil Corporation (NOC) spokesperson Birendra Goit said, “The pipeline will drastically reduce the cost of transporting fuel to landlocked Nepal from India. The Amalekhgunj fuel depot will have the capacity to store up to 16,000 kilolitres of petroleum products."

"This India-Nepal energy cooperation project is a symbol of our close bilateral relations. It will help enhance the energy security of the region and substantially cut down on transit costs," the government of India said in a release on the eve of the pipeline inauguration.

India’s Ambassador to Nepal, Manjeev Singh Puri, described the pipeline as a “game changer for Nepal” in a press interaction earlier.

Although the idea was in place, implementation got stuck in red tape until recently. The project was revived after Prime Minister Narendra Modi’s visit to Kathmandu in 2014. Even after the high profile visit, the initiative did not move ahead due to political tensions in India with Nepal.

The project received fresh impetus when the Indian state-owned Indian Oil Corporation entered into an agreement to supply about 1.3 million tonnes of fuel annually to Nepal. The trade volume is targeted to be doubled by the year 2020.

"The project was initially estimated to cost Rs 275 crore, of which India was to bear Rs 200 crore. Subsequently, the NOC said the total project cost had escalated to almost Rs 325 crore. Commercial operation of the cross-border fuel project will bring down fuel price by at least one rupee per litre,” Nepal Oil Corporation Deputy Director Sushil Bhattarai told PTI, while detailing the project.

Disenchanted over border blockade in 2015, Prime Minister K.P. Sharma Oli sent 150 tankers to China to carry petroleum products. He sent a number of delegations in China to make deal to bring oil. Bitterness of first tenure of PM Oli came to an end during his second visit. Instead of Chinese Oil, Oli requested India to start the construction of pipeline in his second visit in 2017.

At a time when many India supported projects have gotten delayed, the pipeline project demonstrated the capability and capacity to complete before the schedule.

ADB Growth Forecast At 4.1% By A Correspondent 1 week, 3 days ago

KATHMANDU DECLARATION Resilient Development By A Correspondent 1 week, 3 days ago