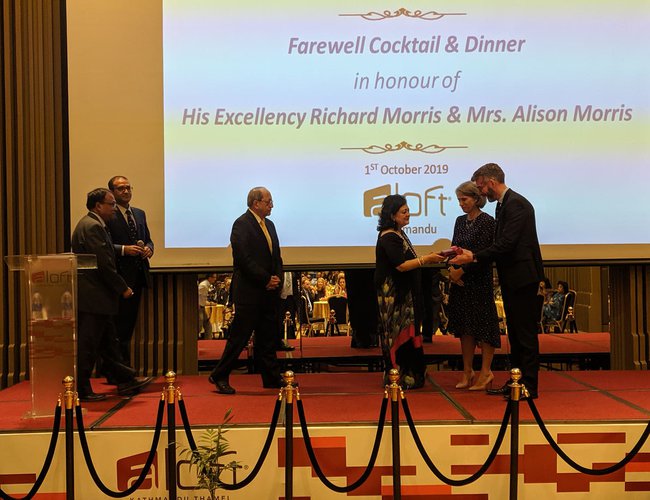 How an organization work with the presence of accommodating and dynamic leadership. This is what the president of Nepal Britain Society Pratima Pande has shown.

Taking all board members in the activities, Pande has turned the Nepal Britain Society a vibrant organization Ambassador of Nepal to United Kingdom Richard Morris mentioned during a farewell dinner hosted in his honor.

Ambassador said that Pande has immensely contributed to enhance and strengthen people to people relations between the two countries. 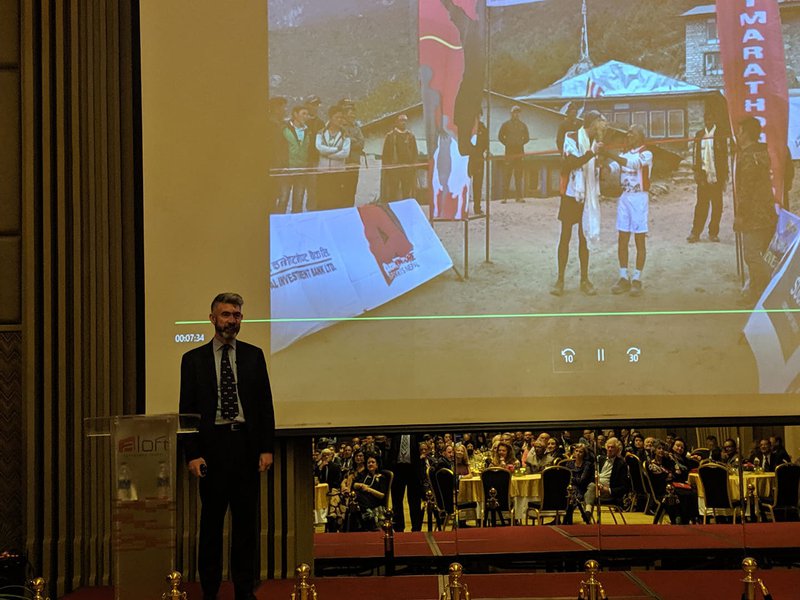 Attended by large numbers of dignitaries and people from all walks of life, ambassador Morris presented his Charity run in the Everest Marathon. In his slide show, he has shown challenges and difficult adventurous marathon run. His trekking to Dolpa was another milestone.

Although he involved in countless activities in Nepal during his four years tenure as an ambassador of the United Kingdom to Nepal, ambassador Morris's participation in the Everest Marathon 2019 was the most memorable and adventurous. 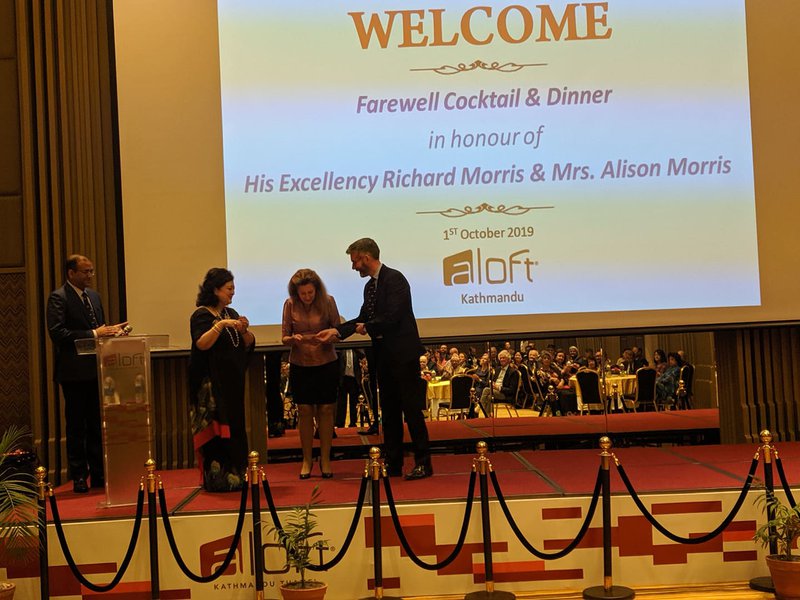 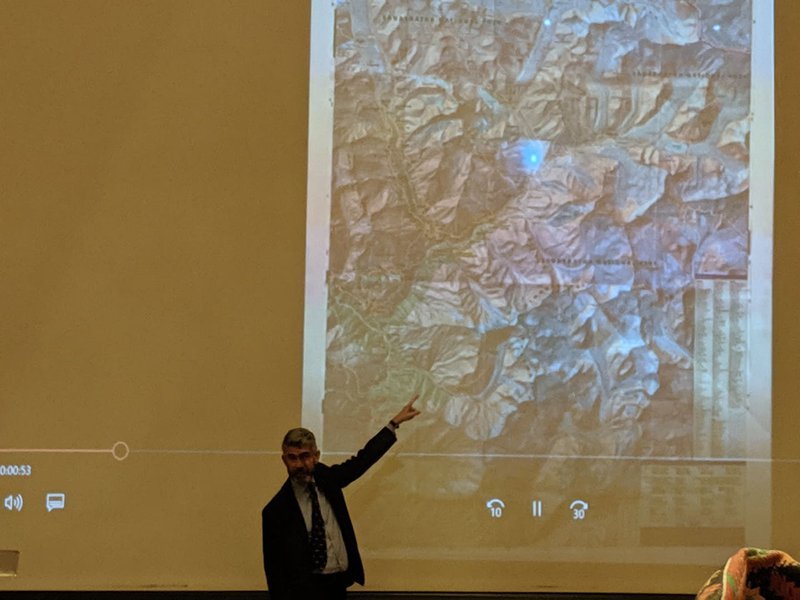 During his tenure ambassador Richard has seen Nepal’s recovery from a devastating earthquake and grim situation with declining tourism. The visit of Prince Harry was a major booster to promote tourism in Nepal.

The program was conducted by Sanjeev Kumar Pandey. 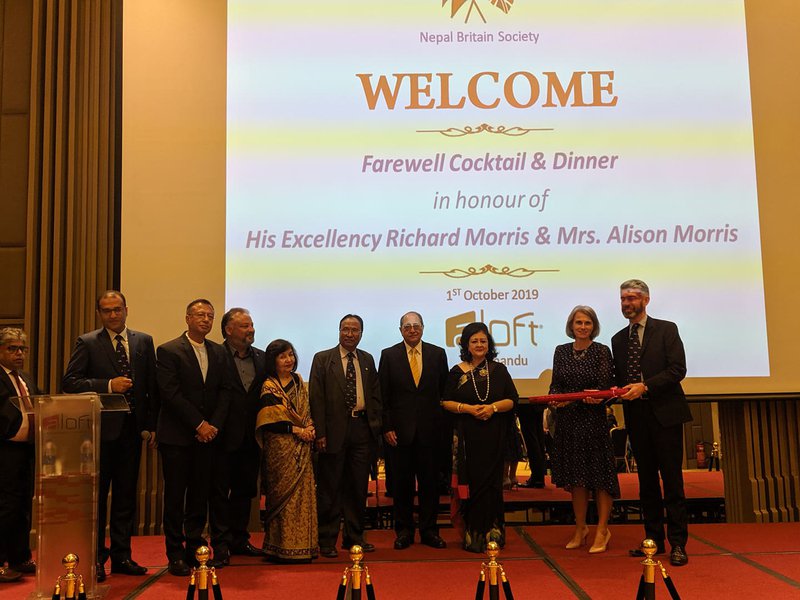 This evening, I am very happy to welcome all of you as the president of the Nepal Britain Society to this farewell dinner in honor of Ambassador Richard Morris and Mrs. Alison Morris.

His Excellency has resided in Kathmandu for four years and we are sad that both of them are leaving as their tenure comes to an end in November. We all remember welcoming them in the function held at the Yak and Yeti Hotel in 2015.

During his posting, Richard has been a very dynamic Ambassador interacting with the government Nepal, The Nepal Britain Society, British Chamber of Commerce and various other organizations and traveling and trekking in many parts of the country.

In 2016, Nepal Britain Society celebrated the 200 years of bilateral relations between our two countries with many activities such as musical programs, A Shakespeare Drama A Mid-Summer Nights Dream at the British School, Charitable programs, book launch, Art Exhibition, and various other functions. The British government has also generously supported our heritage conservation activities in Nepal.

His Excellency and I along with Rohit Ranjitkar of the Kathmandu Valley Preservation Trust (KVPT) were privileged to welcome and show His Royal Highness Prince Harry, Duke of Sussex to see the Visheshor Temple and the Patan Durbar Square which he enjoyed touring in March 2016.

Members of the Nepal Britain Society are people, who have studied, lived, worked and enjoy visiting London, UK. Today we have all come together to say goodbye and thank you for a good, kind, friendly and very helpful ambassador. 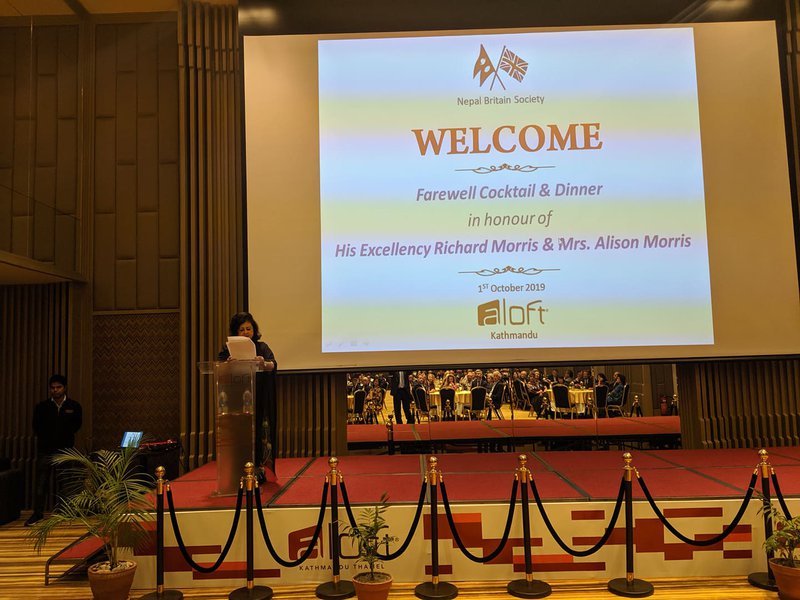 It has been wonderful knowing Richard and Alison and their family and we will miss them here in Kathmandu. I would like to thank the Trustees and the board members for always helping me in running the many activities of the society. I would like to thank treasurer Jitendra Rajbhandary and a big thanks to Sanjeev Pandey who has been the backbone of the society, always sending out the invitations and emails for all our programs without ever complaining and taking part in our NBS programs with great enthusiasm. Our trustee Madhukar Rana and Mrs. Greta Rana could not attend as they are both unwell. We miss them this evening.

Nepal Britain Society is very sad to mention the passing away of their excellencies Dr. Singha Bahadur Basnyat and Prabal Sumher Rana this year. May their souls rest in eternal peace. Both were members of the Foreign Ministry in Nepal and were exceptional diplomats and ere both ambassador to the U.K.

I would also like to thank our wonderful friends and supporter of the Society Sulab Agrawal of Golyan Group, Ashoke Ran-Himalayan Bank Limited, Prithivi Pande-Nepal Investment Bank Limited and Nepal Britain Society for hosting this dinner and the Aloft Hotel and it management Vickram Singh, GM Deependra Singh, the food and beverage director and all the staff of their hard work in arranging tonight’s party.

Pande is the president of the Nepal Britain Society. Excerpt from her statement delivered at farewell dinner given to British Ambassador to Nepal Richard Morris.

Nepal Is Committed To End All Kinds Of Discrimination: Foreign Minister Gyawali By Agencies 3 hours, 49 minutes ago