Nepal To Play Australia On October 10 For World Cup Qualifier

Nepal To Play Australia On October 10 For World Cup Qualifier 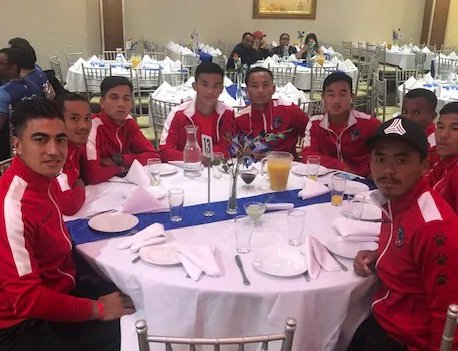 Football in Australia is full of surprises, and there’s a big one in store on Thursday night in Canberra.

Nepal may be football minnows and rank outsiders to beat Australia on their own patch in the AFC World Cup qualifier, but they’ll have raucous support in the stands.

The Nepalese community in Australia numbers around 100,000, around half of which are estimated to live in Sydney, and they will be travelling en masse to the nations capital.

Watch the Socceroos play Nepal in 2022 World Cup Qualifiers on Kayo Sports. Get your 14 day trial and start streaming instantly!

The first batch of 5,000 tickets reserved for Nepalese fans sold out within an hour. With more tickets now released, some within the community believe there could be as many as 8,000 cheering on the visitors.

Unlike their South Asian neighbours, Nepal has always been more passionate about football than cricket.

That is reflected here in Australia by the fact that in western Sydney, the Nepalese community runs its own competition with 25 clubs (typical names include the Gurkha Spurs, the Himalayan Yaks and Sagarmatha FC, the Nepali name for Mount Everest), and featuring approximately 1400 players.

Bijen Batajoo is the President of the Australian Nepalese Football Association — he helped organise a team “meet & greet” for fans in Parramatta on Sunday. Over 300 attended, and Bijen says they cannot wait for Thursday.

“When we heard the news (about the game) we were so happy — it’s a historic moment for us playing Australia. I’ve been here for twenty years, and I never thought it would happen. It’s a dream to see Nepal playing the mighty Socceroos” he says.

On the pitch, it’s been a tough few years for the “Ghorkalis”. The former President of the All Nepal Football Association — Ganesh Thapa — was banned by FIFA for ten years in 2015, after he was found guilty of bribery.

Additionally, the Nepal national league, which had started life, albeit in a different guise, all the way back in 1934, ran into difficulties in 2013. It went into abeyance for five seasons, only returning for the 2018/19 campaign. The second season of the relaunched competition will begin in December.

If that wasn’t enough, the Nepal earthquake of 2015 which killed almost 9,000 people, also decimated facilities around the country — including Nepal’s national stadium.

The Dasharath Stadium is the only venue in Nepal capable of hosting international games, but reconstruction of the ground has been delayed over debates as to whether it should be fully revamped, or just repaired.

The ground is now nearing completion, but it has meant the Ghorkalis being forced to play their first four qualifiers away from home.

The team were flattened 7-0 in their opening game in Kuwait, although temperatures of 42 degrees hardly helped their cause. But they recovered superbly to defeat Chinese Taipei last time out, with Anjan Bista scoring both goals in a 2-0 win.

Bista is one of several Nepalese players with overseas experience. He played in Spain for Marbella United FC, a club which partners with the American College in Spain to offer ten months of academic study and on-pitch development for young footballers from around the world.

Bista is now back home, playing for national champions, Manang Marshyangdi, and all but three of the Nepal squad plays in the domestic competition.

The exceptions are goalkeeper, Kiran Chemjong, who is in India with Minerva Punjab, star striker Bimal Gharti Magar who is in the Maldives with TC Sports Club, and defensive midfielder Rohit Chand, who won Indonesia’s Player of the Year award in 2017/18, after winning the title with Persija Jakarta.

Gharti Magar is the team’s big star. A pacy left-footed striker, he made his national team debut at 14, and once scored four goals in a trial for Twente Enschede, before spending time with Anderlecht and Genk’s Academy teams.

Credit of News and Photo: foxsports.com

Tiger Woods Seriously Injured In A Car Accident By Agencies 6 days, 17 hours ago