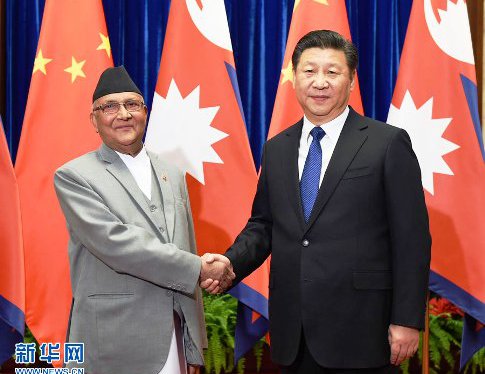 Final preparation for the visit to Chinese President Xi Jinping is going on. Roads are decorated and security has tightened in Kathmandu Valley. He will travel to Nepal on Saturday and Sunday for a state visit, the first by a Chinese president in more than two decades. He will spend 20 hours in Nepal on the way back to his country after taking part in a summit with Indian Prime Minister Narendra Modi.

Chinese President Xi jinping is visiting India on October 11-12 for an "informal summit" with Indian Prime Minister Narendra Modi in the southern coastal city of Chennai. The meeting will provide an opportunity for the two leaders "to exchange views on deepening" the bilateral partnership, read a statement by India's Foreign Ministry. Modi and Xi will also visit the nearby temple town of Mamallapuram.

Both leaders last met one-on-one at a resort in Wuhan, China, in April 2018.

In recent years, India has been worried about the strengthening of ties between Nepal and China.

Beijing has pledged support for a slew of infrastructure and development projects in the country, which have helped increase China's clout in Kathmandu.

Local media have reported that Xi and Nepal's PM KP Sharma Oli will oversee the signing of several agreements on infrastructure projects including a trans-Himalayan railway to connect the two countries.

India Provides Grant For The Construction Of New School Building In Butwal By NEW SPOTLIGHT ONLINE 2 days, 11 hours ago

PM Oli Adopted A Rhino By Agencies 3 days ago

338 Households Displaced In Fungling Due To Fire By Agencies 3 days, 14 hours ago