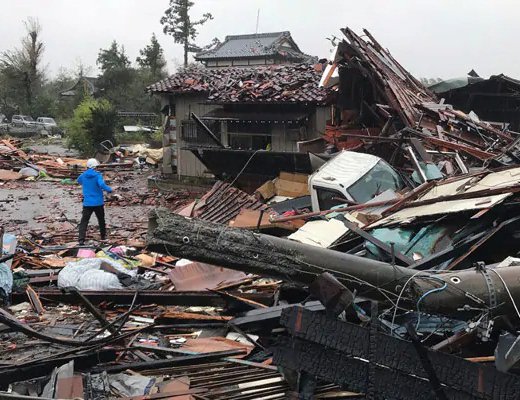 By Sunday morning, the significantly weakened storm had moved back off land, but it left in its wake a trail of destruction and forced Rugby World Cup organisers to cancel another match.

Serious flooding was reported in central Japan's Nagano, where a burst levee sent swollen waters from the Chikuma river gushing into residential neighbourhoods, flooding homes up to the second floor.

"It is not clear how many of those households have been affected," he added, saying while the river level was no longer on the rise, water was still going higher in residential areas.

Aerial footage showed a row of bullet trains half-submerged in muddy waters at a depot in Nagano.

Overnight Saturday, more than seven million people were placed under non-compulsory evacuation orders, with tens of thousands heeding the call and moving into government shelters to ride out the storm.

Hagibis caused transport chaos over a long holiday weekend in Japan, grounding all flights in the Tokyo region, and forcing the suspension of most trains and many bullet trains serving the capital.

Hagibis smashed into the main Japanese island of Honshu around 7:00 pm (1000 GMT) Saturday as one of the most violent typhoons in recent years, with wind gusts of up to 216 kilometres per hour (134 miles per hour).

Well before making landfall, the outer bands of the storm claimed their first victim, a driver whose van was flipped over in the strong gusts.

The second confirmed death was a man in his 60s killed in a landslide north of Tokyo.

Another man in his 60s was also confirmed dead after he was pulled from his flooded home in Kawasaki city, near Tokyo.

"Unprecedented heavy rain has been seen in cities, towns and villages for which the emergency warning was issued," JMA forecaster Yasushi Kajiwara told reporters.

"It is important to take action that can help save your lives."

Across large swathes of the Tokyo region and central Japan, rivers burst their banks and authorities implemented emergency discharges from dams that had reached maximum capacity.