Nepal And China Agree To Launch The Construction Of The Cross-Border Railway Soon. Full Text Of A Joint Statement

Nepal And China Agree To Launch The Construction Of The Cross-Border Railway Soon. Full Text Of A Joint Statement 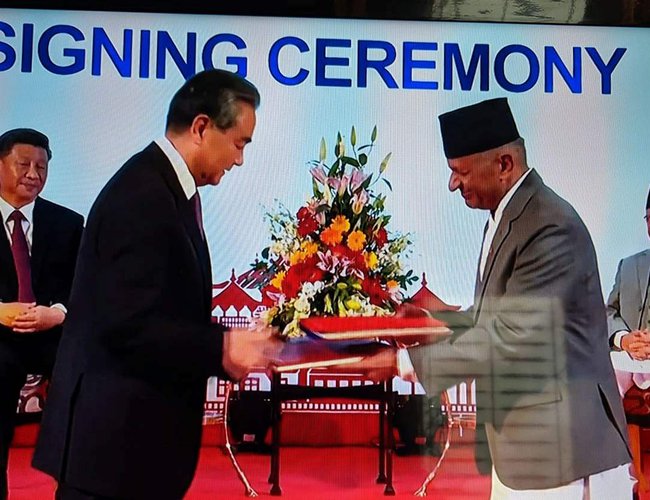 Full text of a Joint Statement

At the invitation of Rt. Hon. Bidya Devi Bhandari, President of Nepal, H.E. Mr. Xi Jinping, President of the People's Republic of China, paid a state visit to Nepal from 12 to 13 October 2019.

During the visit, President Xi met with President Bhandari, held talks with Prime Minister K P Sharma Oli and attended the welcoming banquet by President Bhandari. In a warm and cordial atmosphere, leaders of the two countries reached broad understanding through in-depth exchange of views on bilateral relationship and regional and international issues of common concern.

Nepal and China take the Belt and Road Initiative as an important opportunity to deepen mutually-beneficial cooperation in all fields in a comprehensive manner, jointly pursue common prosperity and dedicate themselves to maintaining peace, stability and development in the region.

The bilateral relationship between Nepal and China has entered a new phase. Both sides decided to, on the basis of the Five Principles of Peaceful Coexistence, Charter of the United Nations and principles of good neighborliness, elevate Nepal-China Comprehensive Partnership of Cooperation Featuring Ever-lasting Friendship to Strategic Partnership of Cooperation Featuring Ever-lasting Friendship for Development and Prosperity.

The Nepali side reiterated its firm commitment to One China policy, acknowledging that Taiwan is an inalienable part of the Chinese territory and Tibet affairs are China’s internal affairs, and the determination on not allowing any anti-China activities on its soil. The Chinese side reiterated its firm support to Nepal in upholding the country's independence, sovereignty and territorial integrity, and its firm support and respect to Nepal's social system and development path independently chosen in the light of Nepal's national conditions.

3.The Chinese side congratulated Nepal on the historic and epoch-making political transformation and its rapid economic and social development. It believed that the Nepali people would unite as one and keep marching towards the vision of 'Samriddha Nepal, Suhki Nepali" ('Prosperous Nepal, Happy Nepali'), so as to achieve political stability, social harmony and rapid economic development. The Chinese side expressed willingness to continue interacting with the Nepali side on the experience of governance.

The Nepali side congratulated on the 70th Anniversary of the Founding of the People's Republic of China and expressed its admiration to China's miraculous achievement in development over the past 70 years and sincerely wished that under the guidance of Xi Jinping Thought on Socialism with Chinese Characteristics for a New Era, the Chinese people would keep striving to realize the two centenary goals and build China a great modern socialist country that is prosperous, strong, democratic, culturally advanced, harmonious, and beautiful.

3.Both sides underlined that high-level contacts are of special importance to the development of bilateral relations. The two sides agreed to maintain the momentum of high-level visits, deepen political mutual trust and expand exchanges and cooperation between government ministries, departments, legislatures and political parties at all levels.

3.The two sides agreed to intensify implementation of the Memorandum of Understanding on Cooperation under the Belt and Road Initiative to enhance connectivity, encompassing such vital components as ports, roads, railways, aviation and communications within the overarching framework of trans-Himalayan Multi-Dimensional Connectivity Network with a view to significantly contributing to Nepal's development agenda that includes graduating from LDC at an early date, becoming middle income country by 2030 and realizing the SDGs by the same date.

The two sides, while recalling the MoU signed between the two countries on 21 June 2018 on Cooperation in Railway Project, agreed to conduct the feasibility study as outlined in the MoU signed on 13 October 2019, which will lay an important foundation to launching the construction of the Cross-Border Railway. Both sides also reiterated their commitment to extend cooperation on Kathmandu-Pokhara-Lumbini Railway Project.

The two sides welcomed the reopening and restoration of the freight functions of the Zhangmu/Khasa port, and will optimize the functions of the Jilong/Keyrung port and open the Lizi/Nechung port at the earliest possible time and build necessary infrastructure on the Nepali side of the border.

Both sides would keep implementing the Protocol concerning the Utilization of Highway in Tibet, China by Nepal for Cargo Transport and the Protocol to the Agreement on Transit Transport. On the basis of maintaining the long-term operational condition of the Araniko Highway, both sides agreed to cooperate on upgrading and reconstructing the highway on a priority basis in a step-by-step manner. The Chinese side conveyed its readiness in initiating the repair of Syaphrubesi-Rasuwagadhi Highway.

Realizing the importance of enhanced level of connectivity between the two countries, the two sides agreed to proactively cooperate on the feasibility study for the construction of tunnels along the road from Jilong/Keyrung to Kathmandu.

The Chinese side noted the request made by the Nepali side for the construction of Kimathanka-Leguwaghat section of the Koshi Highway and agreed to consider this project in future cooperation plan and requested the Nepali side to submit a detailed proposal.

The two sides reiterated their commitment to undertake study on the possibility of cooperation, as reflected in the Joint Statement issued in Beijing on 21 June 2018, for the development of the three North-South corridors in Nepal, namely Koshi Economic Corridor, Gandaki Economic Corridor and Karnali Economic corridor in order to create jobs and improve local livelihood, and stimulate economic growth and development.

The Chinese side will extend assistance for training Nepali technical human resources in the field of railway, road and tunnel engineering as well as inland waterways and shipping.

Both sides welcomed the consensus reached by the civil aviation authorities of the two countries on expanding the air rights arrangements, under the framework of which the airlines of both countries are encouraged to launch/operate more direct air services. Both sides will coordinate closely to speed up the construction of the Pokhara International Airport so that it would start operation at an early date.

The two sides expressed satisfaction over the successful commercial operation of Nepal-China cross-border optical fiber cable and agreed to further strengthen cooperation on information and communications for mutual benefit.

Under the framework of Nepal-China Joint Commission on Economy and Trade, the two sides will establish a working group on investment cooperation and a working group on trade led by secretary/vice minister-level officials or their designates so as to facilitate bilateral investment and trade. The Chinese side welcomed the Nepali side to participate in the National Exhibition of the Second China International Import Expo to be held in Shanghai in November 2019.

Both sides will hold comprehensive discussions with a view to strengthening trade relations between the two countries. The Chinese side will take positive measures to expand Nepal’s export to China. The Chinese side will consider providing technical support for the establishment of a multifunctional laboratory in Nepal and extend necessary cooperation to make Tatopani Frontier Inspection Station at Larcha fully functional. Nepal will facilitate the Chinese banks to open their branches and other financial services in Nepal with a view to facilitating trade and investment between the two countries. Both sides will complete their internal procedures at the earliest time for the operationalization of the Protocol to the Transit Transport Agreement and try their best to implement it at an early date.

Both sides welcomed the signing of the Protocol on Phytosanitary requirements for the Export of Citrus Fruits from Nepal to China and agreed to conclude MoU on Cooperation on Import and Export of Food Safety at the earliest.

The two sides will continue cooperation on production capacity and investment according to the principles of 'dominated by enterprises, respecting business principles, adhering to market-orientation and following international common practice'.

On the basis of the Memorandum of Understanding on Energy Cooperation between the Ministry of Energy, Water Resources and Irrigation of Nepal and the National Energy Administration of the People’s Republic of China signed on 21 June 2018, both sides will bring into full play the Joint Implementation Mechanism (JIM) on Nepal-China Cooperation in energy sector, to carry out exchanges and cooperation in the fields of hydropower, wind power, solar power, biomass energy and other kinds of new energy as well as grid systems, etc. Both sides agreed to jointly carry out Nepal-China Electric Power Cooperation Plan and complete it within one year. Both sides agreed to take this Plan as an important reference for the next step of bilateral electric power cooperation and promote its implementation.

The Nepali side extended its deep appreciation to the Chinese side for the valuable support it has been providing in Nepal’s development efforts and for the timely, spontaneous and generous support extended to Nepal’s reconstruction after the earthquake in 2015.

The Chinese government will continue to provide assistance to Nepal's economic and social development within its capacity with an emphasis on strengthening cooperation in the field of improving people's livelihood.

The Chinese side attached great importance to the aspiration of the Nepali side to establish a multidisciplinary Madan Bhandari University for Science and Technology as a mark of respect to People’s Leader Late Madan Bhandari and will extend support at the earliest date after the Nepali side chooses a suitable site for the university. Both sides will continue their discussion on the basis of the report to be submitted by the site visit working group of the Chinese side.

The Chinese side is willing to expedite the project of improving the quality of supplied water in Kathmandu.

7.The Chinese side noted Nepal’s proposal on Integrated Development, including resettlement of scattered population in the Himalayan Region of Nepal. The Chinese side is willing to share experiences and consider cooperating with the Nepali side on this proposal.

Both sides expressed satisfaction with the signing of the Agreement between the Government of Nepal and the Government of the People’s Republic of China on Boundary Management System, which will improve the level of boundary management and cooperation for both sides.They were also satisfied with signing the Treaty on Mutual Legal Assistance in Criminal Matters and expressed hope for an early conclusion of the Treaty on Extradition. The two sides agreed to strengthen cooperation between the law enforcement agencies on information exchanges, capacity building and training. In the next 3 years, China will offer 100 training opportunities to the Nepali law enforcement officers each year. With a view to promoting cooperation in security sector, the two sides will continue to strengthen cooperation in the exchange of visits of the security personnel, joint exercises and training, disaster prevention and reduction and personnel training.

President Xi Jinping sincerely invited Nepali leaders to visit China again at the convenience of both sides. The two sides will stay in touch via diplomatic channels.

Nepal And Israel Inked Agreement To Provide Temporary Employments For Nepali Youths In Israel By Agencies 4 hours, 56 minutes ago