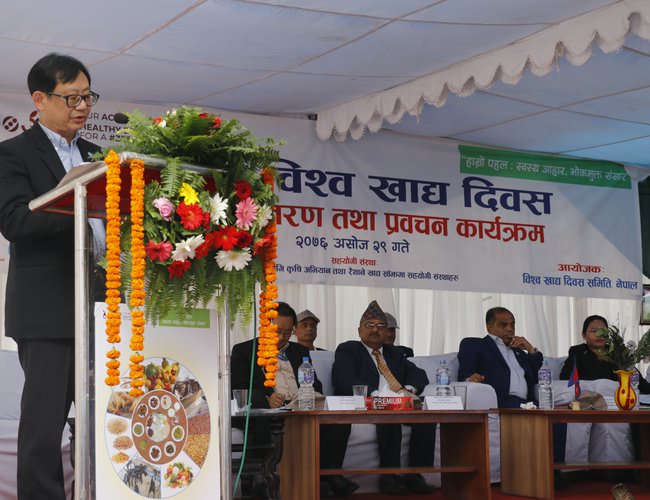 Nepal observed 39th World Food Day today to every year around the world on 16 October in honor of the date of the founding of the Food and Agriculture Organization of the United Nations (FAO) in 1945. This year’s theme of the WFD is “Our actions are our future. Healthy diets for a #ZeroHunger world.”

FAO celebrates World Food Day each year on 16 October to commemorate the founding of the Organization in 1945. Events are organized in some 150 countries across the world.

Speaking on the occasion, Minister for Agriculture and Livestock Development (MoALD) Chakrapani Khanal said that the Nepal has reiterated its commitment to work together with development partners towards addressing food and nutrition security.

In his keynote address, FAO Representative Dr SomsakPipoppinyo said that more than 820 million people suffer from hunger, while 670 million adults and 120 million girls and boys (from age of 5 to 19 years) are obese around the world.

Dr Somsak highlighted the need for scaling up efforts to address the health problems from changing diets, strategies and policies to ensure the availability and affordability of healthy foods.

Minister Khanal and the Minister of State Choudhary gave way the cash prize and letter of appreciation to the 18 farmers and the entrepreneur for outstanding performance in their respective sectors.

16 October 2019, Rome - At the global World Food Day ceremony today speakers called for bolder and faster action across sectors to make healthy and sustainable diets available and affordable for all.

This year's World Food Day - with the theme "Our actions are our future. Healthy diets for a #ZeroHunger world" - takes place in the context of rising global hunger but also increasing overweight and obesity. FAO and its partners believe that affordable solutions to reduce all forms of malnutrition exist, but they require greater global commitment and action.

"Collective action is the high road to tackling a global challenge such as hunger in the world," said Italy's Prime Minister Giuseppe Conte in his keynote speech.

The Prime Minister gave reassurance of Italy's support for a "vision of integrated agriculture that supports the planet and cultural identity", and stressed the need to understand development "as a genuine international collaboration, as politics in the noblest sense" to achieve the Sustainable Development Goals (SDGs).

Both Conte and FAO Director-General Qu Dongyu welcomed an announcement by UN Secretary-General AntónioGuterres of the convening of a UN Food Systems Summit in 2021 as part of the Decade of Action to deliver the SDGs. Conte proposed that Italy host the event, and was thanked by Qu for the offer.

Pope Francis in a special message read out at the event, stressed that the "battle against hunger and malnutrition will not end as long as the logic of the market prevails and profit is sought at any cost".

The pontiff urged for a cultivation of lifestyles inspired by gratitude, moderation and solidarity, and the need to promote economic institutions and social initiatives that support the poor.

"We must come to realize that what we are accumulating and wasting is the bread of the poor," Pope Francis added.

In his opening remarks, FAO Director-General Qu Dongyu warned how "hunger and malnutrition will be major barriers to achieving the SDGs by 2030 if we do not act now!"

The FAO chief stressed the importantce of collaboration and the role everyone needs to play - from governments, food companies, the public sector, research instituions to consumers - to make progress towards enabling healthy diets for all, and to halt and hopefully reverse the current trend of rising hunger, overwight and obesity.

"We need strong political will and commitment. We need to invest in nutrition and for nutrition. We need to walk hand-in-hand and build healthy and sustainable food systems," added the FAO Director-General.

The FAO chief announced the UN agency's biennial theme for 2020-2021 - Promoting healthy diets and preventing all forms of malnutrition - and reaffirmed FAO's commitment to the global goal of ending hunger and malnutrition in all its forms by 2030.

In his remarks, President of the International Fund for Agricultural Development (IFAD) Gilbert F. Houngbo said: "We can reach our commitment to end hunger. Our success will depend on transforming global food systems so that they are inclusive of women, youth and indigenous peoples. So that they are sustainable - environmentally, socially, and economically. And so that they contribute to healthy diets for all. With the right policies and the right investments in agricultural and rural development we can create a food secure world where both hunger and poverty are dramatically reduced."

David Beasley, Executive Director of the World Food Programme (WFP) for his part echoed the call to end food waste and urged individuals around the world to join WFP's campaign to #StopTheWaste: "The amount of food wasted globally is enough to feed another 2 billion people, so in a world where every five seconds a child dies from preventable causes like hunger and malnutrition this is totally unacceptable. We have a solution to hunger in our hands, just by being better stewards of the food we already have. If we all come together, and work together, we can achieve Zero Hunger - but we must not rest until every child, everywhere, goes to bed with a full stomach."

Sergio Mattarella, Italy's President sent a message a support, highlighting that "food insecurity is certainly one of the worst consequences of climate change".

Ministers from several countries also spoke at the event - a testimony of the importance of making healthy diets accessible and affordable for all.

Making the case for healthy and sustainable diets

During his remarks, the FAO Director-General stressed that there are over 820 million hungry people in the world. He noted however, that while the total number of those chronically undernourished has been increasing in recent years, the rate is decreasing compared to total population of the planet.

Qu also underscored that over 2 billion adults, and nearly 380 million children and adolescents, are overweight or obese. This is because our current food systems are failing to ensure food security for all and deliver on healthy diets whilst contributing to environmental degradation.

From agricultural production to processing and retailing, there is little space for fresh, locally produced foods as high-yielding and profitable crops take priority.

Although enough food is produced globally, food is not produced where it is most needed.

Recent estimates by FAO and the Organization for Economic Cooperation and Development indicate that globally, agricultural productivity is projected to increase faster than the 15 percent increase in the demand for agricultural products over the next decade - with decelerating greenhouse gas emissions and without substantial expansion in land use.

But instead of providing incentives to farmers to produce more nutritious food, many countries keep on subsidizing products with low nutritional value, favoring staple foods - wheat, rice, maize - over fruits and vegetables. This has negative implications for nutrition and dietary diversity.

Nutrient-dense foods like eggs, milk, fruits, and vegetables can be very expensive, especially in poorer countries, which makes it harder for people to move away from staples. In richer countries, and a growing number of lower income countries, unhealthy foods are cheaper, readily available, and more convenient.

Unhealthy diets are one of the leading causes of death across the globe from non-communicable diseases (NCDs), including cardiovascular diseases, diabetes and certain cancers, taking a large toll on national health budgets. Obesity is projected to cost $2 trillion annually in lost economic productivity and direct health care costs worldwide.

How to make healthy diets available and accessible for all

To address this situation, FAO calls for: better incentives for the world's agricultural producers; easier-to-understand and more comprehensive food labels and responsible advertising to help consumers choose healthier diets; more sustainable trade with clear rules; and a push to think of nutrition as part of food safety.

The private sectors should also re-formulate products to make them more nutritious whilst food companies that produce nutritious foods could be given incentives to make their products more accessible and affordable.

ICT should also be applied more widely along agriculture value chains to create new platforms, reduce urban-rural disparity and the potential of the smart phone as a new farming tool should be tapped for higher productivity.

FAO is working with partners and communities around the world to step up efforts to achieve Sustainable Development Goal 2 - Zero Hunger and healthy diets.

This includes developing with the World Health Organization guiding principles on "Healthy Sustainable Diets", supporting the implementation of the Decade of Action on Nutrition (2016-2025), and providing support for global, regional and national food security and nutrition policies, strategies and programs.

India Provides Grant For The Construction Of New School Building In Butwal By NEW SPOTLIGHT ONLINE 1 day, 5 hours ago

PM Oli Adopted A Rhino By Agencies 1 day, 18 hours ago

338 Households Displaced In Fungling Due To Fire By Agencies 2 days, 7 hours ago

Chanda Led Maoist And The Government To Hold Talks By NEW SPOTLIGHT ONLINE 2 days, 18 hours ago