Implemented by Ministry of Agriculture Development in partnership with provincial and local level governments, local poor and marginalized farmers and Federation of Nepalese Chamber of Commerce and Industry (FNCCI), with grant from Asian Development Bank, Raising Incomes of Small and Medium (RISAM) Farmers Project has shown how integrated and targeted agriculture can help uplift the life of poor and marginalized farmers 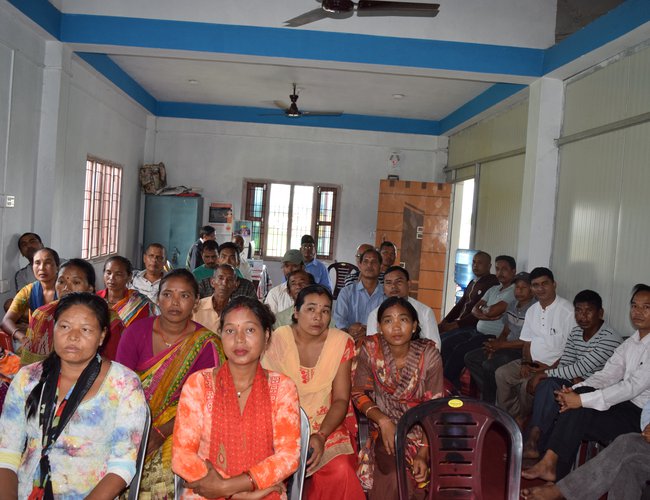 Having small patches of land and depending upon subsistence traditional agriculture practices, majority of these farmers, who lived below the poverty line or an income of US$ 1 per day, were considering alternatives.

However, they did not have other immediate options available. Knowing their compulsion, the processors used to purchase honey in throwaway prices. Furthermore, the farmers had to wait for a year to receive the money.

As the farmers were in dilemma whether to continue bee keeping or move to other alternatives, the implementation of Raising Incomes of Small and Medium Farmers Project came as a savior.

With the financial and technical support, seed money and market linkage, bee producers of Tulsipur have not only revived the bee keeping but also established their own brand of honey in Nepal maximizing their income up to two times.

From virtually in the process of extinction, bee keeping in Tulsipur, including Tarigaun, has now flourished and it has contributed immensely to improve the living condition of the people. 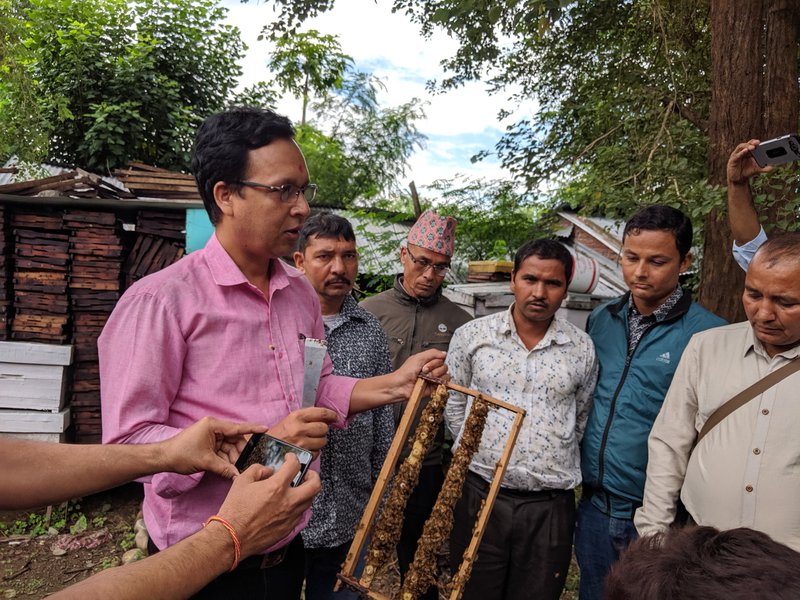 With the availability, technical support, processing center and buyers nearby, farmers have their own voice and own choice.

Madhav K.C, owner of Tarigaun Ward 8 of Tulsipur Sub-Metropolitan, Prakritik Maha Utpadan and Mauri Palan Farm, is an eyewitness of all these transformations. Receiving grant under agribusiness enterprise and firm for honey under value chain functioning input supply, K.C’s firm has set its objective to improve quality, productivity and reduced cost of production of honey.

He has been disseminating the improved practices for honey production among producer groups and thus increased income of participating farmers. With Rs. 44,10,050.00 grant under the project and his own investment of Rs. 5949739, KC produced 5300 queens from 500 bee hives and earned Rs. 32,55000 last year.

“The project has taught us many good lessons. Supporting the processing units and queens at the producing center, the project has ended woes of farmers to search market and new technology,” said KC.

From emptying bee hives and jumping to other profession, Narayan Prasad Poudel,52, has returned to bee keeping and become a leading honey producer of Tulsipur Municipality, Ward No, 10 of Tarigaun. Starting from 5 hives of bees eight years ago, Poudel has now 150 hives on his own, making an annual income of over Rs.200,000.

In the competitive market, a small farmer cannot compete with lone efforts. Realizing this, the farmers are organized in groups, of up to 20 persons. Supporting the group, Swargadwari Bee Concern Pvt Ltd, a processing and selling company, has brought the difficulty, that is, to compete in the market, to an end for many farmers in Tulsipur Municipality 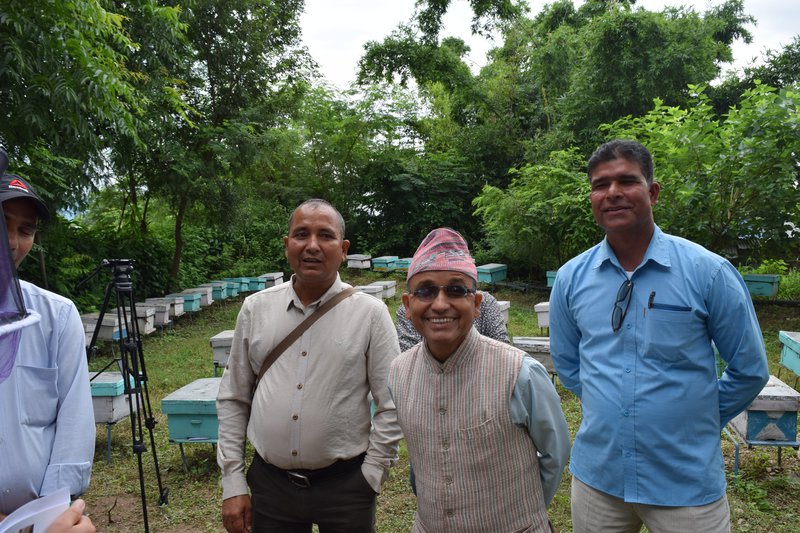 Founded by Moti Hamal with grant from the project, the company has been now working to improve the quality and productivity and reduce the cost of production of honey. The company has been disseminating improved practices for honey production among producer groups and it has been helping increase the income among participating farmers.

"We have been purchasing honey from the community groups in proper market prices. We have been paying the dues to farmers in a matter of two to three months," said Hamal, who has already established her honey selling center in Kathmandu, Nepalgunj, Pokhara and other major cities. Some 60 metric tons of honey has been produced with the total processing of the same amount.

With the grant assistance of Rs. 9873017.06 and his own investment of Rs.944,8688.04, and the plant costing Rs.19321706.00, the company has improved the process unit building with marketing stalls, machine tools and equipments such as refrigerator. To run its operation smoothly, the company has increased 750 additional bee hives.

"We have been purchasing raw honey for Rs.300.00 per kilogram. We have been selling honey at an average of Rs.500.00 per kg in Kathmandu," said Hamal, who has been happy with the level of production now.

Inspired by the growing demand of queen bee, K.C. has been meeting almost all the supply needs of new queen bee to the farmers of his area. "We have produced enough bees last year," said K.C.

Declared as a honey pocket sector, Tulshipur Municipality has established itself as a major honey hub of currently province 5 and previously mid-western region of Nepal. "Our honey has our brand and the demand of honey from our products is growing. We exported some amount of honey to Japan and United Arab Emirates last year," said Hamal. 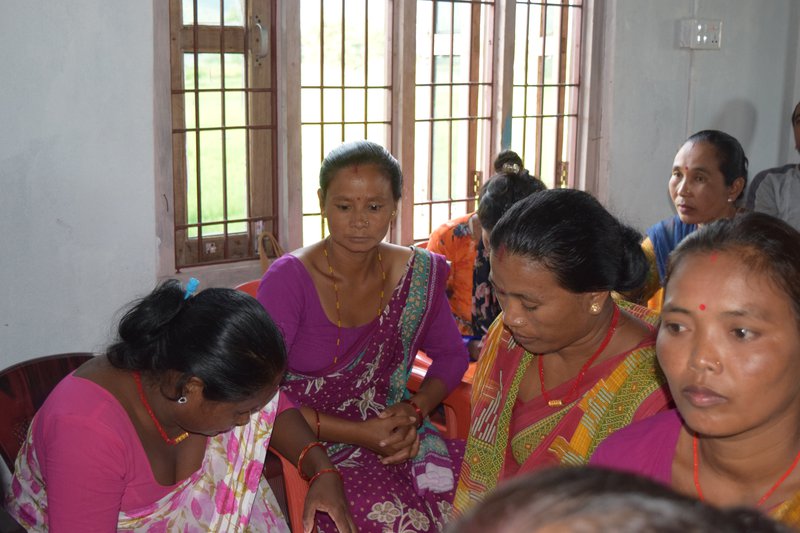 Federation of Nepalese Chamber of Commerce and Industry, Dang District and Nepal Rastra Bank and Ministry of Agriculture have been facilitating with the needed support to the farmers.

With the involvement in value chain and to provide market information abut honey, FNCCI, Dang district, has been in a key step in the process. "We are happy to work with local farmers, producers and channeling the products to the market and to support the poverty alleviation scheme," said Narayan Bhushal, president of the district branch.

One of the successes of the project was that the government has invested one billion and private sector invested over 2 billion rupees. Deputy Director of the project Pushpa Raj Paudel holds the view that the project teaches us a lesson on how to improve livelihood of marginal and poor farmers working together with key players putting the farmers in the center. "From its inception in 2011 to now, one can see visible changes in the livelihood of people linking market, producer and technology," said Paudel. "This is a production focus project linking it with the market.”

RISAM has shown how livelihood of poor farmers can be improved by launching the project for backward and upward link. Implemented in 10 districts of Karnali, Province 5 and Sudurpashim in 2011 June, the project concluded on June 30, 2019. 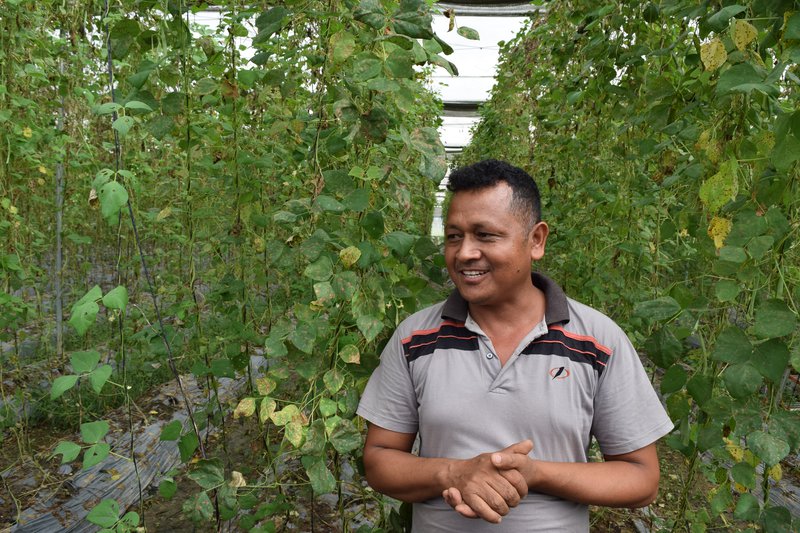 After the completion of the project, the farmers’ profit margin has increased up to 20 percent and the prices of the products have gone up to 15 percent. The project supported vegetables, seeds, fruit, potato, mushroom, honey and lentil and spice.

With a grant assistance of US$ 20.11 million from Asian Development Bank, the project covers agriculture, natural resources, and rural development, agro industry, marketing and trade.

The project reduced the market and business risks for small and medium farmers who diversified into high value commodities.

'"Before the implementation of the project, the market always fluctuated and farmers had to wait for a long time to receive payment. As it was linked with the value chain and market, everything has changed," said Poudel.

Marketing and Storing of Potato

With a cold storage facility, farmers, mostly indigenous Tharu of Lamahi Municipality, are doubling the profit from tomato production.

With the establishment of over 3400-ton capacity cold storage in Tilkulingadh 5 of Lamahi Municipality by Rapti Uddhyan Private Ltd, local farmers do not have to rush to sell potato in the season for a cheap price.

Being allowed to store the potato for a reasonable price, farmers are selling the potato when its prices go up. Purnima Chaudhary of Sagarmatha group planted potato in 18.5 bighas and produced over 25000 quintals of potato that she could store and sell.

"Some of the farmers have sold their potato and there are still14,000 quintals of potato in the storage. We are selling potato for Rs.40.00 per kilo, which used to be Rs.15. during the season," said Chaudhary. 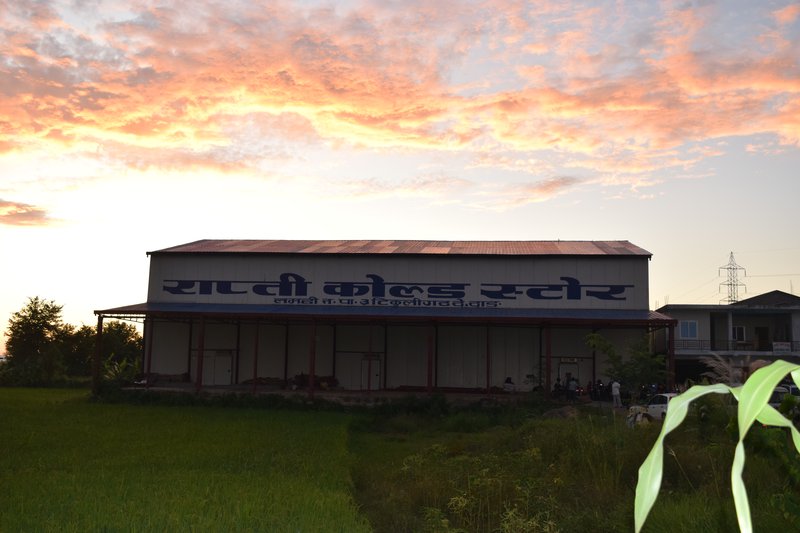 With the opening of cold storage, other farmers from nearby areas have also been storing the products. "Along with potato, we have storage of over 50 metric tons of apple," said Devan Jung Gurung.

Complementing the on-going initiatives in the rural sectors like irrigation, rural infrastructure, commercial agriculture and rural finance, the project also facilitated diversification and commercialization of agriculture in the region with the highest poverty level in Nepal. It also contributed to enhance food security and poverty reduction by supporting the transition of the rural poor and socially excluded groups from a largely subsistence economy to commercial one.

Giving Up To Leave UAE

Although he is recently dissatisfied with the income, owner of Shiva Shakti Krishi Farm of Ghorahi Sub-Metropolitan, Ward 3, Tharu decided to open a modern farm instead of going to work in over 50 degree Celsius temperature in United Arab Emirates.

Growing vegetable inside the net house, Tharu earned Rs.1507500.00, making a net profit of Rs. 929,000.00 in the first year. "The first year was comparatively good but now I have been facing the problems of the market where I am unable to compete with other farmers," said Tharu.

Established through the grant of Rs. 3111371.00 and his own Rs.25108943.00, the modern tunnel is one of the beauty of the project. "I don't have any complaint in the project but what I am worried about is the market where I have to compete with cheap and pesticide used vegetables."

Tharu is not alone to abandon the idea of going abroad for job. There are many farmers in the project area returning from the Gulf and India and making good income here. Fifty one year, Bishnu Oli, a bee producer from Tulsipur also abandoned the idea to go to India for work. With 250 bee hives, he has been making Rs.300,000 to Rs.400,000 a year.

"It is good to be with family and our colleagues in the village," said Oli. "I am happy here because there is a processing unit and market in Kathmandu.” 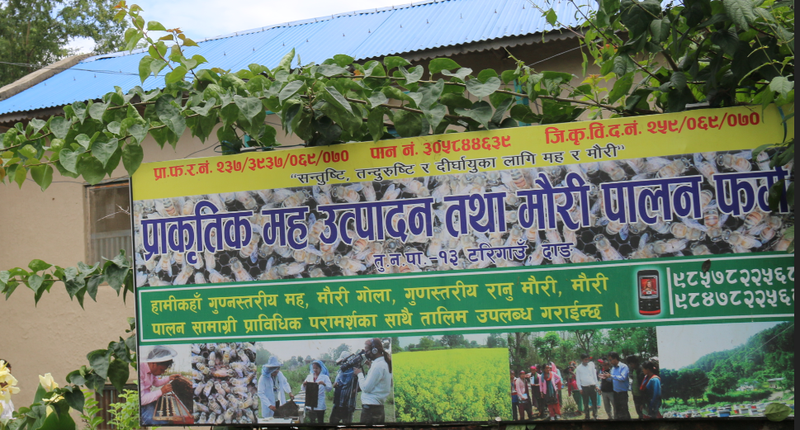 After the completion of the project, agriculture grant was awarded to 645 subprojects, competent 216, farmer group 280, agro-entrepreneurs 146.

Out of which 63 enterprises supported for high value processing, 25 female owned enterprises. At least 860 farmer groups with 21778 member households supported in HVC production, including land lease to fulfill the respective supply agreement between FG and HVC traders/ buyers.

With the grant support, 6739 members of farmers have been producing high value crop. This covers farm development, enterprise, market connection between producers and wholesaler, technology and new technology demonstration.

There is supply agreement between primary producer and post harvest actors between traders and processors through District Chamber Commerce and Industry.

Land management, agriculture and cooperative ministry has been formed in the province level and agriculture knowledge centers are created under the provincial ministry.

"The project has invested Rs.300,000.00 to Rs. 40 million per group or farmer depending on the project. Linking the project with market and value chain, the project is highly successful," said Rajan Acharya, Project Analyst of Asian Development Bank. "Since the project is targeted to poor and marginalized people, one can see the results of transformation there."

The project, with high participation of women, has encouraged women in cooperative and group formation. Dalits and indigenous people are the core part of the program. 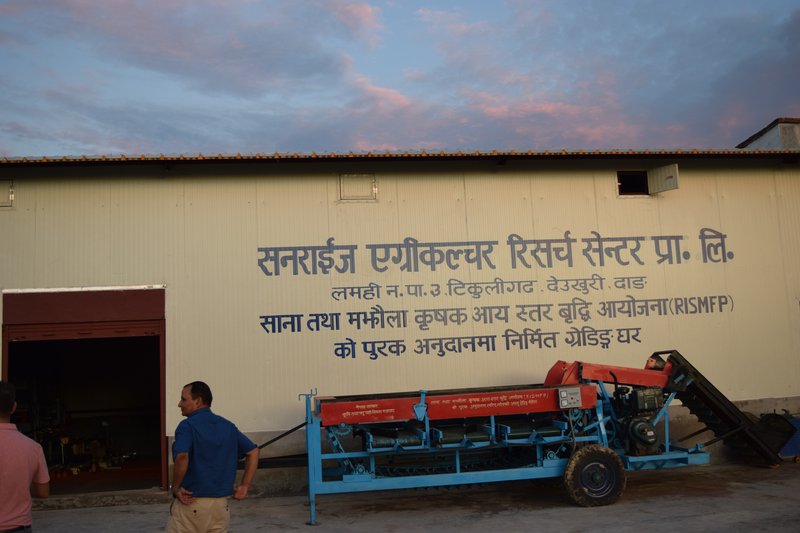 "As the project has been targeting poor, marginalized and vulnerable communities, the project meets the social safeguard. The project has social and environmental benefits as well," said Laxmi Subedi, senior Social Development Officer (Safeguard). 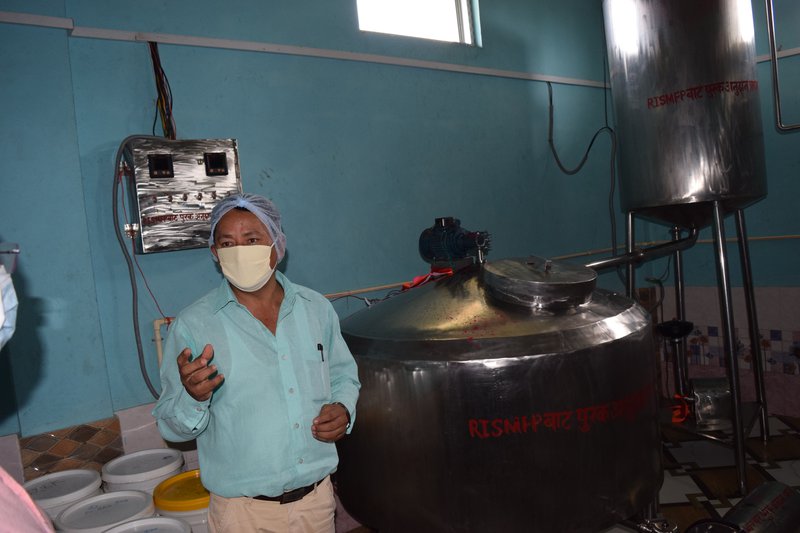 Along with bigger infrastructure projects like transmission, hydropower, airports and roads, Asian Development Bank has also shown sincerity to support uplifting the life of marginalized, poor and indigenous people. As the project has concluded, RISAM has shown a way out for small farmers to do well together.

Melamchi Water To Reach Kathmandu On Saturday, Urged Locals To Cautions By Agencies 57 minutes ago

PPE And Reproductive Health Kits Handed Over To Nepal By NEW SPOTLIGHT ONLINE 21 hours, 32 minutes ago