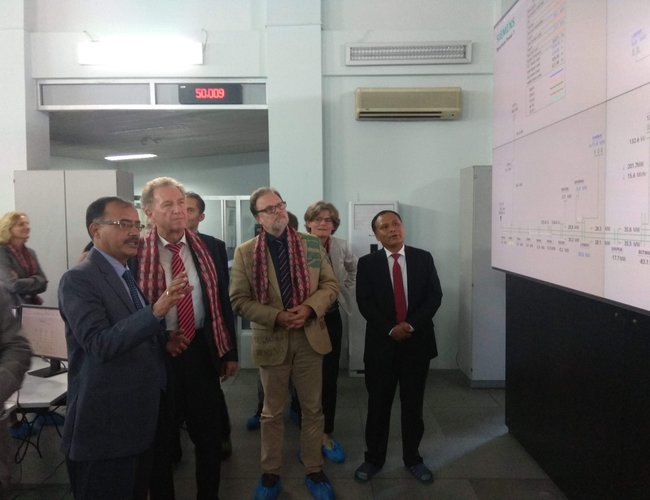 For the last three years, one of the major challenges for Managing Director of Nepal Electricity Authority Kul Man Ghising has been to manage the load of electricity during the peak times.

With mundane old Load Dispatch Center, MD Ghising needs himself to be present at the LDC when there are high demands of electricity in the country such as on the occasion of Deepawali.

With the inauguration of the new Load Center with most modern equipment and supervisory control and data acquisition (SCADA) system, MD Ghising's woe to manage load during the high demand comes to an end.

MD Ghising said that this system is a modern one and it helps to manage the power system very efficiently. “This system will also ensure efficiency and quality of energy,” said Ghising. “Now on, the supply of electricity, including the demand, can be managed with high efficiency from the center.”

Inaugurated jointly by Minister of Education and Science and Technology Giriraj Mani Pokharel and Norbert Barthle, Member of the German Parliament and Parliamentary State Secretary to the Federal Minister for Economic Cooperation and Development, the center is equipped with latest technology.

Based on (SCADA), which is an industrial control system used in many modern industries like energy, manufacturing, power, water transportation, the center will be capable to manage supply and demand in a more efficient way.

Inaugurating the center, Norbert Barthle said, “We are standing here at a very important place. The modernized load dispatch center that we are opening today is the heart of Nepal's power system. I should really say it is the brain of the system. The entire grid is controlled from this center!”

He said that the German government already supported the load dispatch center when it was first built in 2004. But control technologies have developed much further since then. That is why, in 2014, we committed 7 million Euros for the modernization of the center's hardware and software. During the big earthquake in 2015, transmission and distribution systems and the center itself were damaged.

“After all, this center is very important for Nepal's people and its economy. So I would like to express my deep respect for the hard work of the center's staff. Thanks to your work, power supply was restored just a few hours after the 2015 earthquake. The experience of the earthquake has shown very clearly that high-tech systems are very sensitive. So in regions that are prone to natural disasters, a backup system at a second site is absolutely vital.

"You are working for that by building the backup system for this center about 100 kilometers west of Kathmandu at Hetauda. Through this project, we are contributing to stable and sustainable power supplies and to Nepal's ambitious climate targets. First, the load dispatch center makes power synchronization possible, which is becoming more and more important. Second, such power synchronization is a technical precondition for selling power among countries in South Asia. Third, only about two-thirds of the population currently has access to power."

“Germany and Nepal have a long tradition of working together in the energy sector. During the 1980s and 1990s, we made big financial contributions to the large Lower and Middle Marsyangdi power stations. Now the focus of our cooperation has shifted from large-scale investments to renewable energy and energy efficiency as well as transmission infrastructure. Here, too, the goal of the German government is to contribute to poverty reduction, economic growth, and climate change mitigation. We, therefore, support, among other things, decentralized renewable energy, so that even people in remote regions – like those I met today in Dhading – will get access to power. Germany's involvement in the multi-donor Energising Development (EnDev) program, which provides loans for small hydro-power stations and grid expansion, serves the same goal. So I am pleased that we were able to commit another 6 million Euros in grant funding in 2019 for solar power, using funds from the German Climate Technology Initiative.”

Managing Director of NEA Kul Man Ghising said that he is feeling proud and happy for timely and successful completion of the up-gradation of the Load Dispatch Centre (LDC) which has been a key for the management while making a move from Load shedding to No-Load shedding era in the history of Nepali energy sector.

"I would like to thank my NEA team for all their effort in making this project a success. Special thanks go to the supplier, SEIMENS, and the consultant, Tractable, for their respective roles in this project."

Germany, the long-standing partner of Nepal, had financed the establishment of a full-fledged LDC earlier in 2003. And, now again, we have received the German financial assistance for strengthening, expanding and upgrading of the facilities from the earlier time. Moreover, today, the gracious presence of his Excellency the parliamentary state secretary from the Federal Ministry for Economic Cooperation and Development, BMZ Germany for the inauguration of this upgraded facility has reflected the German Government's high priority for the promotion of energy sector in Nepal," said MD Ghising.

"Like in Germany and other developed countries, the Government of Nepal has also considered energy as one of the keys to unlocking the development of this country. The white paper of the GoN in May 2018 has an ambitious target of generating 3,000 MW in 3 years; 5,000 MW in 5 years and 15,000 MW in 10 years. The government of Nepal has foreseen to achieve this target with an intervention from the government and also from private sectors. Besides Generation, challenges in front of NEA are expansion and up-gradation of Transmission and Distribution infrastructures for domestic supply and Cross broader Trade of electricity.

Looking at the scenario of the last three decades, Nepal has always been struggling to meet its domestic electricity demand. Even now the generation capacity of the domestic hydropower projects is not sufficient to meet the domestic demand in the dry season. Rather, we are relying on Indian import for managing our demand and supply for deficit times of the year. Coming to a brighter side of the story, now we have started talking about cross-border electricity trading for the export of electricity. Currently, Nepal has a total installed capacity of above 1,219 MW from both NEA and IPP owned Generation projects. However, we will be adding 1000 MW in the current fiscal year only. Hence, Nepal clearly sees an excess generation of power in the wet season within 1-2 years when the majority of the under-construction projects will be completed.

"I would like to take this opportunity today to thank again to the government of Germany and German people for their support towards Nepal and special thanks to the German Development Cooperation for timely and rightly identifying the need of this country and supporting the transmission line and distribution sectors. The Support of German government for lower and Middle Marsyangdi Hydro Electric projects in the earlier times were the right support at right times and similarly, the on-going support for Chilime-Trishuli and Lekhnath Damauli transmission lines together with the support for distribution network strengthening in few districts have been again the right support at right times. I would like to thank the support of the EU received through KFW for the distribution system projects in the transmission line corridor. I would also like to thank the Norwegian Government for their continued support to Nepal in the power sector."

On demand-side management, NEA is stepping for the actions for loss reduction, energy efficiency and working to promote other possible demand increasing actions like fuel switch and e-mobility to reduce the fossil fuel currently being imported. I believe the cooperation of Nepal and Germany in the future will also continue in the direction of our need and I am confident that NEA will always be trusted as a reliable partner for Germany to execute the energy projects in Nepal.

Whether it is in heritage preservation or technical training or hydro-electric sector, Federal Republic of Germany has been offering support to Nepal. The support given in these three sectors has contributed a lot to Nepal. 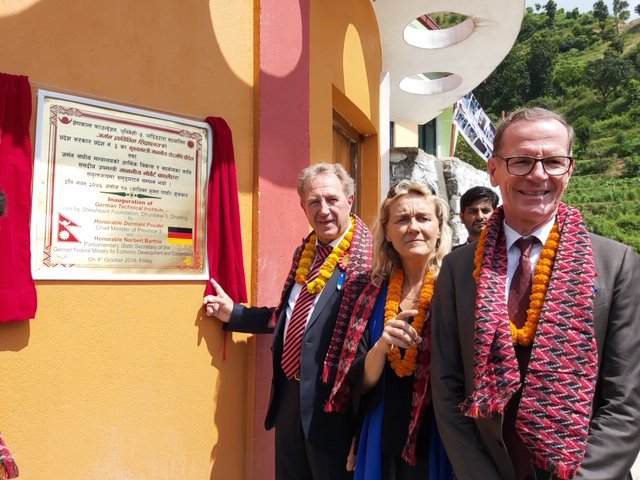 The metal workshop hall of the GTS has been constructed under the financial assistance of develoPPP.de program of the German Federal Ministry for Economic Cooperation and Development (BMZ) together with VOITH, the German Technology company based in Heidenheim. Different companies and individuals from the German region Swabian Alb have supported this project to ensure input from German Voith hydropower and other German firms.

"In Nepal, this project would be pioneer of sort, providing vocational training to youth in order to meet the high demand for professionals in the Nepalese hydro power sector. The school will train mechanics, metal workers and other future craftspeople in close collaboration with the hydropower industry of Nepal following a dual approach inspired by Germany’s vocational education and training system. GTS will provide short term courses (4-12 months) as well as long term courses (3 years diploma courses). Vocational Training has a long tradition in Germany," said German Minister.

Melamchi Water To Reach Kathmandu On Saturday, Urged Locals To Cautions By Agencies 13 hours, 46 minutes ago

PPE And Reproductive Health Kits Handed Over To Nepal By NEW SPOTLIGHT ONLINE 1 day, 10 hours ago