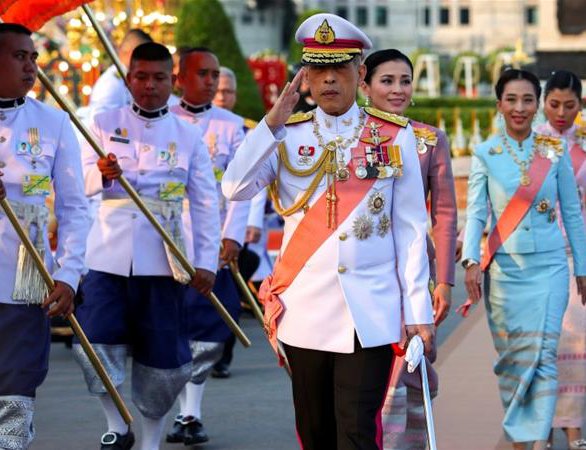 In one announcement, two palace officials, identified as bedroom guards, were fired for "extremely evil misconduct" and "adultery," which it said was a violation of a code of conduct for courtiers.

In another document, two military officers were fired for being "lax" in their duty as palace guards and "behaving unbecomingly of their ranks and titles."

The four were all stripped of their ranks and titles, the announcements said.

The four dismissals on Tuesday followed those of six palace officials last week, who were accused of severe disciplinary misconduct that caused harm to the royal service.

Since taking the throne in 2016, King Vajiralongkorn has taken more direct control of royal affairs and the crown's vast wealth, and transferred two military units from the army to his personal control.

She was accused of being "disloyal" and fomenting rivalry with Queen Suthida Bajrasudhabimalalakshana, who married King Vajiralongkorn in May just days before his coronation.

Thailand's royal family is protected by a lese majeste law that makes scrutiny of the monarchy or debate over its role almost impossible inside the kingdom.

The public is often able to glean clues to the inner workings of the palace through its use of symbolic imagery and the fates of royal aides.

The 67-year-old king came to power after the death of his father Bhumibol Adulyadej - who was widely revered by Thais and seen as a figure of moral authority.

The new king, a cycling and aviation enthusiast, is a more remote figure to many people, having spent much of his time abroad, particularly in Germany.