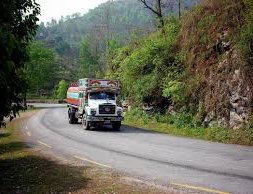 The Asian Development Bank (ADB) has approved a loan of $195 million to improve the highway section between Pokhara and Mugling, which links Pokhara to Kathmandu and to subregional corridors connecting Nepal with India and Bangladesh.

“The project will boost the traffic capacity, reliability, and safety of the main road link from Pokhara,” said ADB Transport Specialist Mr. Johan Georget. “The highway will be widened to four lanes, and this will reduce travel times, lower transport costs, and improve access to domestic markets, jobs, and social services. The upgraded highway will also open a wider gateway for Nepal to international markets, especially in India, and facilitate the arrivals of tourists to the region of Pokhara and its hinterland.”

Nepal’s economic growth improved to 7.3% a year on average between fiscal years (FY) 2017 and 2019, compared with about 3.3% in the previous three years. As a landlocked country, Nepal relies heavily on direct neighbors for international trade, mainly India, which traded 65% of Nepal’s imports and exports in FY2019. But while roads are the predominant mode of transport in Nepal for more than 90% of goods and passengers, the density and capacity of the road network remains low. This infrastructure deficiency hampers the economy, resulting in high operating costs and travel times, and impeding the development of competitive supply chains, tourism, and regional integration and trade.

The 200-kilometer (km) journey from Pokhara, a prime tourist destination at the foot of the Himalayas, to the Nepalese capital Kathmandu takes more than 5 hours by road. It is currently a two-lane highway that handles about 7,400 vehicles a day. As the number of vehicle registrations has been rising and total vehicles are expected to quadruple by 2029, upgrading national highways is a priority to support economic development.

Under this project, 81 km of the road will be widened to four lanes from Pokhara to Abukhaireni to meet increasing demand. Improvements will be made to the surfacing, structure, and drainage, with safety features such as crash barriers, and traffic and other warning light systems installed. A second 8-km section between Mugling and Abukhaireni will be considered for a subsequent project.

The road will be divided by a median, while service lanes in urban areas will improve safety, especially for pedestrians, bicycles, and motorcycle users. This is especially important since the country suffers a high rate of almost 16 deaths per 100,000 people due to traffic. Performance-based maintenance contracts of 5 years will strengthen road management and maintenance. The project will also install a landslide monitoring and management system to strengthen disaster resilience.

The total cost of the project is $254 million, of which the government will provide $59 million. The project is due for completion at the end of 2025.

Accompanying the loan is an ADB technical assistance grant of $500,000 to strengthen disaster risk reduction, landslide management, road safety, and procurement in the Ministry of Physical Infrastructure and Transport and Department of Roads.

UN Commences International Day of Commemoration In Memory Of The Victims Of The Holocaust By NEW SPOTLIGHT ONLINE 1 hour, 7 minutes ago