The Hedge Fund and Dollar PPA that this project signed with the Government of Nepal may become templates for other privately funded foreign hydropower projects. 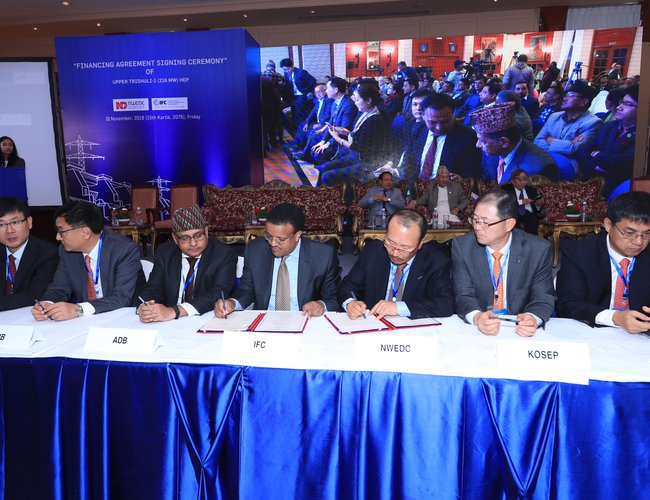 I am immensely happy to be here today for the Financial Agreement signing ceremony of Upper Trishuli 1 Project. It has been a long journey to bring this project at this stage, and I hope from now on there will be a speedy implementation of this project. This project has many benefits.

First, Roads that have been built for this project will benefit the local people of Rasuwa district. It will help enhancing connectivity between Tibet Border and Kathmandu.

Second, this is a privately funded project. This is a consortium of many companies. Korean South East Power Company Limited is leading the consortium. Many foreign investors are looking at this project as a litmus test for whether a foreign private funded project will work in Nepal or not. There were many issues which this project faced like ‘Hedge Fund’ and ‘Dollar PPA’, which have been addressed by the Nepali Government. The Hedge Fund and Dollar PPA that this project signed with the Government of Nepal may become templates for other privately funded foreign hydropower projects. Since Nepal does not have an international credit rating, it was extremely difficult for the Korean developers to find sources of loans, but they found a solution. And I hope that other foreign developers will be able to find sources of loans similarly. But in order for that to happen, this project must succeed and be a shining example.

Third, if this project succeeds, then it may help in fulfilling SDG Goals by encouraging more private investment not only in hydropower but in other infrastructure sectors. Nepal has goals like reducing use of firewood as a primary fuel for cooking up to 10% of households, generation of 15,000MW of electricity, use of electric vehicles for public transport and so on.

Foreign Direct Investment (FDI) and Nepali private sector investment will be the major source of funding for infrastructure projects in fulfilling SDG Goals because foreign grant and loans are still very low and Nepali domestic resources are not enough. As I stated earlier, investors will look for success stories, and Upper Trishuli 1 could be an ideal example.

In my opinion, hydropower sector in Nepal still is not big enough to satisfy the demand of the country. In NEA’s own report, it states that the total per capita consumption of energy in Nepal in 2018/19 fiscal year was 245 units. The Government wants to increase this to 700 units by 2022. In my opinion, this rate of consumption is still extremely low for the development of Nepal, especially if we compare to other neighboring countries. I think that the demand for electricity in Nepal will increase sharply when people start using electric vehicles, fans, electricity for cooking and so on. Therefore, private investment would become the driving force in meeting the increasing demand for electricity. Lastly, as I have already stated, speedy completion of this project will be very important because people will be watching.

Park Yong- Sik is the Ambassador of South Korea for Nepal. Excerpts of the statement delivered at Financial Closure Ceremony Today.