The celebration of Chhath puja may predate to ancient Vedas, as the rituals performed during the puja are similar to the ones mentioned in Rig Veda, in which the Sun god is worshipped. 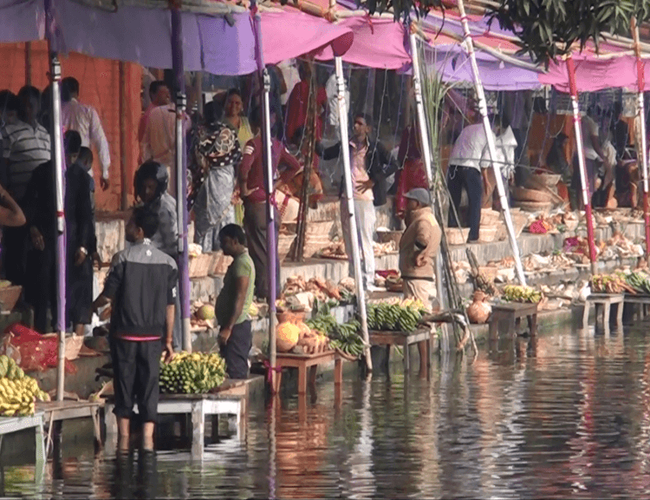 Chhath Puja is an important Hindu festival that is mainly celebrated in Bihar and some regions of Nepal. The puja is dedicated to the worship of the Sun god and his wife Usha. During the occasion, devotees perform puja to thank god for supporting life on earth and seek the divine couple’s blessing. However, Chhath – the main day – isn’t the first day but the third day of the puja and, this year it will be celebrated on November 2.

According to Hindu religion, the Sun is believed to heal many severe health conditions and ensure longevity, prosperity, progress and well-being. People celebrate the festival by following a rigorous routine that lasts four days. The rituals include: fasting (including abstinence from drinking water), holy bathing, offering prayers to the rising and setting sun, and meditating by standing in water.

In addition to Nepal, many other Indian states such as Bihar, Jharkhand, eastern UP, Madhya Pradesh, Uttar Pradesh, Gujarat, Bangalore, Chandigarh, Chhattisgarh also celebrate the festival with great fervour.

Chhath Puja is so called as it is celebrated on the sixth day of the month of Karthika in the Vikram Samvat. It is also celebrated in the summers, some days after Holi. However, Karthika month’s Chhath is more ardently followed by people.

It is believed that the celebration of Chhath puja may predate to the ancient Vedas, as the rituals performed during the puja are similar to the ones mentioned in Rig Veda, in which the Sun god is worshipped. At the time, the rishis (sages) were also known to worship the Sun and remain without intake of good as they would obtain their energy directly from the sun. However, another significance of the puja is attached to the story of Lord Rama.

According to ancient texts, Rama and his wife Sita had kept fast and offered prayers to the Sun god, in the month of Kartika in Shukla Paksh, once they returned to the Ayodhya after 14 years of exile. From then on, the Chhath Puja became a significant and traditional Hindu festival, which is celebrated with zeal and zest every year.

The four-day festival starts four days after Diwali. This is how the devotees observe the festival.

Nahay Khay: The first day of Chhath Puja, devotees take a dip, preferably in the Kosi river, Karnali and Ganga, and carry home the holy water to prepare the offerings.

Lohanda: The second day, the devotees observe a fast for the whole day, which ends in the evening a little after sunset. After worshipping the Sun and the Moon, they prepare offerings of kheer, bananas and rice for their family. After consuming the offering, they fast for 36 hours without water.

Usha Arghya: The fourth day, devotees go to the holy waters and offer morning offerings or ‘Usha arghya’ to the sun, following which they break their fast.

Devotees during this period observe purity and live frugally. They sleep on the floor on a single blanket. The main festival is commemorated on the third day of Chhath, when the Sun god is offered Surya Namaskar and fruits.

Gita Jayanti 2020: Significance And Importance Of This Special Festival By NEW SPOTLIGHT ONLINE 3 weeks, 4 days ago