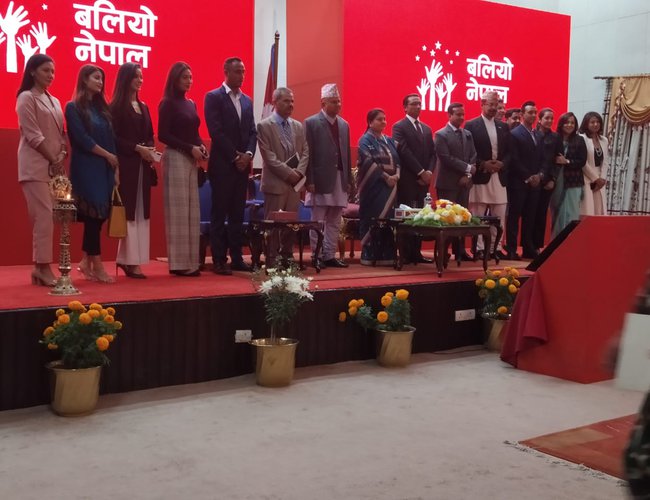 The project seeks to mobilize the private sector and civil society to support Nepal’s efforts at reducing chronic malnutrition in the country.

“The whole emphasis of the initiative is to bring a novel demand and supply approach involving citizens and private sector to help ongoing government initiatives in the stubborn fight against malnutrition,” says Dr Swarnim Wagle, who chairs the five-member independent board of Baliyo Nepal. The other members are businessman Nirvana Chaudhary, Nabil Bank CEO Anil Shah, cricketer Paras Khadka and Dr Uma Koirala. Likewise, nutritionist Dr Aruna Upreti is the advisor.

According to a press release issued by Chaudhary Foundation, the organization will collaborate with the food industry to increase the supply of affordable and nutritious food and generate the demand for these products through social marketing and behavior change interventions.

In its first year, the organization is partnering with four private companies – Shreenagar Agro Farms, Avinash, Bhuramal Lunkarandas Conglomerate (BLC) and Dugar. The organization seeks to promote the consumption of eggs and fortified porridge and increase the accessibility of those products. BLC & Dugar will launch the first individual affordable single-serve sachets of fortified porridge in Nepal, beginning in December in Province 5, according to Baliyo Nepal.

Addressing the campaign, Dr. Wagle said that the organization is developing a range of interventions to improve food habits, with a focus on lower-income adolescent girls, women of reproductive age and children from 6 to 23 months.

With a special initiative of Chairman of Chaudhary Group and Chaudhary Foundation Binod Kumar Chaudhary, the project is implemented in Nepal

Chairman Chaudhary supported implementing the project in Nepal with the collaboration of Bill & Melinda Gates Foundation. Our children are the country’s future. Our prime responsibility now is to mentally and physically strengthen these children,” said Chaudhary. “In this regard, the project will be game-changer in harnessing the best of the private sector in the global fight against malnutrition.”

Supported by A Bill & Melinda Gates Foundation under which Chaudhary Foundation, a social initiative of the Chaudhary Group, has secured a grant of US$788,192 in October last year to launch, develop and scale-up Baliyo Nepal.

In the first phase, the program is implemented in Province 5. Chief Minister of Province 5, Shanker Pokharel expressed happiness over the selection of his province for the project.

Vice-chairman of National Planning Commission Dr. Pushpa Kandel expressed happiness over the involvement of the private sector in this campaign.

Vice President of the Confederation of Nepalese Industry Nirvana Chaudhary highlighted the efforts made by the foundation in the last two years. He said that this campaign will be directed purely to upscale nutrition to children of Nepal and it has nothing to do with promoting CG Brands.

With a slogan of "Nourishing people and planet together, SUN Global gathering 2019 is going to be held in Nepal from 4-7 November.

The SUN Global Gathering brings together all SUN Government Focal Points and representatives of their partners from civil society, donors, United Nations agencies, private sector partners, academia, media, parliamentarians, and others. It is the flagship event of the SUN Movement and an important moment where members take stock of progress and challenges, share their innovations and learn what is helping to reduce malnutrition across all SUN Countries. It is a moment for every actor to be energized and encouraged through sharing, learning and finding ways to take their fight against malnutrition to the next level.

As in previous years, the SUN Global Gathering will be divided into several sections including plenary sessions, workshops, and a marketplace designed to showcase country experiences in scaling up nutrition. This year, we are also planning plenty of space (and support) where participants will have the opportunity to share their unique experiences and perspectives.

The United States In Partnership With ADB Completes Two Secondary Schools In Kathmandu By NEW SPOTLIGHT ONLINE 11 hours, 10 minutes ago

India Provides Grant For The Construction Of New School Building In Butwal By NEW SPOTLIGHT ONLINE 3 days, 5 hours ago