The Russian Federation has an important role to play in contemporary international affairs, particularly for the global peace and stability, as well as in promoting collective interests of the developing world 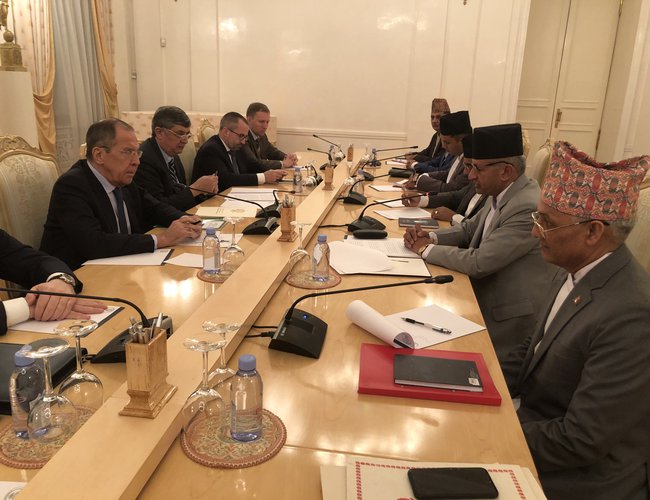 After a long gap, bilateral talks have been held at the foreign minister’s level. It was our heavy domestic engagements due to the political transition that kept us busy.

This visit has taken place in the fundamentally changed national context. The prolonged political transition in Nepal has ended and we have moved from the state of instability to stability. Our national focus is on socio-economic transformation in a rapid but sustainable manner.

The people have high hope on the Government—a stable government that is in place in two decades. The present government is committed to deliver on its promises to people under the national aspiration of ‘prosperous Nepal, happy Nepali’.

I think this is the most appropriate time that we can work together in the interest of the peoples of both the countries. I therefore thank Minister Lavrov for welcoming my delegation at this important juncture.

Foreign Minister Lavrov and I exchanged substantive views on a wide range of topics today in a very cordial and frank atmosphere. I have handed over the separate invitations from President of Nepal and Prime Minister of Nepal to the President Putin and Prime Minister Medvedev respectively to visit Nepal at their convenience. I have also invited Foreign Minister Lavrov to pay a visit to Nepal, which is long overdue.

I believe Nepal-Russia relations deserve this and more so in the changed context. I believe that high level exchanges between the two countries will be instrumental in taking our relations to a new height.

The Russian Federation has an important role to play in contemporary international affairs, particularly for the global peace and stability, as well as in promoting collective interests of the developing world.

I am very happy to work closely with Minister Lavrov. He isnot only a seasoned diplomat, but also a well-respected political figure of our time for the stewardship he has provided to the Russian Foreign Ministry for a long time. I am happy to note his particular interest in and profound knowledge about South Asia.

Nepal and Russia have many areas of common interests to work together. We have been working closely at bilateral, regional and multilateral levels towards further strengthening friendly relations for the mutual benefits of the two countries and for global peace, security and stability.

There are many areas of cooperation that can be harnessed for common benefits. Promotion of trade and investment in energy, industrial and infrastructure development are one of them, where Russia has developed a world-class expertise.

Nepal has huge potentials to develop organic agro-products such as tea, coffee, ginger, cardamom which can be exported to Russia. I also believe that Russian people love Nepali handmade woolen carpets and handicrafts of various kinds.We can also import goods from Russia.

Nepal is an attractive destination for foreign investment. We have created a sound regulatory framework for the protection of investment together with the guarantee of incentives that also include repatriation of capital and profit without any hassles. One stop service has been in operation to provide one window and fast track service to foreign investors. We invite Russian investment both public and private in productive sectors of our economy. Hydropower, tourism, agriculture, minerals, mines, IT are some of the sectors in which investment is highly profitable.

Minister Lavrov and I discussed our bilateral cooperation, engagements at these platforms, as well as the ways and means for enhancing economic and trade relations.

The people of Nepal are thankful for the cooperation they received from the Russian Federation: in the 2015 earthquake; for infrastructure development; in human resource development; or during the early stage of industrial development in Nepal.

People-to-people relations have been phenomenal. Having interest in literature, I have deep respect for Russian literary icons Leo Tolstoy, Anton Chekhov, Maxim Gorky, Alexander Pushkin etc. It is equally so among many Nepalis.

A growing number of Russians have attraction towards eastern philosophies including Buddhism. Likewise, Nepali people are attracted to the glorious history, diverse culture, literature and arts of Russia. Against this background, Minister Lavrov and I have agreed to further enhancing the level of cultural cooperation and people to people exchange.

At regional and international contexts, we have shared our thoughts at length. Nepal stands for multilateralism, so does the Russian Federation.The UN and other multilateral forums are the hard-own institutions of our collective efforts. These institutions should be preserved for the collective benefit of humanity.

Russia is playing an active role in various global agendas such as cyber security, counterterrorism, peacekeeping, mediation and strengthening of international rule of law. These are important initiatives for peace and security.

Minister Lavrov and I are on the same page that we should strive for preserving the multilateralism for the collective benefit of the international community.

Let me also briefly highlight Nepal’s foreign policy priorities. Nepal values cooperation with all the countries based on the principle of “Amity with All and Enmity with None”. As with other countries, Nepal also gives priority to its relationship with the immediate neighbors. Major powers like Russia, development partners and other friendly countries are also in priority in our foreign policy orientation.

Nepal is committed to not let its territory to be used against any friendly nation in the world. Non-Alignment, the Panchasheel or the five principle of Peaceful Coexistence, respect for international law, value for world peace continue to guide our conduct of foreign policy. Respect for the sovereignty, territorial integrity, independence and non-interference in the domestic affairs of other countries are the fundamentals tenets of healthyinternational relations.

South Asia is a region full of potentials, diversity and challenges. We are committed to engage with friendly countries in the region and beyond on areas of cooperation in the collective interest of the region. Nepal believes that all differences must be settled through peaceful means. Regional cooperation has great potentials to contribute to shared prosperity, peace and stability. Bearing this in mind, we have been playing an active role in reactivating SAARC as its current Chair and revitalizing BIMSTEC as a bridge between South Asia and South-east Asia.

Nepal is also engaged in the Shanghai Cooperation Organization since 2015 as dialogue partner. The framework for the deeper engagement of Nepal with SCO is wide. We believe that our partnership can be upgrade to a full membership. We need support from SCO member States including Russia.

Nepal has established a permanent dialogue forum known as Sagarmatha Sambaad (Mt Everest Dialogue named after the tallest peak on earth) to deliberate on contemporary issues of global, regional and national significance. The first episode of the Sambaad will be held on the theme ‘Climate Change, Mountains and Future of Humanity’ to sensitize the international community about the impending climate crisis and its consequences of humanity. We are expecting high-level participation from a host of countries including the Russian Federation.

Let me take this opportunity to inform you that Visit Nepal Year is being celebrated throughout the year 2020 Nepal. I extend to you all my invitation to come to Nepal at your convenient time. Nepal is a beautiful country and has many things to offer both naturally and culturally.

I quote the famous poet Rasul Gamzatov, who described Nepal as ‘diamond yet to be crafted’. This is a must-visit destination in one’s lifetime. I would expect that this message gets across Russia and beyond through appropriate publicity in this great friendly nation.

Nepal Is Committed To End All Kinds Of Discrimination: Foreign Minister Gyawali By Agencies 3 days, 15 hours ago