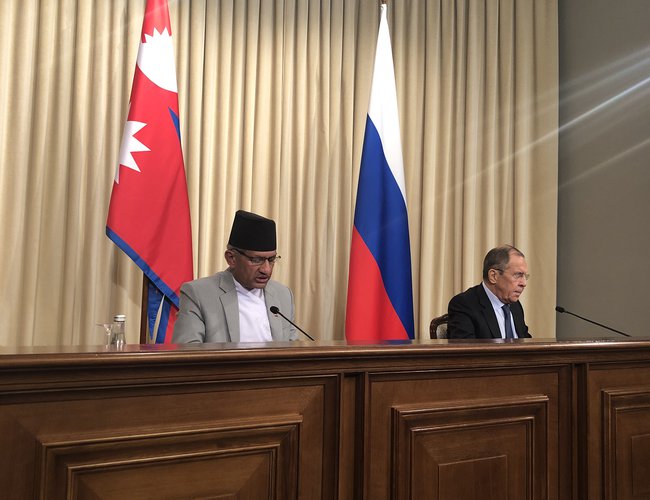 Foreign Minister Pradeep Kumar Gyawali stated that this visit was an indication of the importance of Nepal attached to its friendship with the Russian Federation, particularly in the fundamentally changed national context.

Foreign Minister Gyawali held delegation-level talks with Sergey Lavrov, Foreign Minister of the Russian Federation, in Moscow. The bilateral meeting was held in a cordial atmosphere.

The two Ministers exchanged views on various aspects of bilateral relations. They underscored the importance of the exchange of high-level visits, including the judicial, parliamentary and business exchanges. Minister Gyawali handed over the invitation of the President of Nepal to the President of the Russian Federation to pay a state visit to Nepal. He also handed over the invitation of the Prime Minister of Nepal to the Prime Minister of the Russian Federation.

The Ministers agreed to harness the immense potentials to enlarge the scope and enrich the substance of bilateral cooperation especially in the areas of investment, trade, tourism, education, energy, infrastructure development, and culture and people-to-people relations.

The two sides underlined the need for building a strong economic partnership commensurate with the bond of friendship they have been cherishing since the establishment of diplomatic relations in 1956. They agreed to explore ways and means for enhancing economic and trade relations for mutual benefit. Through his Russian counterpart, Minister Gyawali encouraged Russian entrepreneurs to invest in Nepal in view of an investment-friendly environment.

Nepal acknowledged with thanks the Russian cooperation in many areas, ranging from post-disaster support of 2015 to human resource development, infrastructure development to cultural cooperation. In the context of Visit Nepal Year 2020, Nepal also invited more Russian visitors to Nepal.

The two leaders also shared their perspectives on important global agendas, including maintenance of international peace and security, disarmament and peacekeeping. They expressed their commitment to multilateralism and the centrality of the United Nations to deal with international issues. Minister Gyawali, stating that the agenda of climate change is high on the agenda of both the countries, invited minister Lavrov to participate in the Sagarmatha Sambaad to be held in Kathmandu in April 2020.

The two Ministers also shared their views on regional cooperation. Nepal is currently a ‘dialogue partner’ of the Shanghai Cooperation Organization and hopes to connect with Central Asia and beyond through its framework of cooperation. The Russian Federation, as the Organization’s founding member, expressed its readiness to extend cooperation within the scope of the organization. 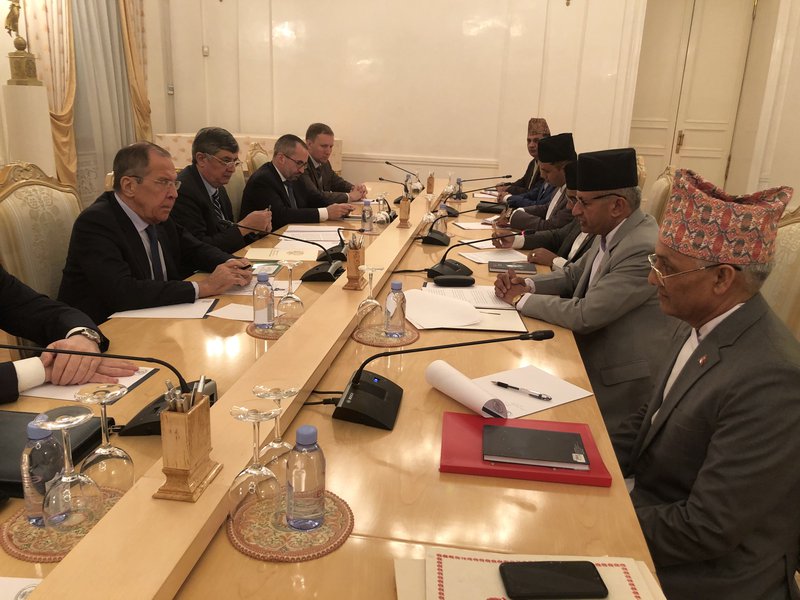 Following the official talks, the two Ministers briefed the media on major highlights and outcomes of the meeting as well as on their priorities ahead. The questions raised by journalists after the media briefing were fielded by the Ministers.

Minister Lavrov hosted an official luncheon in honor of Minister Gyawali and his delegation.

Minister Gyawali arrived in Moscow yesterday. In the evening yesterday, the Non-Resident Nepali Association, Russia organized a reception to welcome the Nepali delegation.

Speaking with NRNA representatives, Minister Gyawali appreciated the active role being played by the Nepali diaspora in Russia for the promotion of trade, investment and people to people exchange.

He is scheduled to address the Institute of International Relations in Moscow on Nepal-Russia relations and cooperation tomorrow.

Nepal Requested India For The Supply Of COVID-19 Vaccines To Continue Administering The Second Dose By NEW SPOTLIGHT ONLINE 9 hours, 44 minutes ago