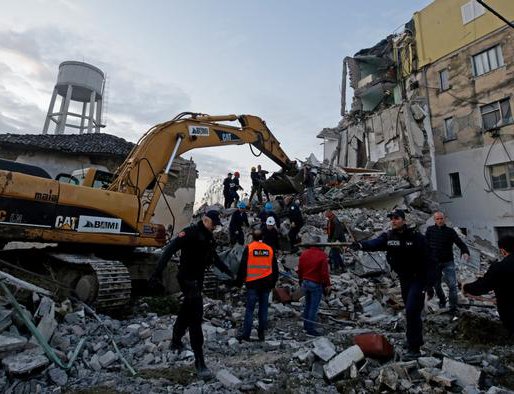 At least six people have died after the most powerful earthquake to hit Albania in decades rocked the capital of Tirana and surrounding region early on Tuesday, causing several buildings to collapse and burying residents in the rubble.

Two women were found in the rubble of an apartment building in the northern village of Thumane, and a man died in the town of Kurbin after panicking and jumping out of a building, a Defense Ministry spokeswoman said.

The bodies of three other victims were pulled from the wreckage of two collapsed buildings in Durres, the defense ministry said.

Emergency workers told local media one of those killed was an elderly woman who had managed to save her grandson by cradling him with her body.

Unverified video footage posted on social media showed what appeared to be a collapsed building in Durres, 40 km west of Tirana, on the Adriatic coast. Other footage showed buildings with large cracks and fallen masonry, including one apartment with most of a bedroom wall missing.

National police said people in Durres and the surrounding areas to avoid driving so emergency services could reach those affected by the earthquake.

Elections Is Just A Month Away: Alliance Is Making Is Making By Agencies 1 day, 4 hours ago