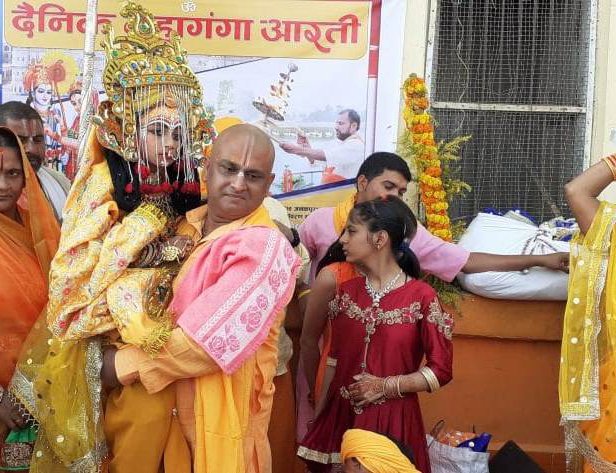 Today is Bivah Panchami. Janakpur is observing the Bivah Panchami organizing various programs commemorating the marriage between Lord Rama and Sita. The day is of great importance at Janakpurdham in Nepal, where thousands of pilgrims arrive many from India and from other part of the country, as it is believed that Sita married Lord Ram (Prince of Ayodhya) here.

Bivah Panchami is celebrated to mark the marriage of Lord Ram and Sita as all the people of the Hindu world know the story of the marriage of the Ram and the princess Sita, as told in the epic Ramayana.

Bivah Panchami is a festival celebrating the wedding of Rama and Sita. It is observed on the fifth day of the Shukla paksha or waxing phase of moon in the Agrahayana month (November – December) as per Maithili calendar. The day is observed as the Bivah Utsav of Sita and Rama in temples and sacred places associated with Sri Rama in Mithila region of Nepal and India.

King Janak, Sita’s father, proposed a test of strength for the suitors of his daughter: to string the great bow of Lord Shiva. Warriors, kins and chieftains came from afar, but no man could even lift the bow. Ram lifted the bow with ease and when he tried to string it, the bow shattered into pieces.

Ram and Sita were married in Janakpur, now in southern Nepal, and their marriage is celebrated to this day. Each year, idols of Ram and Sita are brought out in procession and their Hindu wedding ceremony is re-enacted during a weeklong religious fair. Bibah Panchami reflects the devotion of Hindus to Ram, perhaps the most popular among the incarnations of Vishnu, and to Sita, the model of the ideal Hindu woman.

Swasthanibrathakatha To Conclude Today By Agencies 3 days, 2 hours ago