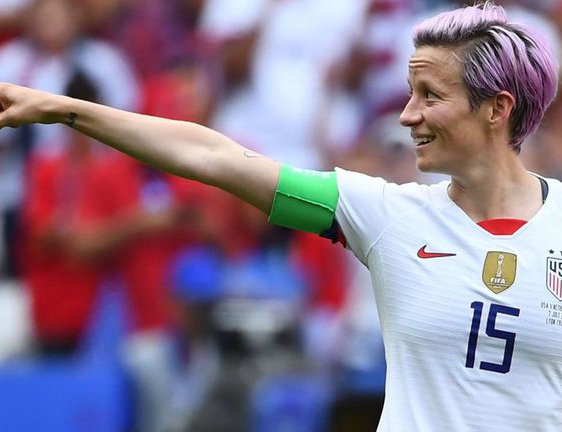 Megan Rapinoe of the United States has won Women's Ballon d'Or for 2019, with England's Lucy Bronze the runner-up.

Winger Rapinoe, 34, co-captained the US to victory at this summer's World Cup, where she was named player of the tournament and finished joint-top scorer with six goals.

Bronze, 28, the Uefa Women's Player of the Year, played a key part in England's run to the semi-finals. Rapinoe's compatriot Alex Morgan came third in the Ballon d'Or ranking.

Lyon striker Ada Hegerberg, who became the first winner of the women's version of the award last year, finished fourth, while Arsenal and Netherlands forward Vivianne Miedema rounded out the top five.

The men's award was won by Argentina and Barcelona's Lionel Messi for a record sixth time.

Rapinoe, who was not in attendance at the awards ceremony, said in a recorded message: "I'm so sad I can't make it tonight. It's absolutely incredible, congrats to the other nominees.

"I can't believe I'm the one winning in this field, it's been an incredible year. I want to thank my team-mates and the US federation."

'If every player isn't outraged by racism, they are part of the problem'

Rapinoe has had a memorable 2019, becoming a global star for her performances during the World Cup but also for her willingness to use the spotlight to speak out on causes such as LGBTQ+ rights and equal pay.

She also made headlines after saying she would refuse to visit the White House if the US won the World Cup and joined the national team squad in suing their federation over equal pay.

After winning the women's award at the Best Fifa Football Awards in September, she was the favourite to become the second ever recipient of the Women's Ballon d'Or.

Tiger Woods Seriously Injured In A Car Accident By Agencies 2 days, 23 hours ago