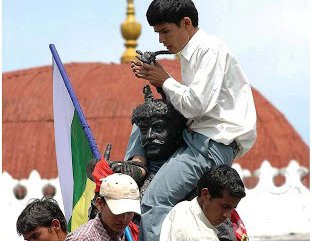 The epoch we are living through, internationally and nationally, might well be called the Age of Fraying Political Narratives: long held beliefs that pointed to how we should view the world and the myriad relations therein are coming apart at the seams, and it is an unsettling sight. A term out of the humanities, dictionaries define a narrative as "a particular way of explaining or understanding events". It provides a way of presenting a situation through a descriptive storytelling lens with a particular set of values underlying it, which then shapes the way people and countries respond to events. When those values no longer command undisputed allegiance, in other words when their hegemony is no longer unquestioned, a narrative's capacity to convince fades away as its storyline begins to elicit ridicule and not reverence.

Writing recently in the Washington Examiner, Georgia University professor Edward Halper argues that standard narratives that underlay American political beliefs have become dead ends of scripted canonical beliefs obscuring real issues, leading to finger-pointing with broad-brush labeling as "progressive" or "racist" etc., and preventing meaningful political discourse. He was writing about internal American politics, but the issues he raises have equal if not more relevance for global politics dominated as they have been for the last seven decades by the Anglo-Saxon, specifically Pax Americana narrative. It reached its apogee in the 1990s with the unipolar world created after the collapse of the Berlin Wall but it was soon consumed by its own hubris that led to disastrous wars and regime-change interventions abroad, and financial shenanigans at home that led to the 2008 collapse. Invariably, other power centers re-emerged, notably China, Russia and regional powers such as India, South Africa and others who are adding a cacophony of narratives that challenge the dominance of long-held Western narratives, including defying the Pax Americana financial hegemony.

First, there were glaring contradictions in the Western narratives. If they were all about democracy, rule of law and human dignity, why were they so supportive, since the 1950s and the very beginning of Pax Americana domination, of dictators and their atrocities from Korea and the Philippines to Iran, Middle-East and Latin America? Just because, in Franklin Roosevelt's memorable words, "they were sons of bitches but they were our sons of bitches"? Those of my generation were weaned on the belief that British parliamentary Westminster model and American democracy were the highest standards of global governance. If those standards can only produce a Boris Johnson or a Donald Trump; if their regime change efforts is really about the control of strategic natural resources (in Syria it is about the control of oil to benefit their local mercenaries, in Bolivia it is to control thirty percent of the world's Lithium reserves, and a similar logic is behind the attempt by Trump to buy Greenland off their Danish allies); if their financial centers in London and New York serve as the biggest global money laundering centers for oligarchs and autocrats everywhere; who will buy their narrative of democracy, justice, human dignity and "zero tolerance for corruption"? That questioning, and the political churning it is demanding, is what we are currently undergoing in the Global South.

And nowhere is this more pronounced than in South Asia, Nepal in particular. Democracy has lost its sheen, but not the stranglehold of its hegemonic narrative, when all that it has produced is blatant corruption. In the words of the ex-Maoist political commentator Bharat Dahal, Loktantra and its main parties have become factories producing corruption and criminality. If the Speaker of the Parliament is in jail for raping a colleague; if the main opposition party's senior MP is also in jail for burning alive in a brick kiln a dozen of his own party cadres (injured in a bomb blast he was orchestrating to disrupt elections with booth capturing) rather than incur the costs of treating them; when scandal after scandal unfolds with impunity enmeshing highest leadership of all main parties; when Nepalis suffer the highest taxation rates in history not for any good national cause but just to provide perks and privileges to myriad corrupt and incompetent party cadres, why, ask many who hitherto bought the democracy narrative, do we need it?

With this kind of skepticism about conventional political wisdom on the rise, many other shibboleths, especially of the 2005/2006 regime change are beginning to sound hollow to Nepalis at large. First among them is that the King was an autocrat but Maoist and the Seven (dwarf) Parties (SPAM) were democrats. With estimated several billion from Western and Mughlani "democracy" projects spent in advertising that fake line, Nepali masses can be forgiven for believing it. Now they have questions. How was a King who asked for elections to bring 1990 constitution (derailed by Kangress infighting and Maoist insurgency) back on track an autocract; but how were parliamentary parties that then refused to hold elections unless they controlled home and finance ministries (to – you guessed it – corrupt the voting process) democrats? And if the King was an autocrat, why did he relinquish power so calmly and peacefully? It is because this "autocratic king" narrative peddled by the parliamentary parties and Mughlani/Western interests is so patently false that republicanism in Nepal totters when the King spends time with family, dancing in a restaurant!

Second is the narrative that the King being forced to re-instate the 1998 parliament (dissolved by Nepali Kangress infighting and whose 5-year people-given mandate had long run out) was a democratic restoration. It was nothing of the sort: it was merely bringing back the very same people who had looted the country in the 1990s to do so again from 2006 with the backing of foreign interests. The first act of this illegitimate body was to violate, debase and ultimately trample out the very 1990 constitution they had taken an oath to protect. It added an extra third of its members people who did not win elections, had never eschewed violence as a political tool and never recanted saying that the parliament as a "butcher's shop displaying a goat's head and selling dog's meat". Indeed, the Maoists entered, in their words, the "parliamentary quagmire" to enrich themselves and their families and practice rampant crony capitalism as if there was no tomorrow. And that dishonest politics has now continued into today's sad state of the country with the debasing the 2015 constitution as well when it comes to federalism or anti-corruption transparency.

There are many such narratives of Loktantra that in real practice are subverting genuine democracy with their canonical blindness, which are thankfully crumbling in the eyes of an increasingly skeptical Nepali public. The question is, at a minimum, how can reforms even begin with the current crop of failed politicians in power, and if that is a non-starter, what will replace it? In February 2006, I published an article ("Nepal’s Intertwined Politics of the Wax, Wick and Flame") in a now defunct website called nepaleyes and reprinted in Peoples' Review. Using a syncretic mixture of Cultural Theory's plural forms of power and Samkhya philosophy's Wax-Wick-Flame imagery, I argued that we need to distinguish between actors and their actual power which is of three types: tamasic (raw, coercive), rajasic (organizational, persuasive) and satwick (critical, moral). The three primary actors then were the King, the parliamentary Seven Parties and the Maoists, with international players cajoling, bribing and threatening them in varied measures. Each enjoyed the three powers to varying degrees, but when an alliance of two of them (SPAM) was cobbled, Nepal's politics eventually became morally lame, to be met with fatal consequences which we are experiencing today.

Political power has coercive and persuasive elements but without a strong bedrock of moral legitimacy, the other two cannot hold, as the experiences of Gandhi and the British Raj or Sakharov and Sovietsky Vlast have demonstrated in recent times. Strangely, that article was totally ignored in Nepal, such was the myopic and euphoric mood during the 2006 regime change; but it was quoted in two interesting places: in a book by East Anglia professor Mark Zeitoun called Power and Water in the Middle East: The Hidden Politics of the Palestinian-Israeli Water Conflict and in an Australian National University PhD thesis on Deliberative Water Governance by John Dore. Small consolation for a prophet not listened to in his own land, but the basic arguments made in it point to the evolution ahead as this 2006 dispensation putters to an ignominious end. In Loktantrick Nepal, cunning alliances for electoral capture may bring a party to Singha Durbar but lacking critical moral power, it will be a fleeting historical footnote, especially in these globally turbulent, epoch changing times.

Nepal And The EU Share 20 Years History Of Partnership On Education By Jutta Urpilainen 8 hours, 50 minutes ago

Be Works By Hemang Dixit 9 hours, 51 minutes ago