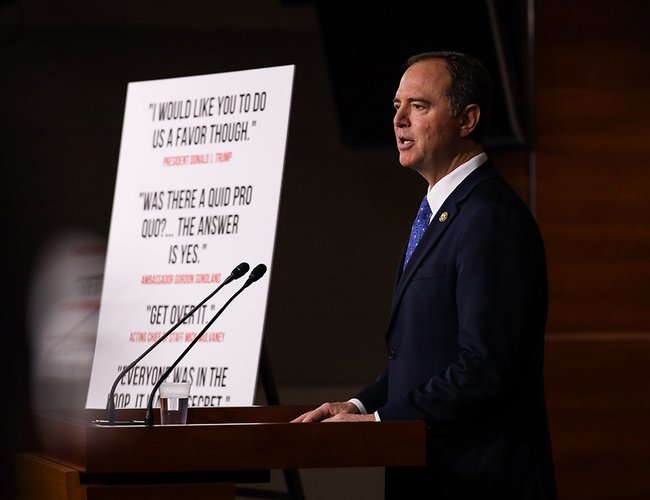 The House Intelligence Committee's report on Trump's Ukraine dealings is a roadmap for lawmakers drafting articles of impeachment.

The 300-page House Intelligence Committee report, which is expected to form the basis for articles of impeachment, also accuses Trump of engaging in an extensive effort to obstruct the House’s impeachment inquiry and deprive investigators of key witnesses and documents.

The report describes a president eager to use his leverage over Ukraine — a country at war with Russia — to extract political benefits ahead of the 2020 election. Trump allegedly conditioned military aid and a coveted White House meeting for Zelensky on his willingness to launch Trump’s desired investigations, including one targeting former Vice President Joe Biden.

“[T]he president placed his own personal and political interests above the national interests of the United States, sought to undermine the integrity of the U.S. presidential election process, and endangered U.S. national security,” the report concludes.

The Intelligence Committee formally adopted the report later Tuesday on a party-line vote, ahead of the first impeachment hearing in the House Judiciary Committee on Wednesday. Republicans offered seven amendments to the report ahead of the vote, according to people familiar with the matter, but all were defeated.

The Intelligence panel’s Republican minority has until Thursday to submit an addendum to the report; it will then be formally transmitted to the Judiciary Committee.

Intelligence Chairman Adam Schiff (D-Calif.) said his report uncovered “overwhelming” evidence that should be presented to the Judiciary Committee immediately for consideration.

And while there remains substantial investigative work that might point to a broader and longer-running pressure campaign than previously understood, Schiff said his panel had gathered enough evidence to present a persuasive case, and that it would be a mistake to wait for “every last fact.”

“I think what we have produced in remarkably short order is so overwhelming that it ought to be presented to the Judiciary Committee now,” Schiff said, leaving open the possibility of filing supplemental reports if more information emerges.

The report does not specifically recommend articles of impeachment against the president. But it provides the Judiciary Committee with a road map as it prepares to consider the evidence and draft articles in the coming weeks — and it outlines a historical precedent for the impeachment process.

Democrats are expected to draft at least two articles of impeachment: one on abuse of power and another on obstruction of Congress.

The report describes a tangled web of contacts among an array of Trump associates and allies as the Ukraine effort took shape earlier this year — including previously undisclosed communications between these individuals and John Solomon, a former columnist for The Hill newspaper whose writings have animated GOP defenses of the president.

The call logs, which the committee obtained from telecommunications company AT&T, also show contacts between Giuliani and Kash Patel, a former Nunes aide who joined the National Security Council in February, in addition to other communications between an indicted Giuliani associate — Lev Parnas — and a GOP aide on the Intelligence Committee. Nunes and Parnas also exchanged several phone calls earlier this year, the logs showed.

Schiff declined to comment on Nunes’ inclusion in the report, but said: “It is deeply concerning that at a time when the president of the United States was using the power of his office to dig up dirt on a political rival, that there may be evidence that there were members of Congress complicit in that activity.”

Democrats have argued Trump abused his power in his dealings with Ukraine and then obstructed Congress’ efforts to uncover the alleged abuse. But their report also alleges “witness intimidation” against a handful of the top witnesses called to testify, adding a potential charge as they consider which “high crimes and misdemeanors” to formally allege against the president.

“President Trump issued threats, openly discussed possible retaliation, made insinuations about witnesses’ character and patriotism, and subjected them to mockery and derision,” Democrats found, suggesting it could discourage witnesses from coming forward in the future.

The report details the extent to which Trump sought to limit his administration’s cooperation with the impeachment inquiry — including his efforts to prevent senior officials from testifying before investigators and the executive branch’s refusal to turn over documents that were subpoenaed or otherwise requested.

Elections Is Just A Month Away: Alliance Is Making Is Making By Agencies 1 day, 7 hours ago

US Carries out Airstrikes In Syria By Agencies 1 day, 8 hours ago

A Massive Funeral Held For Woman Shot During Myanmar Protest By Agencies 5 days, 9 hours ago

Australian PM Is Vaccinated As Rollout Begins By Agencies 6 days, 8 hours ago