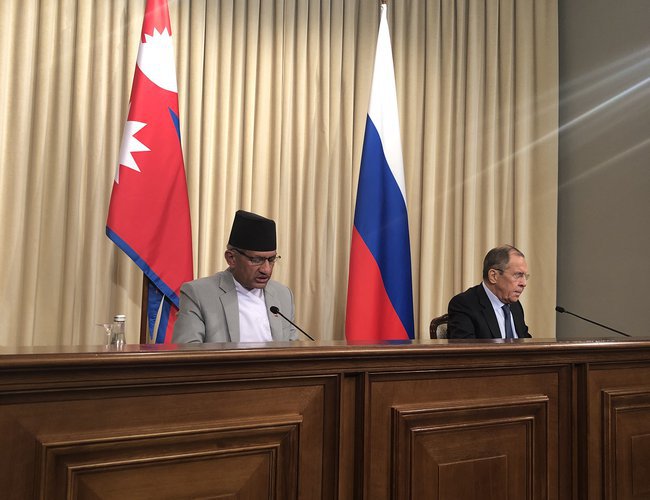 Rising as a global player in international politics after the dismantling of Soviet Union, Russian Federation has been trying to reach different countries around the world.

Nepal’s foreign policy mandarins are also looking to renew its relations with Russian Federation. The recent visit is highly significant in this context.

Recently, Nepal is gradually pursuing its policies towards China, Venezuela, Cuba and other blocks. Since Nepal wants to pursue non-aligned foreign policy, the present visit to Russia has its significance. Although Russian Federation and Nepal have been regularly conducting visits, such as that of chief Justice of Russian Federation and Chief Justice of Nepal in the last many years, the visit of foreign minister Gyawali took place almost after the lapses of fourteen years.

Foreign minister of Russian Federation Sergey Lavrov said that the visit of Foreign Minister Gyawali is important in view of the gap of 14 years since the last visit from the Nepali side.

Foreign Minister Pradeep Kumar Gyawali stated that this visit was an indication of the importance Nepal attached to its friendship with the Russian Federation, particularly in the fundamentally changed national context.

Foreign Minister Gyawali held delegation-level talks with Sergey Lavrov, Foreign Minister of the Russian Federation, in Moscow. The bilateral meeting was held in a cordial atmosphere. 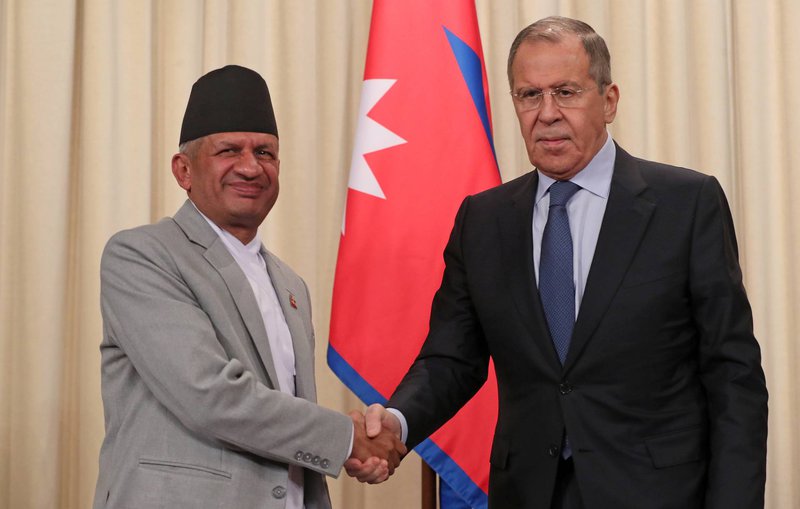 The two Ministers exchanged views on various aspects of bilateral relations. They underscored the importance of the exchange of high-level visits, including the judicial, parliamentary and business exchanges. Minister Gyawali handed over the invitation of the President of Nepal to the President of the Russian Federation to pay a state visit to Nepal. He also handed over the invitation of the Prime Minister of Nepal to the Prime Minister of the Russian Federation.

Russia and Nepal have agreed to sign a military and technical cooperation agreement, Foreign Minister Lavrov said on Monday after talks with his Nepalese counterpart Pradeep Gyawali.

"The Russian aviation equipment has proved itself to be good in high-mountain conditions of Nepal. Mi-17 helicopters supplied earlier are operating in Nepal and plans are in place to develop the interaction in this sphere for the future," he noted. Speaking at a joint press conference, Gyawali said Nepal would like to be a full-fledged SCO (Shanghai Cooperation Organization) member.

"We actively participate in the work of such organizations as SCO, in which we have had the dialogue partner status since 2015," he said. "Of course, we would like to be granted a full-fledged membership, for doing which we will require the help of founding countries, including Russia," he added.

The Ministers agreed to harness the immense potentials to enlarge the scope and enrich the substance of the bilateral cooperation especially in the areas of investment, trade, tourism, education, energy, infrastructure development, and culture and people-to-people relations.

The two sides underlined the need of building a strong economic partnership commensurate with the bond of friendship they have been cherishing since the establishment of diplomatic relations in 1956. They agreed to explore ways and means for enhancing economic and trade relations for mutual benefit. Through his Russian counterpart, Minister Gyawali encouraged Russian entrepreneurs to invest in Nepal in view of an investment-friendly environment.

Nepal acknowledged with thanks the Russian cooperation in many areas, ranging from post disaster support of 2015 to human resource development, infrastructure development to cultural cooperation. In the context of Visit Nepal Year 2020, Nepal also invited more Russian visitors to Nepal.

Minister Gyawali, stating that climate change is high on agenda of both the countries, invited minister Lavrov to participate in the Sagarmatha Sambaad to be held in Kathmandu in April 2020.

Speaking with NRNA representatives, Minister Gyawali appreciated the active role being played by Nepali Diaspora in Russia for the promotion of trade, investment and people to people exchange.

He addressed the Institute of International Relations in Moscow on Nepal-Russia relations and cooperation.

As the world is gradually moving toward multilateralism with the rise of Russian Federation in the global politics, the visit is highly significant.

EU And Nepal To Close The NEARR Facility By NEW SPOTLIGHT ONLINE 5 days, 9 hours ago