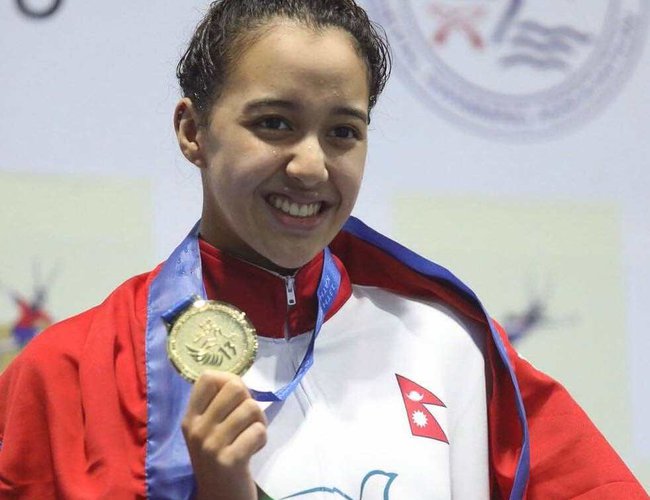 The aqua queen of Nepal, Gaurika, set a new national record by being the youngest athlete to win the two gold medals at South Asian Games.

Earlier on Friday, the record of the Nepali youngest athlete winning a gold medal went to golfer Subash Tamang after he won an individual gold. However, Tamang enjoyed his record for only three hours before Gaurika broke it.

Golfer Tamang, 17, has, however, become the first ever youngest player to win two golf gold medals in SAG. Tamang claimed two gold medals in the men's single and the team event.

Gaurika, 16, won her individual first gold medal in the women's 200 meters freestyle on Thursday. She also became the first Nepali swimmer to win three medals at a single edition of the SAG.

She completed her race in the 02 minutes and 17.73 seconds to touch a new milestone in Nepal’s swimming history. The Nepali side has awaited more records from her as she is scheduled to take part in six more swimming events in the 13th SAG.

After winning the individual second gold medal, Gaurika said that she was happy to win two gold medals in a row. “I am happy to win the double medals with my home supporters cheered me up while swimming.”

"I was mentally tired during the swimming and I am in doubt whether I could win. But I was able to do that which was a happy moment for me.”

“Till now it has been going well for me and I will give my best in the upcoming six different events," Gaurika said.

"We have to win amany gold medals in the individual events to inspire the upcoming players and to mark to good status in the international. The home crowd was my main strength," Gaurika added.

Gaurika expressed that she had aimed to silver medals in the relay and said that she enjoyed participating in the team event.

In the finals held at Army Physical fitness centre in Lagankhel, Khadka won in the 52 kg category.

With this latest addition of a gold medal, Nepal’s gold count have climbed 45 in the 13th SAG.

Tiger Woods Seriously Injured In A Car Accident By Agencies 4 days, 12 hours ago