it was visited by approximately 59,959 Sri Lankans. 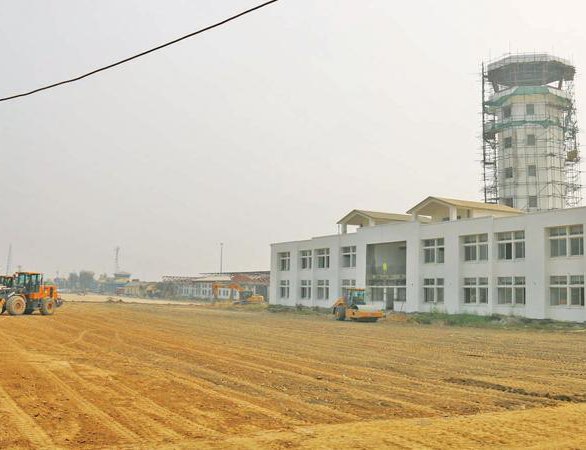 Nepal which is a fast-growing country in terms of economic development and infrastructure upgrading in the Asian region has embarked on an initiative to promote religious tourism in a big way. It is expected to support a promising sector in its economy by providing a seamless connection to a tourist attraction, Lumbini, the birthplace of The Buddha, which is a much looked forward to destination for visitors from around the world.

It is placed Buddhist pilgrims look forward to visiting. While the site attracts close to 1.5 million tourists all year round, last year, it was visited by approximately 59,959 Sri Lankans. With an objective to make things more convenient, the government of Nepal in collaboration with the Asian Development Bank (ADB) and looking forward to commencing operations at Gautam Buddha International Airport in mid-2020.

Upon completion, the Gautam Buddha International Airport (GBIA) is expected to serve 760,000 passengers by 2030, including 280,000 visitors to Lumbini, which is 20 kilometers to its West. In addition to helping increase the number of visitors to Lumbini from the traditional markets of India, Myanmar, Sri Lanka, and Thailand, the upgrade is expected to increase the number of visitors from the People’s Republic of China, Japan, and the Republic of Korea, among others.

ADB approved the South Asia Tourism Infrastructure Development Project, of which the GBIA upgrade is a part, in November 2009 to develop and improve tourism-related infrastructure in Bangladesh, India, and Nepal. The Nepal portion of the original project is funded through a loan and a grant from ADB’s Special Funds resources, each equivalent to $12.7 million, a loan from OPEC Fund for International Development ($15 million), and the Government of Nepal for $6 million.

ADB’s additional loan of $30 million in 2014, along with $17.7 million from the Government of Nepal and $3 million from the Asian Clean Energy Fund (ACEF), will finance the overall project cost of the Nepal component that is now estimated at $97.2 million. The additional financing supports the restructuring of the project including the increased scope of the GB-A from the originally designed regional international airport to a full-fledged international airport that can accommodate wide-body planes. The scaling up of the original upgrade design will add 400 meters to increase the runway length to 3,000 meters, overlay the existing 1,500 meter runway for use as a parallel taxiway, construct a new 15,169 square metre terminal building, improve drainage, and install more advanced navigational aids, equipment, and airport lighting for safety.

After completion of the upgrading, the GBIA will also serve as an alternate international air transport point for Nepal in the event of poor weather or in case natural calamity shuts down Tribhuvan International Airport (TIA), which is the only international airport in the country at present.

The Civil Aviation Authority of Nepal (CAAN) is the implementing agency for GBIA upgrading. ADB’s administration of a grant to be provided by ACEF for the additional financing will support the introduction of clean public transport services using electric vehicles for tourists and local residents in the Lumbini area. This will help reduce noise and pollution from poorly maintained diesel and gasoline engine buses and add value to the tourism experience. The Lumbini Development Trust is the implementing agency for the tourist destination improvement component.

During a recent visit to Bhairawa, Business Observer had the opportunity to visit the project site and inspect its ongoing construction work. As at present, the 3,000-metre runway has already been completed. While it will be connected to three linking taxiways, the administrative building, control tower and arrival, and departure terminals are still under construction. It is being built to accommodate all aircraft that operate at Kathmandu Airport and will also be Nepal’s second fully-fledged international airport.

“Right now there are one to two-hour delays in domestic flights due to air traffic,” ADB Nepal Resident Mission Senior Project Officer, Transport, Naresh Pradhan said. “This is a regional tourism project but there are other tourism components as well. The airport constitutes 70-80 percent of the major project funds. In the beginning, it was approved only as a regional airport but in 2012, the government decided to convert it to a fully-fledged international airport due to unpredictable weather conditions. In the event of a disaster, there is no other alternative airport for Nepal either. Considering this request, ADB decided to allocate additional funding of US $ 30 million to fund this airport,” he said.

In 2008, 1.8 million international passengers had visited Nepal but in 10 years, it has increased 2.5 times. Therefore, an urgent need has arisen for a more sophisticated air connectivity

“But we haven’t done much at Tribhuvan International Airport (TIA) although there has been a steady increase in arrivals of international tourists. Similarly, an upward trend in domestic passenger movements has also been observed. We don’t have much space to accommodate more traffic in TIA. There cannot be additional runways, parking base and taxiways due to space constraints. This is why Nepal needs this airport. The government has requested the extension of the terminal building and we are discussing it. In addition to that, we are also considering the extension of linking taxiways as well,” he said.

“The construction of the air cargo terminal building is currently underway. “Around five aircraft can be parked with some facility for push back area. This is a 4E category airport and we can accommodate Boeing 777-200, Airbus 330-300 aircraft, which are coming to TIA as well. The construction work of the project has been separated into two packages – international competitive bidding (ICB I and II) and works in both packages are going on in a parallel manner. The car parking area too is currently under construction. In order to achieve its progress, we have encouraged night work and hope to commence operations in mid-2020.” Chief Engineer of the project, Eng. Prabesh Adhikari said.

The contract was awarded to North West Civil Aviation Airport Construction Group, a China-based aviation contractor that has experience in constructing similar projects in the region. The project was supposed to complete in December 2017 but due to unforeseen events such as unauthorized contracts, government interventions, earthquakes, etc. the project has been delayed.

The project is estimated to cost Nepali Rs. 6.23 billion, with ADB funding close to the US $ 58.50 million. In addition to that, the OPEC Fund for International Development (OFID) is chipping in the US $ 15 million as loan financing. The remaining cost is borne by the Civil Aviation Authority of Nepal.

In addition to Lumbini, which is 24 kilometers away from the new international airport, tourists can also make a trip to Pokhara and Chitwan situated three hours and one hour away, respectively.

It was also revealed that Sri Lanka will be one of the first countries to start direct flights to Bhairawa, once the project is completed.

There are many direct economic benefits that Nepal will derive from Gautam Buddha International Airport. The GBA will have take-off and landing facilities for large aircraft such as Airbus A340 and Boeing 777. This will help reduce the existing air traffic congestion at Tribhuvan International Airport (TIA).

Nepal Trade Integration Strategy (NTIS) 2016 has identified a list of goods and services in which Nepal has a known comparative advantage. These include lentils, cardamom, and ginger, medicinal and aromatic plants, among others. Presently, these items are largely exported to India via road. But, export diversification of such high-value low volume products via airways will be feasible once the Gautam Buddha International Airport comes into operation. Off-season vegetables and horticulture products can be airlifted to Gulf countries via GBA. This airport can be an avenue to uplift Nepal’s trade with the rest of the world.

Nepal has signed bilateral air service agreements with a number of countries including Cambodia, Japan, Vietnam, and Sri Lanka where Buddhism is practiced. Presently, Buddhist pilgrims from these countries visit Lumbini via TIA or India. If this new international airport comes into operation, tourists from those countries can directly fly in and out of Bhairahawa, Lumbini. In sum, the airport will help propel Nepal’s tourism sector by bringing in more tourists. With the operation of the new international airport, migrant workers to Malaysia and Gulf countries from the Terai belt of Nepal can fly out directly from Bhairahawa for overseas employment.

The GBIA will also accrue many indirect benefits to the country. The Agglomeration effects will take off in terms of more hotels, bed and breakfast places and agro-processing industries being set up along the economic corridors. The exploration and development of other touristic destinations in the Terai belt of Nepal will gain momentum. These developments will help increase local employment and boost the regional and national economy at large.

NAC Committed To Passengers' Safety By Agencies 2 days, 16 hours ago

HOTEL ANNAPURNA Shut For Now By A Correspondent 4 weeks, 1 day ago