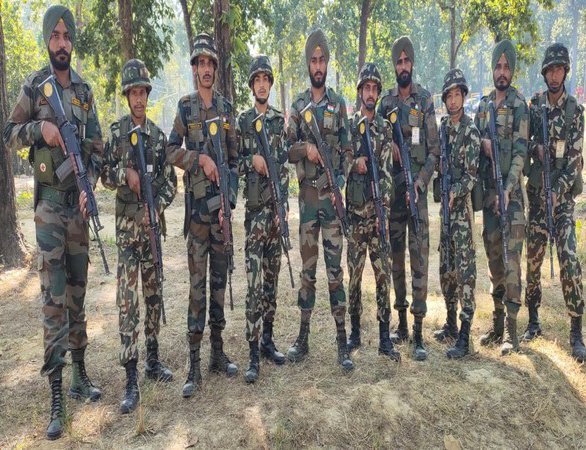 The sixth day of joint military exercise termed as Surya Kiran between India and Nepal in Nepal’s Rupendehi district centered around the detection of an Improvised explosive device (IEDs), sports activities including volleyball matches and joint training.

This is the 14th edition of the joint military exercise ‘Surya Kiran’ is conducted alternatively in India and Nepal. The purpose of this bilateral exercise is to conduct a battalion-level combined training between the Indian and Nepalese Army to improve interoperability at a military level in jungle warfare, counter-terrorism operations in mountainous terrain, humanitarian assistance and disaster relief operations.

On the sixth day of the Surya Kiranexercise, a friendly volleyball match was conducted between the two countries. A lecture on various types of IEDs was also organized by the Nepali Army in which Indian troops were demonstrated various types of IED techniques and booby traps which are used against the security forces.

The lecture also emphasized on means of avoiding accidents due to IEDs and their safe destruction. Troops of the Indian and Nepali Army also carried out a joint practice in a jungle with mountainous terrain.

The thirteenth edition of India-Nepal joint military exercise was held at Pithoragarh, Uttarakhand from 30 May to 12 June 2018 with the aim of strengthening defense cooperation between the two neighboring countries.

The Surya Kiran exercise had seen participation of nearly 300 soldiers from both Indian and Nepal Army who shared their experiences gained during conduct of various counter insurgency and counter terrorism operations in past.

Surya Kiran series of bilateral military exercises alternatively in India and Nepal. It is one of the largest exercise in terms of troop’s involvement in series of military training exercises undertaken by India with other allies. It aims at promoting defence ties and enhancing interoperability between the armies of both nations.

The 12th edition of Surya Kiran exercise was held at Nepal Army Battle School (NABS) in Saljhandi, Nepal in September 2017.