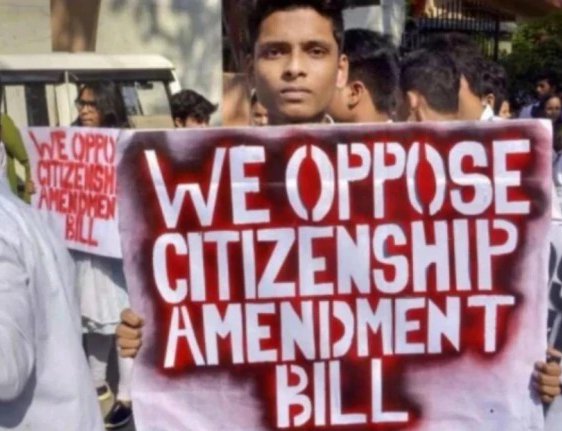 Police, in turn, resorted to tear gas to control the situation.

he protesters agitating against the amended Citizenship Act clashed with police on Sunday evening and set afire DTC buses and a fire tender in New Friends' Colony in south Delhi.

Soon after the violence, Delhi Police entered the Jamia Millia Islamia University campus and blocked the varsity gates to nab some "outsiders" who had entered the premises to hide.

Both the Jamia Millia students' community as well as the Teachers' Association have disassociated themselves with the violence and arson that took place near the university Sunday afternoon.

Meanwhile, Northeast continues to sizzle with the death toll in Assam touching four, after days of chaos. However, the situation in Assam is under control now and curfew has been relaxed during the day in Guwahati and Dibrugarh but night curfew is in force in these districts along with Jorhat, Golaghat, Tinsukia and Charaideo.

On Thursday, AMU students organised 'Open Talk' to protest against the Citizenship Amendment Act (CAA). Activist Yogendra Yadav was the other speaker at the event.

Hundreds of Aligarh Muslim University students and teachers, on Friday, organised separate protest marches and handed over two memorandums to authorities, demanding immediate withdrawal of the amendments made to the Citizenship Act.