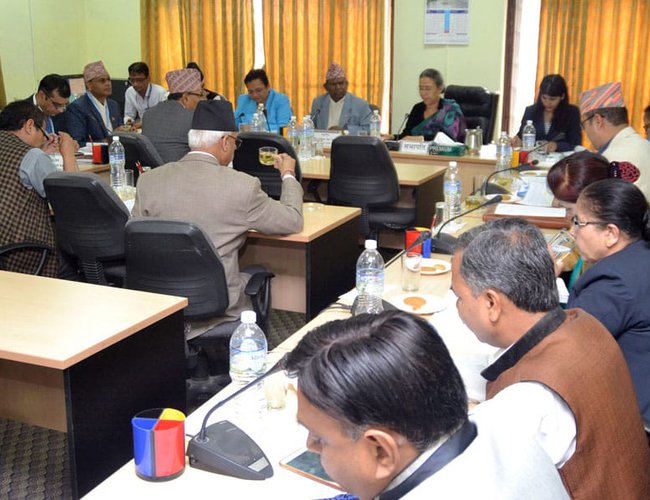 A meeting of Directive Principles and Responsibilities of the State of the Constitution Implementation and Monitoring Committee of the Federal Parliament directed the government to vacate the land encroached by India in Kalapani.

The committee also directed the ministry to issue the new map immediately and distribute to all government offices, school curriculum and other public places.

Replying to queries Minister for Foreign Affairs Pradeep Kumar Gyawali on Tuesday said that India was positive for dialogue on border problems.

"Authorities of Nepal and India are holding a meeting of the bilateral mechanism. They are discussing the possible date of the meeting," he said while speaking at the meeting of the Directive Principles and Responsibilities of the State of the Constitution Implementation and Monitoring Committee of the Federal Parliament.

Minister Gyawali said that the bilateral relations between the two countries and development cooperation would not be affected due to the border issue or while the talks were held.

According to him, a secretary-level mechanism will soon start working soon.

Minister for Home Affairs Ram Bahadur Thapa 'Badal' said that the government had started the process to establish border outposts at the disputed border areas. He said that the Cabinet had decided to make foot trail to link Limpiyadhura. Minister for Land Management, Cooperatives and Poverty Alleviation Padma Kumari Aryal said that the ministry was working in collaboration with the Ministry of Foreign Affairs in mapping the border area.

UN Commences International Day of Commemoration In Memory Of The Victims Of The Holocaust By NEW SPOTLIGHT ONLINE 1 hour, 59 minutes ago