New Year's 2020 Celebrated Around The World

New Year's 2020 Celebrated Around The World 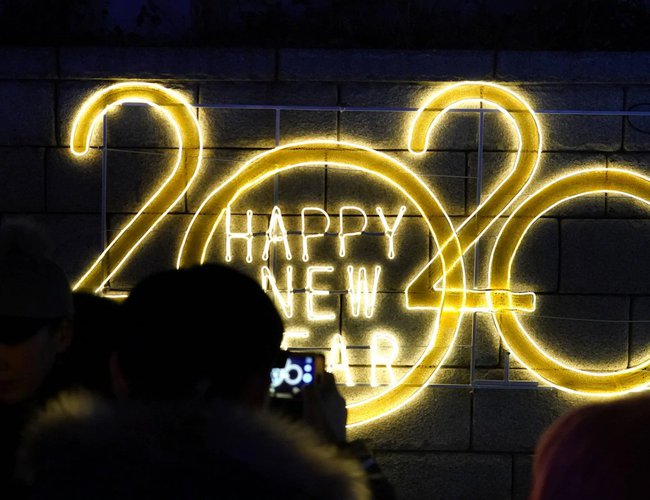 Along with the people across the world, young Nepalese also celebrated the New Year 2020 gathering at Thamel and other main cities including Pokhara and Patan.

Tourists and locals in Kathmandu kicked off the New Year with music and concerts.

People across the world are celebrating the end of the decade. Germany has joined much of the world in welcoming 2020. DW is tracking the New Year's festivities live.

Japan celebrates the start of the first full year of the Reiwa era, Sydney, Australia fireworks move ahead despite controversy. However, NYE protests disrupt festivities in Hong Kong, India and Lebanon.

02:00 2020 has officially reached the Americas: Some territories of Brazil and the tiny British Overseas Territory of South Georgia and the South Sandwich Isles, near Antarctica, welcomed the New Year.

The UK along with Portugal, Iceland and Ireland were among the last European countries to enter 2020. In London, partygoers watched fireworks displays over the London Eye ferries wheel in the nation's capital.

In Scotland, where New Year's Eve is called Hogmanay, thousands flocked to Edinburgh for the UK's largest street party. Scotland's national poet Robert Burns is the composer of internationally well-known New Year's song Auld Lang Syne, which is traditionally played at midnight in many countries.

In Israel, Jewish New Year or Rosh Hashana was celebrated on September 30 2019, but many celebrations were still expected across the small country. Many Israelis will be hoping for political stability in 2020 as Israel heads to the polls in March for a third time within twelve months.

Western Russia, including the capital Moscow, is officially in 2020. With 11 time zones, Russians began the world's longest continuous New Year's Eve with a message from President Vladimir Putin urging them to work together. The message was broadcast on television before midnight in each of the 11 time zones.

Countries in the Horn of Africa and East Africa, Turkey, Saudi Arabia and Iraq were among other time zones jumping into the New Year. In Saudi Arabia, a rare plan to have a New Year's celebration with fireworks and a DJ near Riyadh was reportedly banned because it was unlicensed. The ultra-conservative kingdom has in recent years taken steps to implement social and economic reforms, including allowing more entertainment.

Both North and South Korea are also celebrating their New Year. Last year, North Korea moved its time zone 30 minutes forward to match Seoul's. Northern leader Kim Jong-un is also set to make a New Year address Wednesday to share his plans in case the United States fails to meet his deadline to alter its stance on denuclearization.

Meanwhile, in Seoul, revelers gathered en masse for the Bosingak bell-ringing ceremony. The ceremony, which involves ringing a large bell, has brought tens of thousands of celebrants to the square since 2006. Multiple major fireworks displays also took place around the city. But it's not just the fireworks that people were waiting for. In South Korea, it's also popular to celebrate by watching the first sunrise of the year.

The Solomon Islands, a nation of about 611,000, also kicked off 2020. This year, the small country dealt a blow to Taiwan's international image by severing ties with Taipei and establishing diplomatic relations with China.

Tuvalu has become one of the forefronts of the climate change discussion, as both residents and scientists fear that its nine islands, consisting of a total of just 26 square kilometers (10 square miles) could become completely submerged within the next 50 to 100 years.

NAC Brought 17 Death Bodies Of Nepalis From Malaysia By Agencies 2 days, 13 hours ago