Two Nepali Men Drown In River And One Survived

Two Nepali Men Drown In River And One Survived 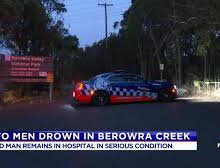 Two Nepali men died and a third is fighting for his life after a swimming tragedy at a river in Berowra National Park at Hornsby Heights on Friday night.

According to Australian media, those were killed were Bishal Shedhai,26, and Roshan Chhatkulli,23. However, Pradeep Pande survived.

According to Australian media, he sounded the alarm about 7pm and emergency services arrived around 7.30pm where a man was pulled from the water with breathing difficulties.

"They said they couldn't swim and they panicked, and that's when we got told to run over," eyewitness Neesha Bozinovsky told Nine News.

He was airlifted to hospital in a serious condition.

A search was conducted for two other men, aged 26 and 23, who had failed to resurface before police divers located and retrieved their bodies around 11.30pm.

"I don't know what happened, they must have just sunk down there in the muddy water," Daniel Lohini, one of the victim's uncle told Nine News.