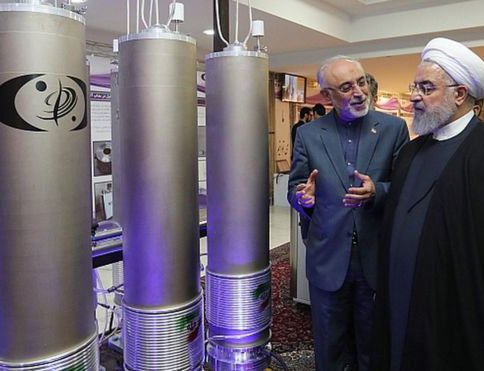 Iran has declared that it will no longer abide by any of the restrictions imposed by the 2015 nuclear deal.

The announcement followed a meeting of the Iranian cabinet in Tehran.

Tensions have been high over the killing of Iranian General Qasem Soleimani by the US in Baghdad.

Reports from Baghdad say the US embassy compound there was targeted in an attack on Sunday evening. A source told the BBC that four rounds of "indirect fire " had been launched in the direction of the embassy. There were no reports of casualties.

What happened on Sunday?

Hundreds of thousands turned out in Iran on Sunday to give Soleimani a hero's welcome ahead of his funeral on Tuesday.

Earlier, Iraqi MPs had passed a non-binding resolution calling for foreign troops to leave the country after the general's killing in a drone strike at Baghdad airport on Friday.

About 5,000 US soldiers are in Iraq as part of the international coalition against the Islamic State (IS) group. The coalition paused operations against IS in Iraq just before Sunday's vote.

President Donald Trump has repeatedly threatened that the US will strike back at Iran in the event of retaliation for Soleimani's death, and said it could do so "perhaps in a disproportionate manner".