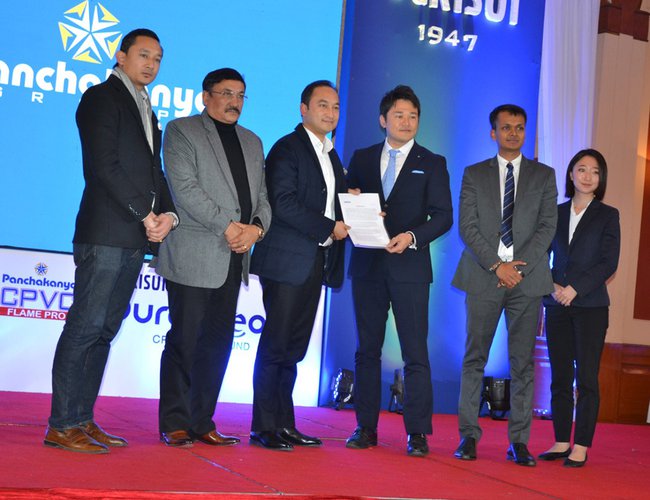 Panchakanya, a pioneer in the development of the plastics industry since its establishment in 1972, has launched Flame Pro and Transparent Fittings.

Apart from the Flame Pro series, Panchakanya Group also launched its new line of transparent fittings for hot/cold water and fire systems. The patented transparent compound is a special blend of CPVC developed by SEKISUI, Japan. Due to their transparency, the fittings give better visibility in plumbing workmanship and help to identify problematic fittings right away. T

he product also enables features of improved bond strengths, high color stability, good resistance to distortion, resistance to pressured hot water and many more. Hence, Nepal is the first ever company in Asia to introduce CPVC Transparent Fitting in the market.

The company proudly carries a history of taking the lead in introducing most of the newer technologies to the Nepalese market like HDPE, PVC, PPR and CPVC. In line with its slogan, “Always First, Always Ahead”, the company announced the launch of two new CPVC series at an unveiling program on 10th January at Radisson Hotel. The event comprised of a press meet which was then followed by a product unveiling of its two new CPVC products; Panchakanya Flame Pro (CPVC Fire Sprinkler Systems) and also its new range of patented transparent fittings for hot and cold water applications and fire sprinklers. The launch program was followed by a technical meet which comprised of the country’s leading architects, consultants and builders.