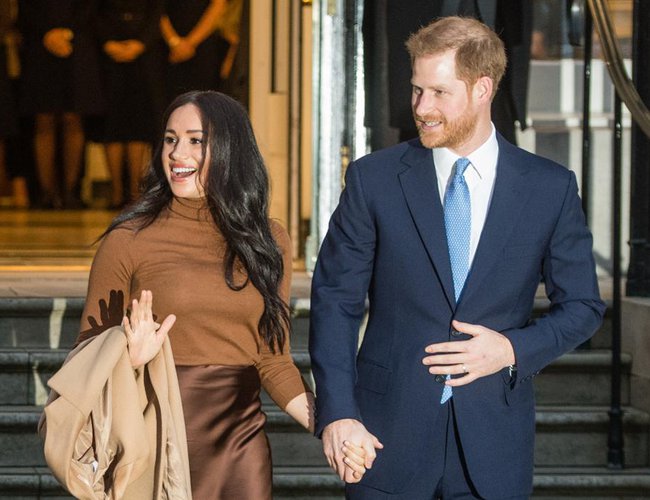 Prince Harry and Meghan will no longer use their HRH titles and will not receive public funds for royal duties, Buckingham Palace has announced.

The couple will also no longer formally represent The Queen.

The Duke and Duchess of Sussex intend to repay £2.4m of taxpayer money for the refurbishment of Frogmore Cottage, which will remain their UK family home, the statement added.

Harry and Meghan are to drop their HRH titles and repay $3.1 million in taxpayer-funded refurbishments to their U.K. home, ending days of speculation about what shape their new role will take after announcing they would “step back” as senior members of the British royal family.

The Queen issued a statement on Saturday: “Following many many months of conversations and more recent discussions, I am pleased that together we have found a constructive and supportive way forward for my grandson and his family.”

For the first time, Queen Elizabeth II publicly acknowledged the “intense scrutiny” that the Sussexes had been under, which the couple have spoken about several times, and which some commentators have criticized for having racist undertones.

“I recognize the challenges they have experienced as a result of intense scrutiny over the last two years and support their wish for a more independent life,” she said.

The couple will no longer formally represent the Queen. Buckingham Palace issued a separate statement that read: "As agreed in this new arrangement, they understand that they are required to step back from royal duties, including official military appointments. They will no longer receive public funds for royal duties.”

It added: “The Sussexes will not use their HRH titles as they are no longer working members of the Royal Family.” HRH refers to ‘His/Her Royal Highness’ and is used by some royals.

They will also continue to maintain their “private patronages and associations,” i.e. the charities they publicly endorse. Additionally, they will continue to uphold the Queen’s values, despite not formally representing her.

Saturday’s announcement follows a so-called ‘Sandringham Summit’ on Monday, in which Queen Elizabeth II, Prince Charles and sons Princes William and Harry gathered at her Norfolk estate to discuss the terms of Harry and Meghan’s future.

The couple will split their time between Canada, where Meghan is currently staying with son Archie, and the U.K. The family spent six weeks there over Christmas.

What we don’t know: Who will foot their security bill in Canada. While it is clear that the couple want to make their own way financially, starting with paying back refurbishment costs for Frogmore Cottage, their U.K. base, logistical matters such as security are yet to be decided and made public. Canadian Prime Minister Justin Trudeau said the decision about this was down to the couple as he spoke to Global News earlier this week.

Buckingham Palace said it “does not comment on the details of security arrangements. There are well established independent processes to determine the need for publicly-funded security.” The couple’s security bill is thought to be around $1.3 million USD (£1 million) a year.

Over 10 Reportedly Killed In Myanmar Protests By NEW SPOTLIGHT ONLINE 1 day, 6 hours ago

Elections Is Just A Month Away: Alliance Is Making Is Making By Agencies 4 days, 5 hours ago

US Carries out Airstrikes In Syria By Agencies 4 days, 6 hours ago