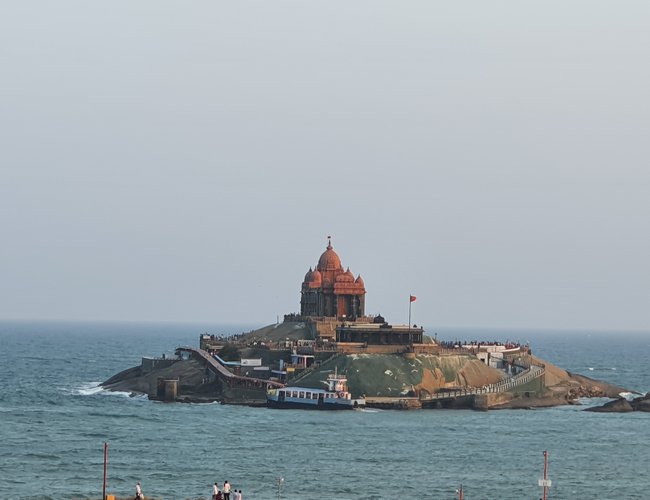 In light of the roiling of old values not just in India (its citizenship debate, attack on JNU Marxist culture etc.) but also in Nepal (a rape-charged speaker of parliament replaced by a murder-charged one ostensibly to ease the passage of a flawed donor aid package, all corruption scandals swept under the carpet because both ruling and opposition parties deeply implicated in them etc.), I was tempted to title this piece, "Does Western Liberalism have a Future in South Asia?". Butsuch an article would demand addressing too many angles that a short op-ed could hardly do justice. I, therefore, place before you only my preliminary musings from an academic/cultural trip to South India a month back, hoping to bring to the fore some of the contextual historical contradictions of Modi government's driving ideology.

A car trip starting from Chennai took us through Mahabalipuram (with its 7th Century Pallava kingdom rock monuments where Modi and China's Xi held their summit a few months back); Kanchipuram with its famous Varadharaja Perumal Vishnu and Kamakshi Amman temples as well as the Math of Shankaracharya; Tiruvannamalai with its Ramana Maharshi Ashram popular with Americans and Europeans, Arunachaleshwar Shiva temple as well as the eponymous Jyotirlinga hill; Tiruchirappalli (Trichy) Ranganathaswamy Vishnu and Jambukeshwarar Shiva temples, Thanjavur (Tanjore) Brihadeshwara Shiva temple opened to Dalits by its trustee Raja way back in the 1920s, and a visit to one of the oldest major river diversion, the Grand Anicut on the Cauvery that made its delta the rice bowl of Tamilnadu; Madurai Meenakshi (Amman Swami Sannathi) temple; Rameshwaram Shiva temple (one of the major four Char Dhams); and Kanyakumari Bala Devi temple and the Vivekananda Memorial Rock. The trip ended finally in Thiruvananthapuram (Trivandrum) with its 500BC Padmanabham Vishnu temple adored with Saligrams from Kali Gandaki, said to have been brought all the way from Nepal on the back of an elephant, with a night stay at the "Thamel of Kerala" Varkhala beach thrown in as a bonus. (Because of time constraint, we missed visiting the famous and today controversial Sabarimala Ayyappan Kumar Kartikeya temple near Nagarcoil on the way from Kanyakumari to Trivandrum.)

What strikes anyone visiting these places is the sheer grandeur of these age-old monuments. The rock carvings and structures can stupefy a modern engineer, but the fact that they have stood for so long amazes the historian in one. What also amazes any moderately practicing or even non-practicing Hindu from the north is how South Indians wear their Hinduness on their sleeves so to speak (or their foreheads and dresses, more accurately) confidently and without any coy self-consciousness.

Why is it that no North Indian or even Nepali temples match their South Indian counterparts in splendor? There are probably three main factors at work. First, the lower Deccan plateau is geologically more stable than the Himalayas and their piedmonts or adjacent Ganga plains, and high Richter earthquakes are practically unknown. Any rock temple in the north of such size and taking generations to complete would collapse into rubble in half a century or less. Second, with a much more stable rock foundation, these areas also do not face devastating flood events with river course changes of the scale that the north does. Temples built on one bank in the plains of the Himalaya-Ganga would either be washed away in a major flood or find itself on another bank in no time since Ganga and its tributaries are notorious for shifting course due to massive sedimentation that makes them conveyor belts of Himalayan erosion to the Bay of Bengal.

The most important seems to be the third reason: these areas are just south of the line of the maximum southern limit of the Moghul empire. Yes, they have had Muslim rulers in their northern edges, but these have been more tolerant and less iconoclastic than the earliest Ghaznavis or the latter Aurangzebis. Indeed, similar to Nepal which saw raid, plunder and desecration of Pashupati temple in the 14th Century by Samsuddin Iliyas of Bengal, these areas have seen raids and temple plunder by Muslim rulers but no sustained long-term Muslim rule. Indeed, the Muslim raid seems to have united fractious infighting Hindus, whether Mallas of Kathmandu or Vijayanagara of the South to unite and forge stronger kingdoms that put religious and cultural preservation as their top priority. Damaged temples were quickly restored or even expanded to their present grandeur.

The result has been a South India, like Nepal, that has not really felt any sense of real threat to its Hinduness, unlike Mughlani Hindus of North India where the centuries-long, iconoclastic Muslim rule rankles to this day. Hence the emergence of strong emotional motivation for restoring Ayodhya on the Saryu, Somnath in Gujarat, Gyanvapi in Varanasi and many more to their earlier status. BJP has come to power riding on these deeply felt sentiments that are absent in Nepal or South India.

This is also where North Indian Mughlani Hindutva that dominates media discourse differs so dramatically with the Hinduness in South India and Nepal. In Nepal, Tantrik traditions of both Shaivism and Buddhism are much more egalitarian than the "ritualistic purity" dominated West Indian ones; and many Nepali Hindus have never really felt at ease or sympathized with the BJP-advocated Hindutva. The story seems to be the same in South India which has preserved Vaishnavite, Shaivaite, Tantrik, devotional as well as philosophical traditions in unbroken continuity for ages. The emotional need to assert their Hinduness in BJP Hindutva style does not quite resonate in these culturally rich parts of South Asia.

This is not to state that Hinduness (as opposed to Hindutva) is not important to Nepalis or South Indians. Indeed, more South Indians seem to be upset at Nepal losing its Hindu identity with the advent of atheistic communism and the 2015 constitution of Nepal than North Indians and sometimes even ordinary Nepalis! And two stories bring home that point.

Some years ago, a few of us from the Mekong and Ganga basins banded together to start the Mekong-Ganga dialogue on rethinking water development. This was because both the Mekong and the Ganga were "civilizational rivers" (indeed the name Mekong or Mae Khongkha itself is a Khmer-ified pronunciation of the Sanskrit Ma Ganga). Given that India had to be central to this endeavor, a well-connected to government Delhi NGO was chosen to take the lead. During our trip to the Mekong, our South-East Asian friends were able to take us to sites of cultural significance there to help us understand its significance; but our Delhi partner could not take the Mekong visitors to Hardwar, Varanasi, Allahabad or any such place of riverine cultural significance. Instead, they took them to visit the Taj Mahal in Agra. It upset not just the many non-Mughlanis among us but also the Mekongstanis who saw it as interesting tourism but having little value in understanding the Ganga civilization. This was, if nothing else, a glaring example of Lutyens Delhi Liberalism's civilizational myopia.

An exact opposite is the story of how the Vivekananda Memorial Rock came into being. It is also a story of how the of people in South India are confident in their Hinduness and support its expression in public life. This rock at the southernmost tip of the South Asian landmass is where Swami Vivekananda received his epiphany that helped him initiate modern Vedantic renaissance within a deep-seated social reform mission. For his centenary in 1962, a plan to develop a memorial on this rock was mooted. It was, however, bitterly opposed not only by Nehruvian Congress that ruled Delhi as well as Madras but also the Indian Communist Party that ruled Kerala and the Christian fisherfolks around Kanyakumari. However, it took a retired RSS general secretary Eknath Ranade just eight years of intense diplomacy to over-ride all these objections and raise funds from the public as well as almost all Chief Ministers of Indian states not only to build the magnificent structure that currently stands but also the Vivekananda Kendra which does significant socio-spiritual works that have earned it the Gandhi Peace Prize of 2015.

This story of the Rock is worth pondering over to understand how the RSS functions, not just the methods it employs but also the deep commitment it brings to its tasks. That energy of renaissance requires the backdrop of non-Mughlani Hinduness which cannot be easily countered by urban dilettantism of South Asia's Liberal Left. And that is especially true when that kind of liberalism is losing ground in its own Western homeland with the collapse of Leninism in Russia and the rise of Trump-Boris nationalism in the Anglo-Saxon world. At the same time, the reactive North Indian Mughlani Hindutva will also not find much resonance, in Nepal or in South India, where the anti-Muslim sentiment in not anywhere as over-riding.